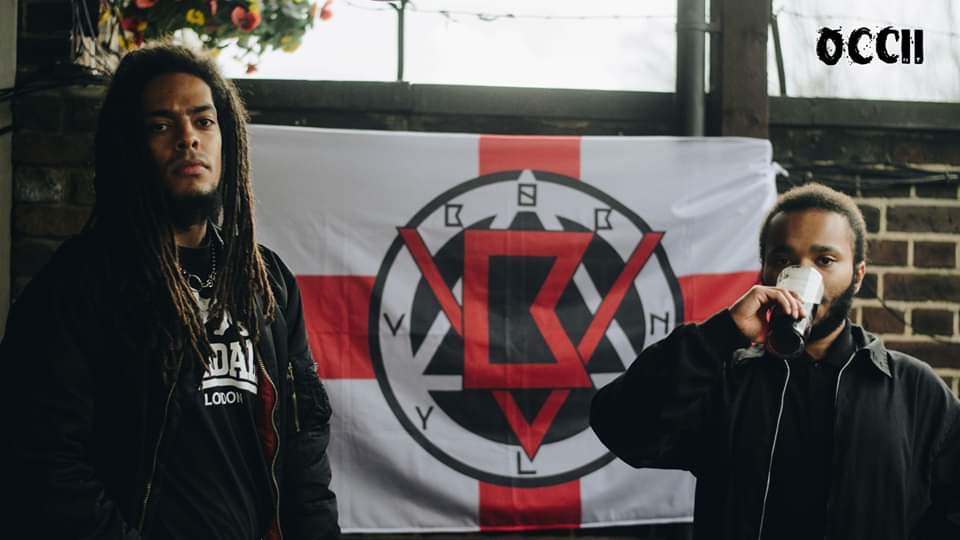 ”Making the best music this side of heaven, even when singing about Satan. These songs of death, sin and despair resonate raw power and stark beauty.” These are the openings words to Bob Vylans EP Dread, giving you a pretty good idea of the music they make.

Bob Vylan
GRIME / PUNK
“There’s a lot of artists working right now in the shredded space between rap and noise, but their take’s a little different.” said Noisey writer Colin Joyce when speaking of grime infused punk band Bob Vylan (pronounced Villain).
Based in London, with their roots in Ipswich and east London specifically, the group’s frontrunners Bobby (vocals and production) and Bobb13 (drums) take the speed and fury of punk bands like Discharge and Crass to create brutal punk instrumentals laced with sinister grime vocals. In one year their provocative stage antics have seen them play Afropunk London at the o2 academy Brixton and weeks later play Berghain in Berlin, as well as opening up for punk bands and rap acts from both sides of the Atlantic including, Akala, Nova Twins, Skinny Girl Diet, Mc Lars, and Bill $aber, while their offstage antics have seen them with various injuries and vocalist Bobby banned from London’s famous metal haven ‘The Crobar’.
Proving the Devil makes work for idle hands, the group self-produced, recorded, mixed, mastered and released their first EP “Vylan” in November 2017, just three months after their first gig. The EP centered on topics of power, compliance, life and death and was fuelled by a hatred of conformity and inequality. Continuing with their D.I.Y. approach, Bob Vylan started 2019 with their March release “DREAD”, an 8-track blend of punk and grime that at it’s core, is a reflection of present day England, volatile, violent and fed up.
Receiving positive press from the likes of Noisey, Gigslutz and Afropunk, with the latter calling DREAD “One of the best punk albums of the year thus far”, Bob Vylan hope to see DREAD become a sound of intrigue and terror for all that come across it.

GOOD READ & NICE VIDEOCLIP;..’ The video is D.I.Y and uncompromising just like the genres we blend (punk and grime) and it reflects the nature of the song…‘

Support: Inbranders
PUNK / HIPHOP / NU-METAL
Inbranders is a young punk band from Amsterdam with hip-hop and nu-metal influences. When they play the area surrounding them immediately evolves into a chaos of moshpits and ear-damage. Bring earpluggssssss!!