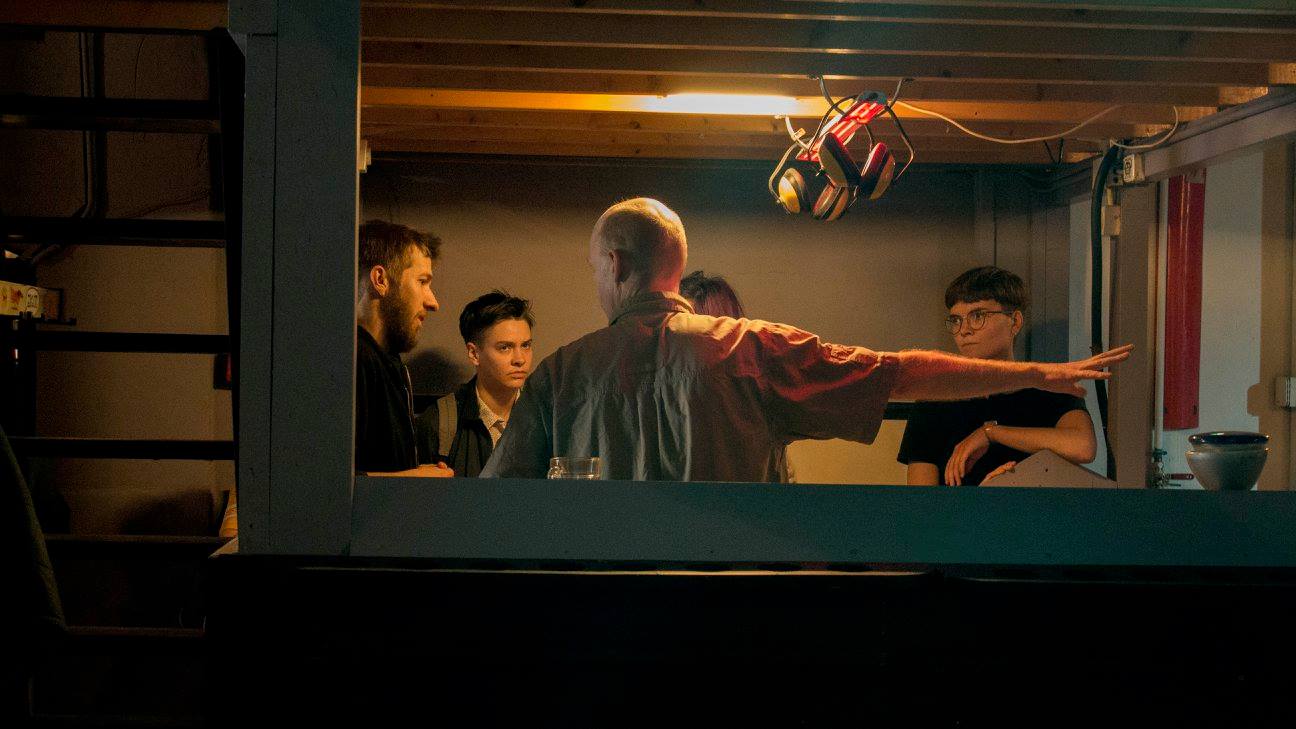 For the past twenty three years Gary has been doing sound in venues from The 13th Note in Glasgow to De Groote Weiver in Wormerveer, and the Vrankrijk and OCCII in Amsterdam. He explains the hardships of organising underground shows, the thrill of hearing the first song of a show, and queer nights in Amsterdam.

“That feeling when the concert is about to begin…” Gary says when we meet for dinner and beer. “There are 200 people, and the band is about to start. There’s a tension, an expectation. You’ve done all your preparations, and now it has to happen, and it has to go right. There’s no room for error. Then the drummer clicks in the first song and this big full sound hits the audience. People might be thinking: this might be the highpoint of my week. The public doesn’t see that up until that moment things have been chaos. But when the show starts, then you know the rest of the evening is going to be OK.”

How did you get involved with music?

I actually don’t like being on stage, but I still like to be involved in live music. So I started doing sound engineering. I did a three year college course for sound and video production, and while I was studying I started doing live sound too. I started in the early nineties in the old location of the 13th Note in Glasgow. I did sound for the 99 Pence Club and the Kazoo Club, which were on Monday and Wednesday nights I believe. There was this guy Alex who was organising the evenings, and he played in a band called The Blisters. Every time one of the other bands didn’t show up, The Blisters would jump onto the bill for the evening. That happened quite often. Many years later I was watching tv and I recognised Alex’s voice, and saw a show by his new band playing at Pinkpop in front of an audience as far as you could see. That happened to be Franz Ferdinand. Anyway, Alex used to organise nights and I would do sound for those nights, and occasionally I went on tour with local bands.

How did you end up in The Netherlands?

I had friends here that I met on tour, and that I met in Glasgow. So I knew a bunch of people. In 1998 I decided to come over, to look for sound engineering work for a year. In the beginning I had a lot of difficulties finding a place to stay. I was volunteering at some squats and that’s how I found housing in the end, and then I just stayed.

In 1999 I lived in the Esco Bar at the Amstel for a while. While I was there I started getting involved with OCCII. I did sound a number of times and I got to know people there. But then at the end of ‘99, early 2000, I moved to De Groote Weiver a squatted venue in Krommenie at the time, where I started doing sound and other volunteering work. Eight years later I moved to the Vrankrijk in Amsterdam and started doing sound there and at OCCII again.

The way it works for me is: I live in a former squat, and I have very low costs living there. But a certain involvement is expected and one of the main things that I contribute back is to help out with sound and technical support for activities. And that’s a role I really enjoy.

How did you learn Dutch so well?

When I moved to the Netherlands I had books for learning Dutch, they came with a cassette (laughs). I got started, and I would at least try to make some kind of conversation,although it was probably not very convincing. Pretty much within two weeks that I started living in the Netherlands I started working at Bier&Co. One of my jobs was to unload trucks, so I would be talking with the drivers, and there were drivers from Groningen to Limburg with all these weird and wonderful accents. I had to try and communicate with them. Years later I worked at XS4ALL on the helpdesk. So I was on the telephone for forty hours a week trying, to explain to elderly people in Dutch how to get their WiFi working!

What are your biggest frustrations while doing sound?

I don’t have so many frustrations. But my heart sinks sometimes when bands come in with these huge amplifiers. Then I know: this is going to be more about volume than it is about sound quality. When bands turn up their amps so loud, that means I have to turn up other instruments and vocals, and add more sound on top of the loud amps. That makes the volume irresponsible. I like it to be good and loud and full sounding, but not painful. One of the things that’s stupid about this is that guitarists like to turn up their amplifiers because they’re looking for a certain energy in the sound that you get when you turn up the amp. I understand that. However, when everybody in the audience is wearing earplugs, because it is so loud, they’re not gonna hear that energy. Which kind of defeats the purpose of turning up the amplifiers in the first place.

What is the weirdest or craziest thing you have every seen happen on stage?

I’ve seen a lot of crazy stuff through the years, but I must admit being rather amused recently by one of the performances I was doing sound for. After about 20 minutes of loud wailing and random keyboard playing accompanied by improvised drumming, the singer started batting raw eggs into the audience with a miked up tennis racket, not realising the venue was actually a vegan space. Oops!

You’ve done a lot of punk shows over the years and now you also do queer nights. How do you experience those nights?

I find the queer community in Amsterdam a very welcoming group of people. I suppose I have the feeling that I, just like them, don’t quite fit in conventionally anywhere. I’m not queer myself, however I feel myself at home in a group of people that is a little bit different. They opened my eyes to a lot of things. I’ve seen many of their performances, and heard a lot of the issues they’re dealing with. I thought I was aware of some of those issues, but they have really put a lot of things in focus for me. Also, I’ve been to some fantastic parties, and just had a really good time.

How is it possible that some environments make you feel welcome, and others don’t?

I suppose DIY environments in general make me feel more welcome than commercial places. In non-commercial spaces you are working mainly with volunteers, everyone shares the responsibility of running the space. I think that gives a better sense of achievement and working together. As opposed to being just a consumer, you are a participant.

Where do you go out when you don’t do sound?

I don’t go very often to shows when I don’t do sound. It’s something that I’ve spoken about to other people who help organise shows. They have the same feeling that we’re so used to being involved and working during an evening, and we’ve come to enjoy that kind of thing so much that when we actually go somewhere to just watch a band, we feel like we need something to do. Also, places like Paradiso and Melkweg I find extremely expensive. If I’m not already working at the Vrankrijk or OCCII, I go to places like OT301 or the Minds.

Where do you think the underground will be in 10 years?

We sometimes forget how unique some of these places are that we have in Amsterdam. Obviously I hope that all these places will still be around in 10 years time. I know that a lot of these places are under increasing financial pressure. I don’t think however that more professionalisation is always the answer to increasing financial pressure. Being more professional doesn’t necessarily make your venue ‘the place to be’. I think it’s just as much about who happens to be involved in an organisation at a certain time. People come and go. They bring energy and ideas and they inspire other people to become involved. Then these people start realising their own potential and become very active, for a while at least. Then their friends start coming along and getting involved, like a chain reaction. A certain professionalism can help run things well, but it’s the people that really make it happen.