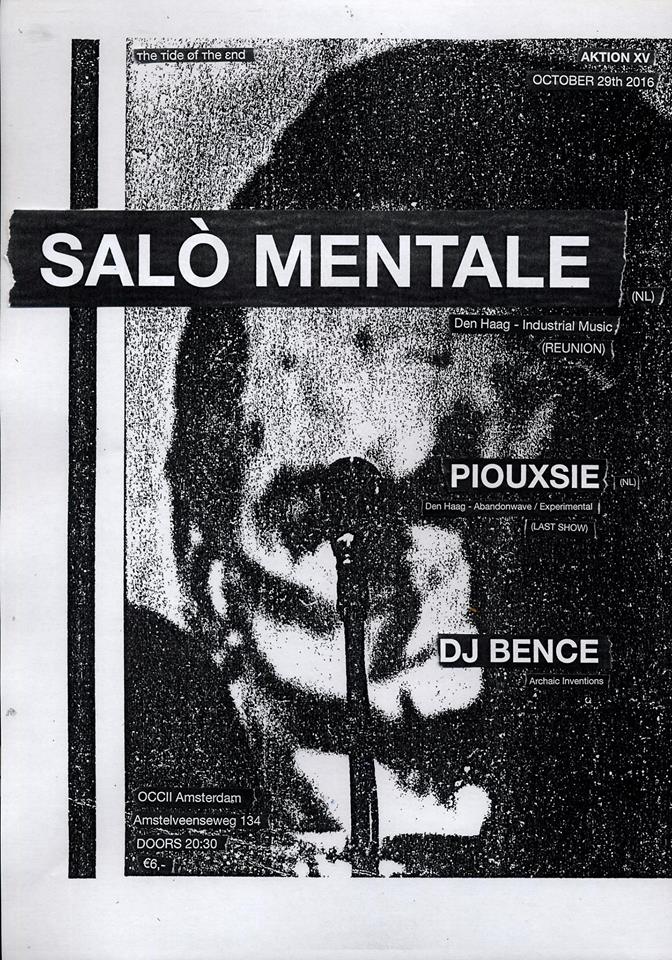 After being an active member of the punk scene for a few years Anthony Blokdijk founded Salò Mentale in 1984. The project went through various name-changes (De Gestalt, Salò Mortale, Abrahadabra and 418) and included numerous musicians over the years. Influences can be traced back to amongst others Throbbing Gristle and Coil as well as excessive drug use.

The result of their endless experimentations covers a wide range of sounds but neatly fits within in the realm of industrial in it’s widest sense. After fifteen years the project was laid to rest in 1999, some collaborations have sporadically taken place over the past years.

To celebrate the upcoming cassette release on тhe тide øf тhe εnd Anthony Blokdijk gathered a group of collaborators & members from various stages of Salò Mentale’s existence to perform once again on this memorable evening. Amongst the ranks for this evening is also Jan Duivenvoorden (Unit Moebius).

The cassette containing previously unreleased Salò Mentale recordings from the period 1988-1992 will be available during the show.

This collaborative duo consisting of Alina Valentina & Jessie Hoefnagel create stretched out auditory landscapes for their experimentation to roam freely. Previous appearances included State-X & SOTU. On this evening Piouxsie will play their last show (for now).

Digging deep into the most obscure corners of recorded music to present us some real otherworldy gems.