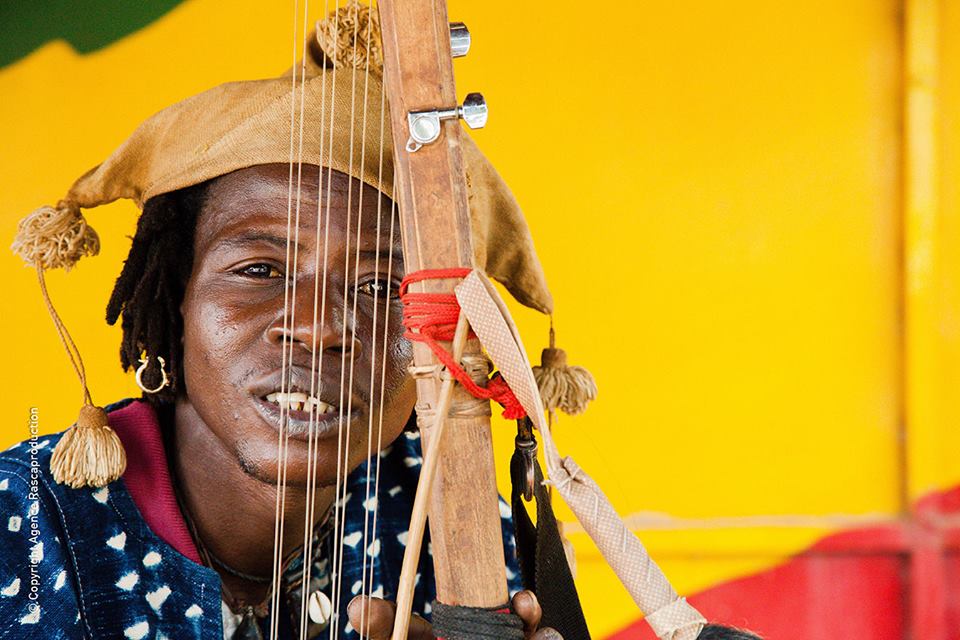 On Thursday 19 November, Baba Commandant and the Mandingo Band from Burkina Faso will play at OCCII with their special Mandingo style mixed with Afrobeat and punkrock spheres during the Rebel Up! Soundclash night. It will be their first ever show in the Netherlands and Amsterdam. Earlier this year their album ‘Jugaya’ was released on outernational label Sublime Frequencies and has rightfully given them some deserved attention which sparked this tour. So, who is this Baba and his band? We talked to Baba and got a look into his Mandingo world and vibe of the Burkina Faso.

They are a contemporary group, hailing from Bobo-Dioulasso in the west of Burkina Faso, close to the borders with Mali and Ivory Coast, heavily steeped in the Mandingue musical traditions of their ancestral legacy. Baba Commandant (aka Mamadou Sanou) is an enigmatic lead singer, an original and eccentric character who is well respected in the Burkinabé musical community. In the words of Sublime Frequencies; “A sort of punk Faso Dan Fani activist for traditional Mandingo music, Baba continues to redefine the boundaries between traditional and modern. Baba Commandant plays the ngoni, the instrument of the Donso (the traditional hunters in this region of Burkina Faso and Mali). His audience comprises multiple generations and strata of Burkinabé society; he accordingly adapts his repertoire to his surroundings, which range from cabaret Sundays in Bobo-Dioulasso to the sound systems of Ouagadougou. Baba Commandant and the Mandingo Band are a formidable force steeped in Ouagadougou’s DIY underground musical culture. Juguya is their sound.”

Baba’s career started at the tender age of seven, when he joined the Koule Dafourou troupe as a dancer, one of the youngest in a big group of 45 people, doing African ballet, dance and theater. This became his gateway into music. When their group leader died in the late 80’s, the whole group dispersed. A few years later, a grown up and 21 year old Baba moved to the Burkinese capital Ouagadougou and soon met other African ballet dancers with whom he formed the band San Mana Mana. From that moment he was on his current musical direction, he began to learn to play the ngoni, and he played the doundoumba drum. After four years that band broke up and he formed another group, Dounia, where he started to sing and wrote his first compostion, which was titled ‘Jugaya’.

In 2004 Dounia broke up and after returning to Bobo for a few years, Baba came back to Ouagadougou where he met other groups, did the rounds with his ngoni and started the Afromandingo band with musicians from his hometown Bobo. He explains in an email to me:

“We all loved Afrobeat and wanted to mix it with Mandingo music, the traditional sound of our region. We recorded our first album with the help of local French producer and studio boss Camille Louvel who owned the famous Studio Ouagajungle and who had supported us from the very start. Sadly enough, after 3 years we broke up and were not able to release the album officially. Camille invited me to work with him as an independent and to record the album again. He helped looking for musicians and instruments. It was 2010-2011 and the start of Baba Commandant.”

Baba and his band draw inspiration from the golden era of Nigerian music, with Fela Kuti/Africa 70 and King Sunny Adé as big influences, as well as the legendary Malian funk rock growler Moussa Doumbia. When Baba is not busy playing with the now-famous Burkinabé musician Victor Démé, all his time and energy goes into his own band. The main energy that pushes the band is his voice and their Mandingo style, which gives them pride of their heritage while playing for the Ouagadougou crowds. This combination of styles makes them one of the most special bands in the current Afrobeat scene. Mixing traditional and modern sounds is an all-African phenomenon and just as much in Burkina Faso. “We are not alone in this modern-traditional movement,” Baba says. “There are others who do it too in Ouagadougou, but we have chosen to make Afrobeat groove in our Mandingo tongue. It’s hard work and I don’t want to sing and sound like anyone else. In our creation and composition, the ngoni is important as we always begin to build a song around the ngoni and voice. Then we add the other instruments. That’s how our afromandingue style is made, our own unique style. The ngoni is the instrument of the hunters. It is actually never the hunter who plays, but the village musicians who welcome the return of hunting with praise and divine forces. It is an instrument which booms with energy, an almost mystical power.”

This will be Baba’s first European tour, 2 months in total, and we are wondering what he expects from the European public and the night at OCCII. His answer is short and clear: “The thing that I love most: lots of exchange. There are plenty of colors that I bring in my Afrobeat. I appeal to rockers and give as a rocker!”

Baba Commandant and the Mandingo Band will play OCCII on November 19th 2015. Listen to their music and find more tour dates on their bandcamp.