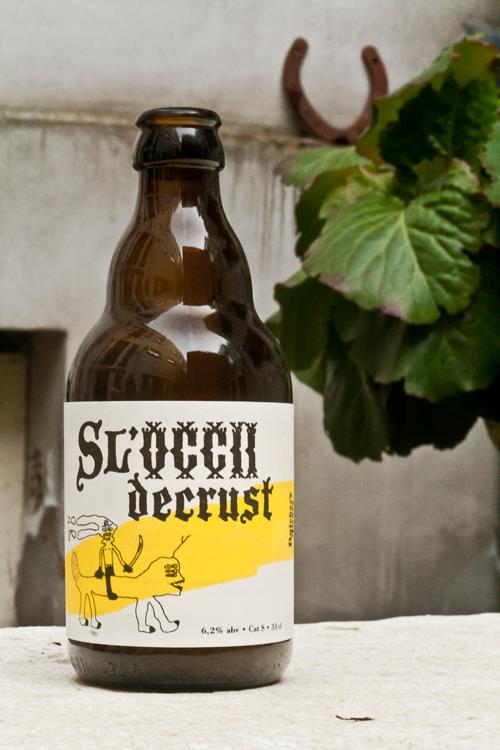 Last week the second edition of SL’OCCII In It, a special beer by Amsterdam brewery Butcher’s Tears, was presented. It’s a traditional full-flavoured English-style pale, quite different from the first SL’OCCII Decrust which was an amber beer with a smoky taste. Already a new beer is being brewed for autumn.Who are the brewers who make these beautiful beers for OCCII? Last year, when they had just made the first SL’OCCII beer, we spoke with Felicia, one of the founders of the brewery. Read the conversation (previously published in KNiK #2) below. 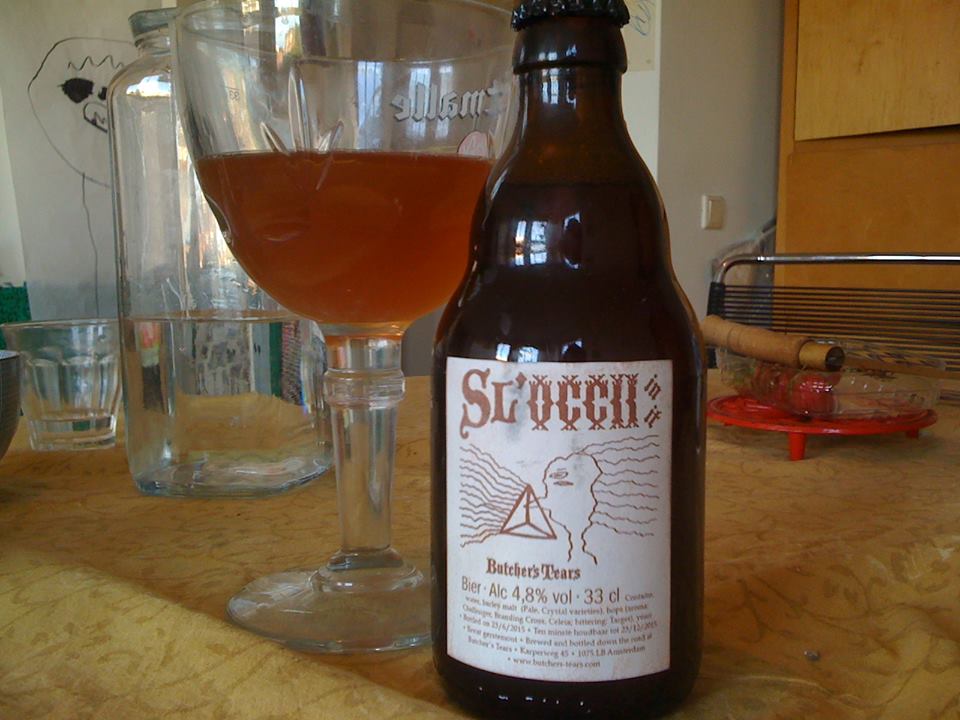 In the summer of 2013 Butcher’s Tears opened their doors with a beer tasting room in an alleyway in the south of Amsterdam, while starting to build their own brew house in the back. Butcher’s Tears initiator Felicia von Zweigbergk talks to KNiK about starting your own brewery and the connection between beer and art.

While it’s well over closing time Felicia lets the customers finish their drinks and asks a friend to take over her DJing role. We sit down at a table near the entrance as she tells how her interest in beer started. “My friend Ärkan and me were living in Sweden. We played in a band called Våld and it was on tour that we really discovered the variety of tastes in beer. In Sweden the state has a monopoly on selling alcohol, and most bars don’t have craft beer or beer from abroad, so when ordering a beer we would never say which beer we wanted, we would just say ‘A big beer, please.’”

Both of them were especially impressed with the British breweries. “The variety of beers that existed suddenly seemed endless, and we wanted to try it ourselves and started experimenting at home.” While Ärkan professionalised his beer brewing skills and became a brewing technician, Felicia studied at Amsterdam’s art academy Rietveld. When she graduated she started an art space called Lost Property, which she partly financed with home brews.

“A friend of mine at the art school told me about her dad who was a former bank man that started to help artists with their finances. I can imagine that most artists suck at finances,” Felicia laughs. “I showed him my estimations for a brewery, thinking I’d done a good job, but only a few things were right. Herbert, who later became the third and final member of Butcher’s Tears helped me with a proper business plan. And while we were making it, he himself became interested in investing.”

The Butcher
The name Butcher’s Tears soon followed. “Ärkan’s nickname was The Butcher, and ‘tear’ in Swedish is another word for ‘drink’ or ‘refill,’” Felicia explains. In 2012 they drove around town in a van, trying to sell their first beer Green Cap. “One of us would walk into the bar saying: ‘This is our beer, would you like to try it?’ Most of the time they said something about how it tasted ‘too much’ or that it was too bitter. Luckily, a lot of things have changed in the beer world since then, people are more aware of different beers and microbreweries now.”

In August 2013 they found a space in the warehouse of a scrap dealer in the south of Amsterdam. “This place is too good to be true, an untouched and wild area you hardly see anywhere in Amsterdam,” Felicia says. “We started from scratch and made the place ours.” The tasting room is very light, mostly in white tiles with the exception of some scribbles here and there. Felicia points at the elegant wooden picnic tables: “My friend Jair Strachnow made these. The tables set the standard of not bringing any readymades into this place.”

Butcher’s Tears comes close to being an art project, with its carefully engineered details and consistently executed principles. There are weekly music events and there art books that lay around for people to read.

Already half a year after opening its doors, Butcher’s Tears has a couple of regulars. “They take their spot and I got to know them a little,” Felicia smiles. “For example, at four o’clock, more or less every day, a local doctor walks in after his practice and has one or two dark ales. He likes the music that we play.”

It’s getting later now, but the ambiance is good, and people don’t seem to want to go home yet. The DJing friend passes by and places a saucer with nuts on our table. “When I was still in art school I was so negative about everything,” Felicia says. “The museums were shit, the art galleries were shit, nothing ever felt like something real. What I like about running a brewery, or even a bar, is that from a point in the background you get to construct the structure of an entity, or a world of its own. You create the conditions for something else. What we try to do here, is…” She stops to say her goodbye to a group of customers that wave to her. “It might sound pretentious, but what we try to do is to refine the senses. Because we put a lot of effort and mind into things, it can inspire people to become more selective and less compromised in their own lives too. It’s important that you take control, not just of your art practice or your ‘free’ time, but of your whole life.”

Butcher’s Tears can be found at Karperweg 45 in Amsterdam and at butchers-tears.com.