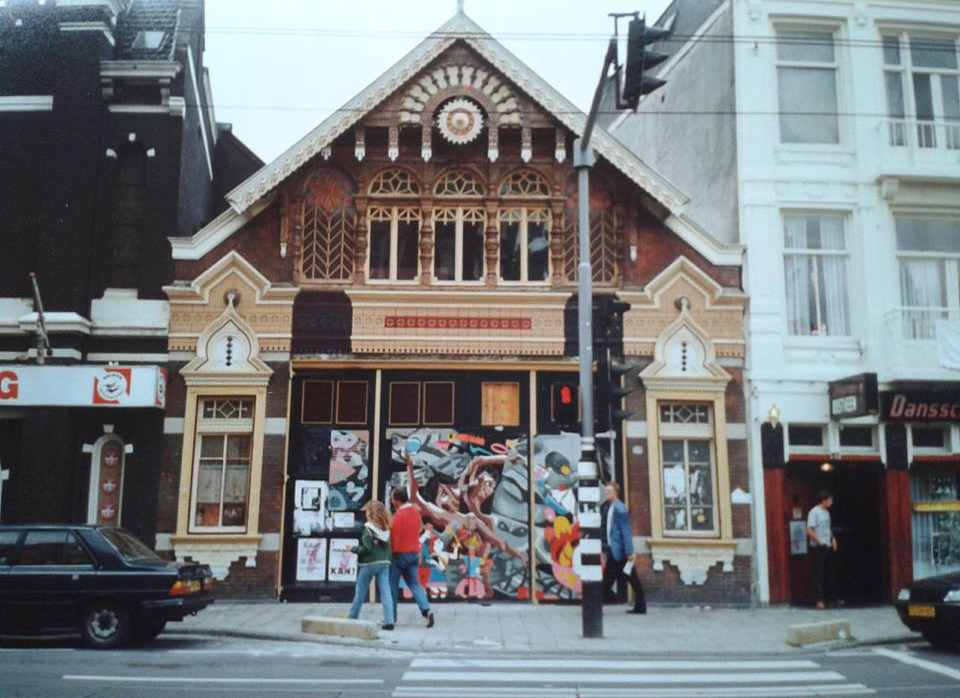 From the extensive rebuilding in 1992 to pouring concrete for a new floor this year, most of the OCCII jobs have been done by volunteers. We spoke with builders from different periods and found a little piece of OCCII history.

“In 1984 we were often asked: ‘Do you have room?’ It was a new squat, so people would ask if they could use it,” Meyndert says, a former occupant at Binnenpret, the complex of which OCCII is a part. “The OCCII was a vacant space back then where anything was possible: scenography, a meeting point before a demonstration, and sometimes a benefit concert. That lasted about ten years. The public space in OCCII wasn’t downstairs back then, but upstairs: that was where the Kasbah was, a squat café. That was the place you would meet each other in the evenings.”

Thus, one of the first things that was constructed in the OCCII building was a bar in the Kasbah. If Meyndert could have done it again, he would have done that first job differently: “Looking back I very much regret that I hadn’t thought about it better. The bar was completely straight. That was so stupid: at a straight bar everybody is sitting on one side of it facing you, waffling to you, and you can’t escape! Really, if you ever make a bar, make an angle in it, so people have contact with each other.”

One of the things Meyndert actually is proud of is the materials that he used when making the bar. It was part wood from the store, and part recyled materials: “The foot rails were from an old sports room,” he says. “A neighbour that often visited here worked as a sports teacher and the school was shutting down. He asked if we’d be interested in old balancing bars.”

After a few successful benefit nights in the downstairs room, the Binnenpret crew decided in 1992 to permanently turn the space into a concert room. It took them almost a year to insulate: a floating ceiling was made, a permanent stage was built, toilets were installed, a bar and a storage room for drinks were built. Edwin remembers the transition to a ‘real venue’: “In 1992 foundation In It was established, and the extensive rebuilding lasted until spring 1993. De Binnenpret got a contract for the ground lease, and because they knew that they could stay for a longer period, more time was invested.”

Even though the insulation of the roof was done very well, the side wall where OCCII shares a wall with a dance school wasn’t insulated yet. That was a problem, not so much, as you would expect, because the dance school was bothered by OCCII shows, but the other way around: “In the beginning we had a lot of theatre plays at OCCII,” Edwin says, “and it has happened that suddenly the Chicken Dance could be heard from next doors. That’s why we decided to build a double wall.”

In the following years all kinds of improvements were implemented. For example, central heating was installed. But an even larger difference was made by the arrival of a large refridgerator, according to Edwin: “OCCII was known for its lukewarm beer. We cooled the bottles in those small kitchen fridges. That meant that half of the time we could not serve cold beer.”

Around 2002 this changed. A group of Polish punks, zealous OCCII visitors, lived in an old butcher’s shop in the west of Amsterdam. When they left the place they took the old butcher’s fridge that was still sitting there. “They dismantled the whole thing, and we put it together again in OCCII. That’s the fridge that’s now in the drink storage, it still has Polish graffiti on it.”

A few years later a new problem arose: the floor around the bar was from paving stones that had grown more and more wobbly from the water that was used to clean the floor. It had become impossible to sit on a bar stool because of the wobbly floor. Also, the OCCII personel regretted that the venue wasn’t accessible for people in wheelchairs, there was an enormous threshold between the bar and the stage. “In 2005 we poured concrete to create a ramp, and we took away the paving stones,” Edwin relates. “While we were doing that, we discovered some remains from the first big renovation. In the floor behind the bar we found cut up shopping carts that were used to reinforce the concrete. It was surprisingly strong, and we didn’t manage to get it out.”

During the rebuilding of the floor, new electricity was also installed. Ries took this job upon himself: “In De Binnenpret there was a very old transformer, it was probably from the fifties or sixties. This meant that we could handle very little electricty on stage.” If bands brought their own lights, the fuses would blow. That’s why it used to be so dark in the OCCII, we always had to puzzle which powerboard could be on which circuit. With a friend of mine who is an electrican, I made a new main fuse box, and from there we dug gutters and installed groundcables to the appartments, the workplaces and the OCCII. Then discussions started about the lay-out of the venue. Where should the soundbooth be?”

The soundbooth was a project by both Nienke and Ries. “First it was positioned in the middle of the room,” Nienke says. “The bar volunteers often complained that they couldn’t see the stage, and that’s why we built the new soundbooth to the side of the room. We got help from Ed, who is a builder of playgrounds. We used many beams of wood, to make it a stiff contruction, and so that the recordplayers in the DJ booth on top would remain stable.”

The shape of the soundbooth, with its tilted sides, was well thought out. “We were always bothered by low droning basstones,” Ries remembers. “That was caused by the position of the front and backsides of the room: they are exactly opposite to each other. The tilted panels on the soundbooth help divert the basstones, away from the back wall of the venue. That way we can prevent some of the feedback.” 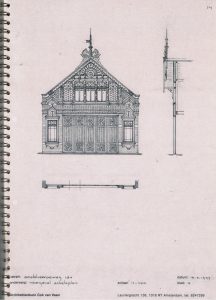 The renovation that was probably best visible for visitors, took place in 2011. In that year the facade of the OCCII was repainted in the original colours: brown with bright coloured accents, exactly the way the architects father and son Salm had designed it in 1883. Edwin: “We applied for a new license in 2011, to be allowed more visitors inside. In order to get this license we had to make the entrance wider, and we had to install emergency lights and a fire alarm installation. We decided to also make the stage a little higher so that more people could see it. It became an extended renovation.”

During this renovation, Artur was asked to think about the floor near the stage. “Edwin called me to ask if I could build a gutter to make the water flow away when you’re cleaning the floor,” Artur says. “So we opened the floor and installed a drain-pipe. But we saw right away that the floor was in a bad condition. There were two layers of concrete, one was very old, and it was poured right on top of bricks, without any reinforcement. The next layer of concrete was just badly reinforced, it was done in a very old-fashioned way, it was from a time years before OCCII was squatted.”

The two layers of concrete had to go. The past summer there was money and time to make it happen. With a team of volunteers Artur twined steel rods and poured 23 cubic metres of concrete. “You’re working long days,” Artur says, “and you know that at a certain moment a truck will drive into the street and it’s carrying liquid concrete, so you have to be ready for it. I was so relieved when the concrete was finally poured.” According to Artur the new floor will stay for quite a while: “For a long time, so long that I won’t have to be bothered about it in my lifetime anymore!”

This does not necessarily mean that all OCCII renovation works are over. But many of the jobs that were done over the past years were done so professionally that less and less intensive maintenance is needed. Meyndert, who has witnessed three decades of OCCII renovations, comments on the change from the early days: “Back then we didn’t do everything so thoroughly, but now renovations are done for the long term. We have always been careful with the building, but with the volunteers coming and going, we collected more and more expertise.” Edwin is happy with that accumulation of knowledge: “If you want to keep a place like OCCII running for a long time, then you’ll have to do things well. If you just run the place down, then at a certain point it’ll be the end of the story. That is going to influence the way in which people treat the space. On the other hand, if people help fix things in here, then they’re proud of them, and then the space also becomes a part of them.” He laughs. “But of course, you forget a lot too. Like the cut up shopping carts in the concrete. During renovations you are so consumed by what you’re doing, and once it’s done, you’re glad: we made it! – and then you don’t think about it anymore. On the one hand that’s a shame, on the other hand, that’s how it goes.” 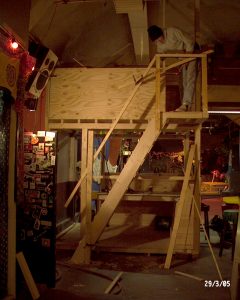