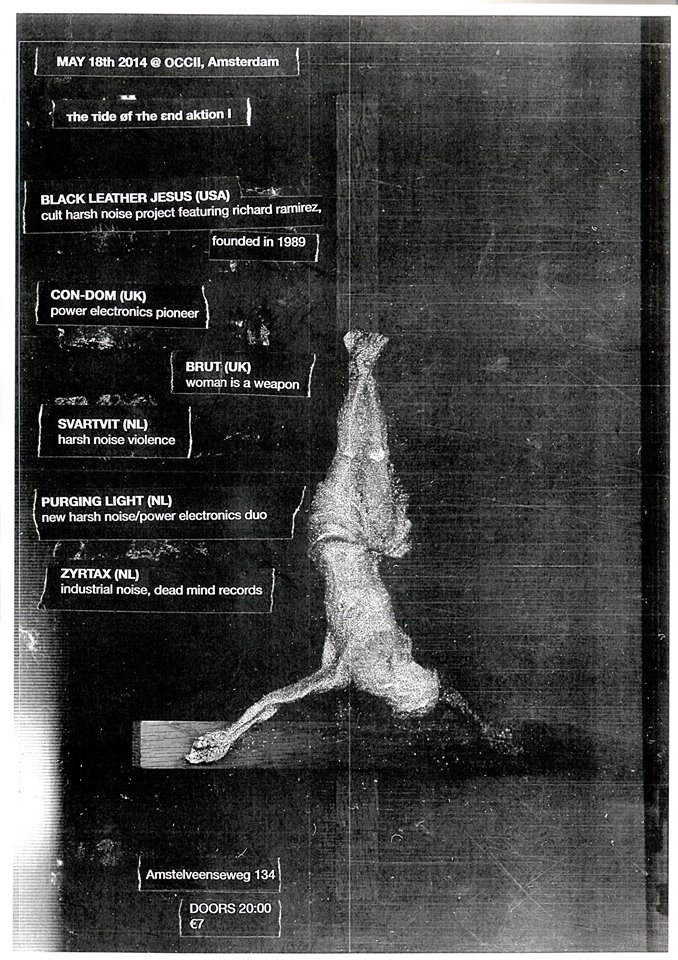 The first [ттøтε] AKTION features a diverse line-up of harsh noise and power electronics artists showcasing all sides of the spectrum.

Texas cult harsh noise group since 1989. The group was founded by Richard Ramirez whose well known for his other projects like Werewolf Jerusalem. They utilize sheet metal/found objects with minimal electronic equipment. Theme centred around the gay leather scene. This is BLJ’s first European tour.

Power electronics pioneer. Con-Dom stands for Control-Domination, and is the one-man industrial noise band of Mike Dando. Con-Dom explores any kind of social tensions and control: political, religious, racial, with an acid, violent and uncompromising attitude. He is well-known in the industrial scene for his furious ravaging vocals and the devastating live performances.

BRUT has a smell. A body. A vagina. A mind. BRUT has a picture. A reflection. An interface. BRUT is strong and angry. BRUT is restless and manic. BRUT is political. Feministic. BRUT has a voice. It consumes and pukes out. BRUT is alcohol poisoning. A prescription drug. BRUT! Neither in or out. BRUT bleeds and shits and pisses. BRUT is outraged. It hates! BRUT is YOU as much as it is ME. BRUT does not vote, pay taxes or interact. BRUT breathes. Despises stupidity. BRUT is never satisfied. BRUT is hungry! BRUT is an entity I will give you. So you can see what BRUT wants you to see. BRUT does not believe in war or in peace.

BRUT IS A WOMAN – WOMAN IS A WEAPON!

Svartvit is a Dutch project that breaches the gap between harsh noise sound experimentation and performance art. The result is a very personal and emotional presentation of a troubled mind, overtaking and often physical. Part of the full Black Leather Jesus tour. Harsh noise violence.

Purging Light is quite a new name in the scene that I’m very enthusiastic about. This duo presents a straight forward mixture of power electronics and harsh noise. Members are currently residing in Anrhem and Berlin.

Zyrtax is the industrial noise project of Johnny van de Koolwijk, who also runs Dead Mind Records. In the past Zyrtax has collaborated with some well known projects like Goverment Alpha and Contagious Orgasm.

Tickets are 7 euros, they will be available at the doors or can be bought in pre-sale at www.thetideoftheend.com