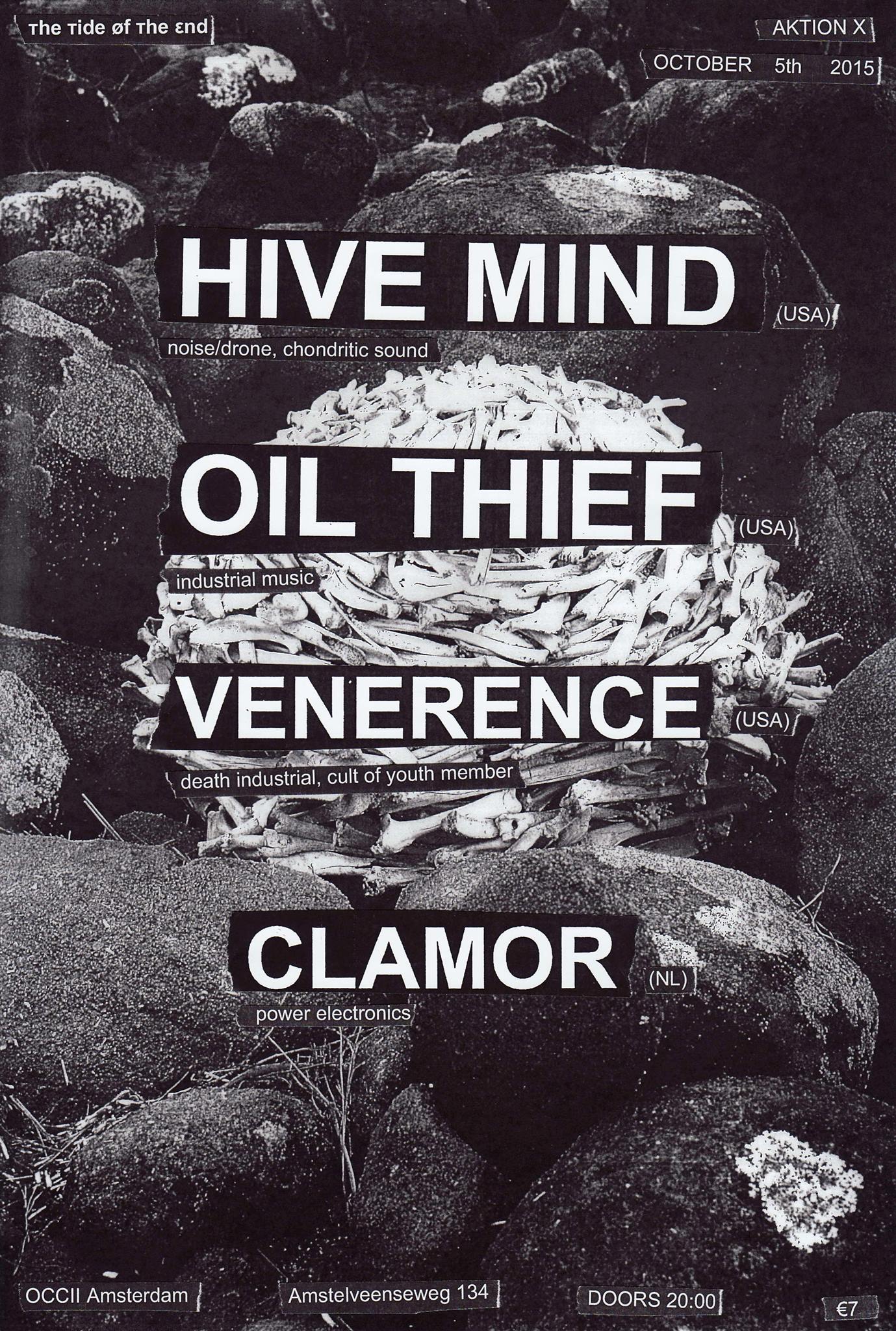 The tenth [ттøтε] AKTION will showcase a diverse selection of industrial music, noise, and power electronics.

Whatever rise to the synthesizer came later on in the 00’s is hardly of any concern to Greh Holger (aka Black Sand Desert, Cleanse) and his Hive Mind project. Having released private press cassettes of solo synth works as far back as 2002, Hive Mind exists as enigmatic in world of new-jack synthheads and the tidal wave of “neo kosmische” that goes with it by flying far under it’s radar.

The brutality of the Earth and the harsh reality of all that it holds. Unknowable sounds – that of the dawn of the Earth, or perhaps the sound of its demise. A toxic swamp of chemicals and mutated organisms left behind long after man has wiped himself away for good. Field recordings from the end of the world.

While others are racing for the stars, Hive Mind’s tetonic plate shifting and brutal rumble will give you a brand new way to look at modern synthesizer composition.

Oil Thief is an immense alloy of noise, ambient, rhythmic electronics and industrial music melted down to one solid vision. Never flinching from change, Oil Thief moves seamlessly within, around and outside of genre to build a cohesive body of work. Oil Thief is anti-stasis ambient industrial built for the tropics, climes both inner and outer, relative to local humidity. Oil Thief mingles with change, colonization, union, dis-union and abstract formulae through analogue and digital synthesis in an attempt to arrange formal relations between the political, cosmic and personal. Oil Thief is Los Angeles-based, from Centennial Apt., by the palms on the hill. Kind of near Chinatown. Oil Thief is Lee Landey. Released one of the most captivating pieces of industrial music through Chondritic Sound this year.

Sean Ragon is mostly known for his main-project Cult of Youth who’ve been releasing through Sacred Bones for the past few years. His other entity Venerence is still covered in obscurity with a first tape coming out on Ascetic House last year. Through this project he channels diverse sounds of noise, death industrial and power electronics in ever so haunting ways. Gritty, compelling, ritualistic but most of all powerful.

A loud uproar, as from a crowd of people.

Tickets are 7 euros, they will be available at the doors. A combined ticket can be purchased for 12 euros that gives access to the previous event (Dave Phillips, Mei Zhiyong, Dagora, Deafault) on the 28th of September as well.