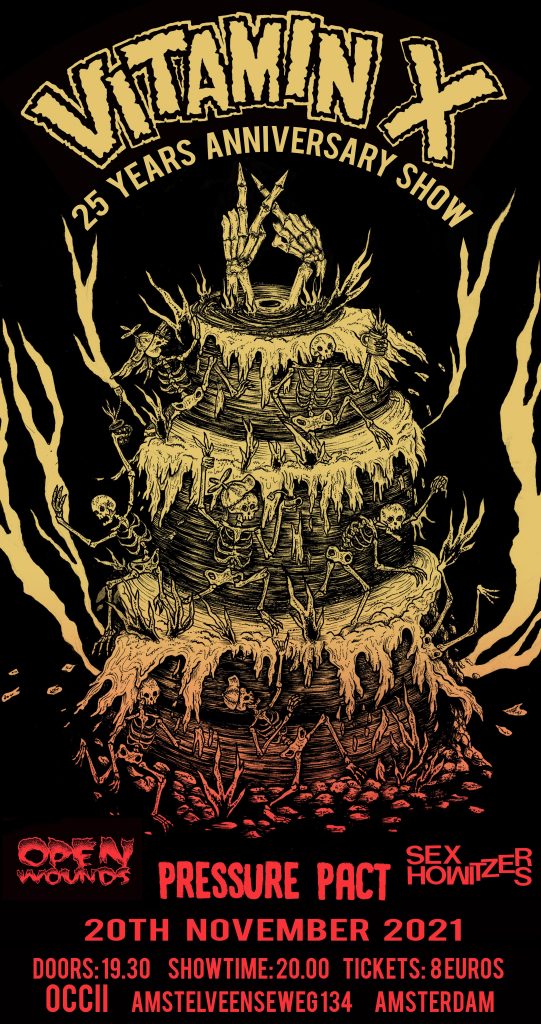 NOTE: THIS SHOW WILL BE POSTPONED TILL EARLY 2022 – WHEN WE HAVE A NEW DATE ONLINE TICKET SALE WILL BE OPEN AGAIN!

VITAMIN X is inviting you to celebrate their 25th birthday!!!!

This gig will take place according to the current guidelines for live music: you can only enter the venue with a qr code (obtainable if you are vaccinated twice or if you can show a negative pcr test result). The gig has be over before midnight, hence the fact we start early and we can assure you that is worth getting there early.
Line up:
VITAMIN X
(Amsterdam’s finest bulletproof hardcore punk thrash with some rock hooks)
https://vitaminx.bandcamp.com/
PRESSURE PACT
(killer 80’s style Boston hardcore punk from Tilburg,NL)
https://pressurepact.bandcamp.com/…/scared-off-the-streets
OPEN WOUNDS
(catchy 80’s US style hardcore punk that smells like Article of Faith, taste like Zero Boys and kinda …looks a bit like Jerry’s Kids… from Amsterdam/NL)
https://openxwounds.bandcamp.com/
SEX HOWITZERS
(Y2T Hardcore thrash a-la Tear It up, WHN? and DS13 from Utrecht/NL)
https://sexhowitzers.bandcamp.com/releases

poster design:: Jeanne ‘Spit it Out!‘.
a limited silkscreen version of those posters (she did those prints for us) for sale at the show.

OPEN WOUNDS, PRESSURE PACT, SEX HOWITZERS, VITAMIN X
Bookings are closed for this event. 50 tickets will be sold at the door 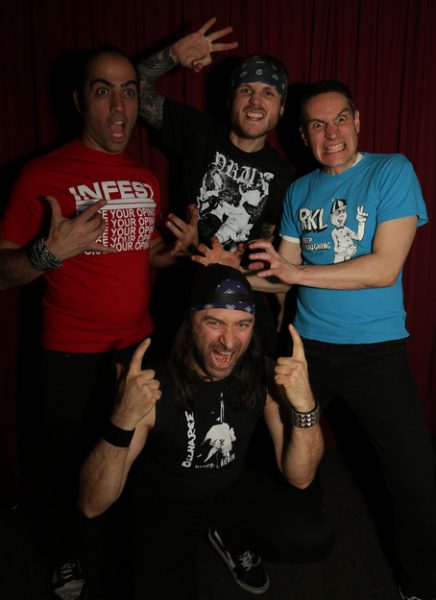 VITAMIN X from Amsterdam is one of the world’s leading and most popular hardcore punk thrash bands, releasing several classic albums, touring all over the world and playing all major hardcore punk metal fests with their unique mix of early 80’s hardcore punk, fast trash and wild 70’s rock riffs.

In 2008 they release the now legendary album ‘Full Scale Assault’ recorded in Chicago by Steve Albini (Nirvana, Iggy Pop & Stooges, Pixies, Neurosis, Led Zeppelins Plant & Page) on Tankcrimes Records (Municipal Waste, Toxic Holocaust, Fucked Up). The album got voted best record of the year by many punk and metal zines. Art is by high profile artist and long time fan Baroness’ John Baizley (Metallica, Kylesa, Baroness). 2012 follow-up ‘About To Crack’ is also recorded by Steve Albini and art by Baizley. Both albums got rave reviews. Many of their songs are covered by bands all over the world.

VITAMIN X is featured in all known punk hardcore metal zines, from Thrasher Magazine to Decibel to MRR, and did many radio and tv performances, incl 8 live songs for MTV Brazil.