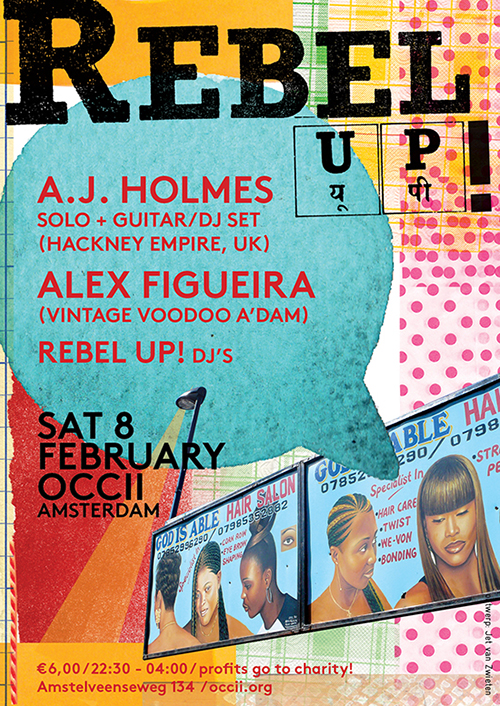 Another Rebel Up! Soundclash night coming up with a sweet line up of special guests.

East London musician A.J.Holmes is the founding member & singer of A.J. Holmes & The Hackney Empire band, who play a marriage of afro-pop and soukous paired with traditional pop sensibilities as a serious warm vibe. A.J. learned to play African *palm wine* guitar music from Sierra Leonese legend S.E. Rogie (thé king of palm wine guitar music) and from that moment on he got totally sucked into African music which also resulted into co-organising the succesfull Secousse nights in London together with global electronic duo Radioclit. On this night he will play a solo palm wine guitar set as warmup, followed by a super special set with guitar & dj decks at the same time for a unique approach of his mixed African sound. We can only say; not to be missed! Listen to his mixtape & songs of what to expect. 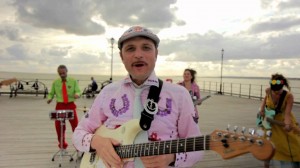 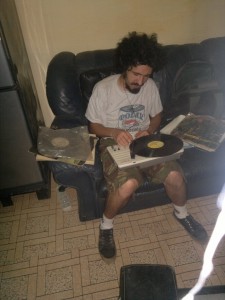 dj Alex Figueira, born in Venezuala with Brazilian roots, has a BIG passion  for vinyl; he is the co owner of the fine Vintage Voudou vinyl shop in A’dam, a grand collector of vintage African and Latin vinyls, runs the Music With Soul label and even finds time to play in the bands Fumaça Preta & Conjunto Papa Upa. This passionate spinning man will sure make you bounce & swing with his special delicious selections from the tropics. and oh, it’s his birthday party!!!
https://soundcloud.com/music-with-soul

Support as ever by your interlocal Rebel Up! Soundclash dj’s with all kinda fruity & spicy global dance tunes.
http://www.mixcloud.com/Rebel_Uppa/

6€ in, profits go to charity!
Brazilian NGO Tiaozinho > a sports project for children and adolescents in one of the Sao Paulo favela’s
http://www.tiaozinho.org.br/