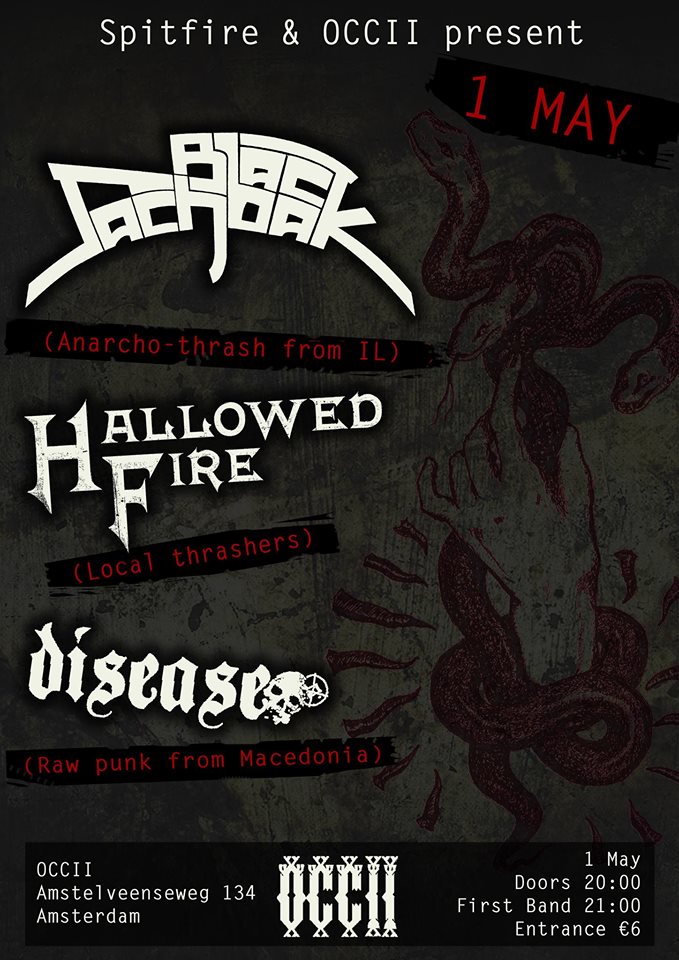 We will be cooking up a night of old school thrash metal madness at the OCCII!

BLACK SACHBAK (IL)
Headlining the night is Black Sachbak, an anti-capitalist themed thrasher outfit from Petah Tikvah in Israel. They are celebrating the release of their new album “Black Sachbak vs the Future” under Combat/EMP Records (Megadeth, Circle Jerks, Nuclear Assault, etc). They are playing shows throughout Europe, but are starting off this leg of the tour in Amsterdam! Modern thrash with a punk background, led by a frontman with unmatched energy.

HALLOWED FIRE (NL)
This old school thrashmetal five-piece revived the lightning-fast speedmetal gusto from the 80s and brings it with a vengeance. They released their debut album “Decade of Darkness” last year and are quickly making a name for themselves in the scene. Expect tight riffs and glorious guitarsolos that’ll make you want to tear shit up!

DISEASE (MK)
Hailing from Macedonia, this D-beat group has released music all over the globe, and is now going on a monumental 3 month European tour. Raw and energetic, and heavily influenced by Japanese and Swedish punk bands such as Disclose.

BLACK SACHBAK, DISEASE, HALLOWED FIRE
NO PRESALE, TICKETS AT THE DOOR, CAPACITY 250, CASH ONLY AT VENUE
Posted in HC/PUNK!