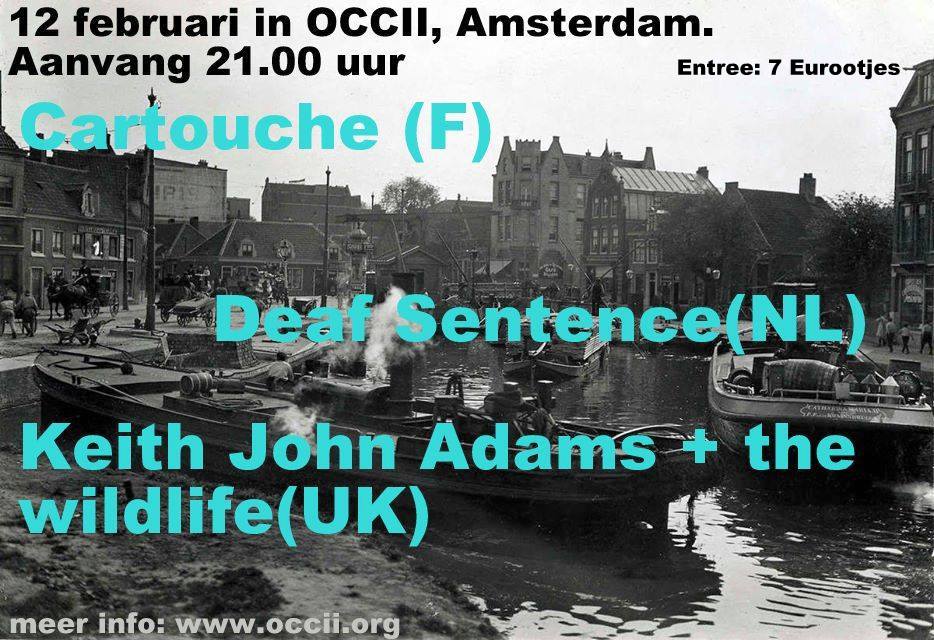 Pieces of life, songs of resistance, mostly interpreted in French by a female voice, the French band Cartouche disseminate since few years, his positive rage in France, Germany, Poland, Serbia, Hungary, Belgium, in clubs, squats, jugendzentrums, etc, sharing with the audience the emotion and fury given by Song of partisan from ghetto of Vilnius (in Yiddish), the verses full of desperation and fighting spirit from Marianne Cohn and all the others words and chords from the band.
After a first opus, with punk intonations from the eighties (Blondie, Clash, etc), for the second album “A corps perdu”, Lucas Chauvières from the studio Soyouz (Paris) to the eleven songs of the album.
In june 2014, the third album, “Bread & Roses” came out, recorded at the Studioscope in Angers, by Cali. The 10 days spent with him and his work, made the sound to developp.
The melodies are sometimes more melancholicand some others, more angry.
The murder of animals, the exil,the time which goes on and the friendship which never end up, the violences against women and exploitation of their body and their work; 9 years after, the band Cartouche is still inhabited by the desire to share music and convictions.
http://www.cartouche.lautre.net/dates/

KEITH JOHN ADAMS AND THE WILDLIFE (uk) Expect a boisterous show of oddball garage rock, classic songwriting and infectious pop from KJA’s new trio, with Matt Armstrong on double bass (Bill Fay band, Kenny Process Team) and Mark Braby on stand-up drums (Subway Sect). Fans of Jonathan Richman, Violent Femmes and The Kinks will not leave disappointed. The new album, Roughhousing, is a fun, chaotic record with tracks that have already been played by a host of 6 music DJs. “Good wholesome fun from start to finish. This is honest, open and catchy music” WHISPERIN AND HOLLERIN’ “Great non-programatic pop” THE WIRE “A slightly punkish but very pop poet, whose instantly appealing songs fair crackle with positivity” THE LIST. Music In My Feet: http://www.youtube.com/watch?v=2pr7jIOHov0 Lullaby’s Answer: http://www.youtube.com/watch?v=9XnCVrUnnx8