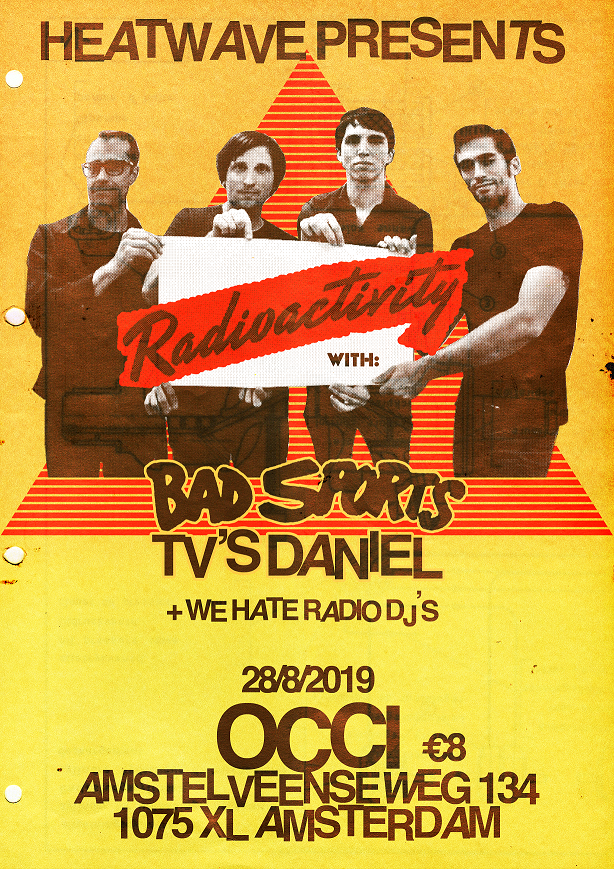 Radioactivity
Radioactivity is a continuation of The Novice, Jeff Burke’s band while living in Japan. Jeff has since moved back to Texas, and out of respect to the Japanese lineup of the band, has changed the name to Radioactivity. Jeff is one of the most distinctive songwriters in the punk rock underground, and his songs will sound instantly familiar to any fans of The Marked Men or Potential Johns. Band members include Jeff Burke, Mark Ryan, and Gregory Rutherford, whose credits read like an all-star lineup of Texas punk and garage rock royalty, including members of The Marked Men, Mind Spiders, Bad Sports, Wax Museums, The Reds, VIDEO, and The Novice.

Bad Sports
Bad Sports are Texas boys Orville Neeley, Daniel Fried and Gregory Rutherford, and they been playing in the scene under Bad Sports since 2007. Heatwave has been fan number one of this punk rock trio since the very beginning and we are really excited to have them down in Amsterdam again!

Who the fuck is TV’s Daniel?
It would be hard to chronicle the North Texas punk scene without the mention of its prolific son. Over the years, Daniel Fried, has been involved with some of the most notable bands in Texas since the new millennium. Hailing from Denton, TX and adopting the moniker TV’s Daniel, he is a principle songwriter in Bad Sports, The Wax Museums, VIDEO, and Silver Shampoo.

BAD SPORTS, DJ We Hate Radio, RADIOACTIVITY, TV'S DANIEL
Bookings are closed for this event. No tickets will be sold at the door
Posted in HEATWAVE