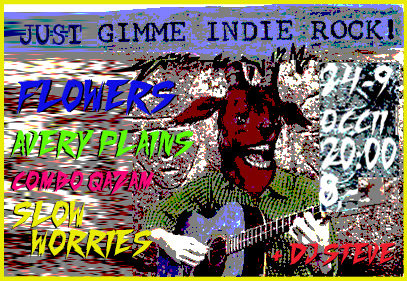 “Crisp, deftly performed indie rock that leans heavily on ’90s sonic motifs, in the shadows of TEAM DRESCH, SLEATER-KINNEY, LIZ PHAIR, the BREEDERS, or SHUDDER TO THINK. If you told me this was a lost classic from that era, I’d be inclined to believe you. The recording,
musicianship, and especially the singing is completely on-point. I admit to being slightly thrown off by how American the band sounds, despite being from Holland; I don’t just mean the singer’s accent (I have lived in Amsterdam and know that many Dutch speak impeccable English), but even lyrical references. If anything, this album is a little more polished than the usual MRR fare, but recommended for fans of the aforementioned groups nonetheless.”
– MAXIMUMROCKANDROLL
https://www.instagram.com/slowworries/

Fluorescent, doom-laden, gloomy, forlorn minimalism. FLOWERS is part of the Luik Music and Meduse MagiQ families.
“Sounds like the opposite of a beautiful Monet landscape and the perfect soundtrack for a no-deal Brexit”
– The Quietus
https://www.instagram.com/Flowersmusicofficial/

Avery Plains is and Indie Pop/Noise band from Groningen. Energetic melancholic songs, releasing a melodic, noisy, intimate wall of sound.
“the music of Avery Plains certainly matches that post-grunge alt-rock-explosion sound, but they do it really, really well! I’m as surprised as you, but they really do nail it, that sense of post-shoegaze, post-grunge, didn’t-quite-make-it major-label rock groups that turned into cult favorites years after the fact.” – Yellowgreenred.com
https://averyplains.bandcamp.com

You hear dichotomy throughout the music of Combo Qazam. The band can sound mechanical yet humane at the same time. Prog-like perfection goes hand in hand with Pavementesque dissonance. Aloof lyrics are being sung with heavenly harmonies. Scraping guitars and goofy samples are being recorded on 4-track cassette and in Logic Pro. The beat is leading you through eerie melodies, with hints at postpunk, mathrock, kraut and noise.
https://www.instagram.com/combo_qazam/

AVERY PLAINS, COMBO QAZAM, DJ STEVE, FLOWERS, SLOW WORRIES
Bookings are closed for this event. 50 tickets will be sold at the door