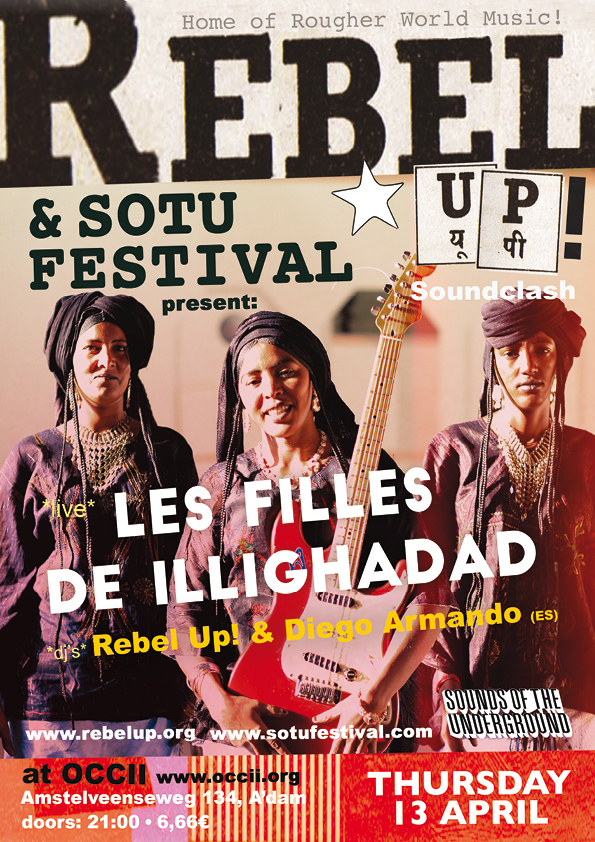 Fatou Seidi Ghali, Alamnou Akrouni and Mariama Salah Aswan come from the region of Illighadad, in the heartland of the Niger bush. Rarely have we heard sounds that resonate with as much emotion as those of Les Filles d’Illighadad. Fatou Seidi Ghali directs the band on guitar and vocals with her measured and calm play. In a world dominated by the masculine gender, she is one of the only female guitarists of Tuareg music. Together with her cousins ​​Alamnou and Mariame on vocals, they go right into the essence of the “ishumars” music, mixing it on stage with the tradition of “Tende”, recording their pieces in the large open studio of the desert. Its music is minimalist, poetic and feminine where the trance and ancestral rhythms of the “Tendes” come to support a throbbing and melodious blues. Love, religion, the difficulties of life, the joy of the community, the glorification of nature and the Tuareg culture are themes distilled from the grains of their songs.

Xavier Riembau aka Diego Armando is a DJ from Barcelona who plays an eclectic mix of groovy tunes from around the world.
A 24-h digger who knows his way around from Jamaica to Cuba to New Orleans music. His specialty is dance floor killers from Afro-American music, exotic tunes from Brazil to Africa, disco and acid house anthems. He has played in festivals like Sónar, Piknic Electronik, Faraday, Black Music Festival, and venues like Razzmatazz, Apolo, Marula, Lolita, Powder Room, La 2 de Nitsa in Barcelona and Bonnefooi in Brussels. He has also opened for The Streets, Ike Turner, Mdou Moctar, King Aysoba, The Ex, Fendika, Mammane Sani or Maceo Parker.
He is a visceral DJ playing records for more than 20 years, especially active in Barcelona. His name is a hommage to the best football player in the planet, aka Diego Armando aka the Hand of God. Mani, bass player from the Stone Roses and Primal Scream, gave him his moniker name after a big party in La Costa Brava.

Rebel Up! has been around for 10 years now. Having started out in OCCII in 2007 as small NGO fundraiser parties, Rebel Up! steadily evolved into connoisseurs of folk, urban ‘world’ music and alternative global culture and promoting these new sounds where possible, from Amsterdam to Brussels. Numerous party nights, concerts, festival performances and curated night have passed by, amounting to what must be +100 events. Since then, Rebel Up! has done a music project in India, toured Canada, Brazil, Argentina, Peru, Russia and most of Europe. This year will also mark the birth of Rebel Up! Records, a vinyl & digital label for special global sounds. Select global, play local!

SOTU (Sounds of the Underground) is an annual alternative music festival in Amsterdam. SOTU has a passion for genre bending sound and performances – you can listen to noise, punk, folk, improv, rave, avant-garde and electronics.