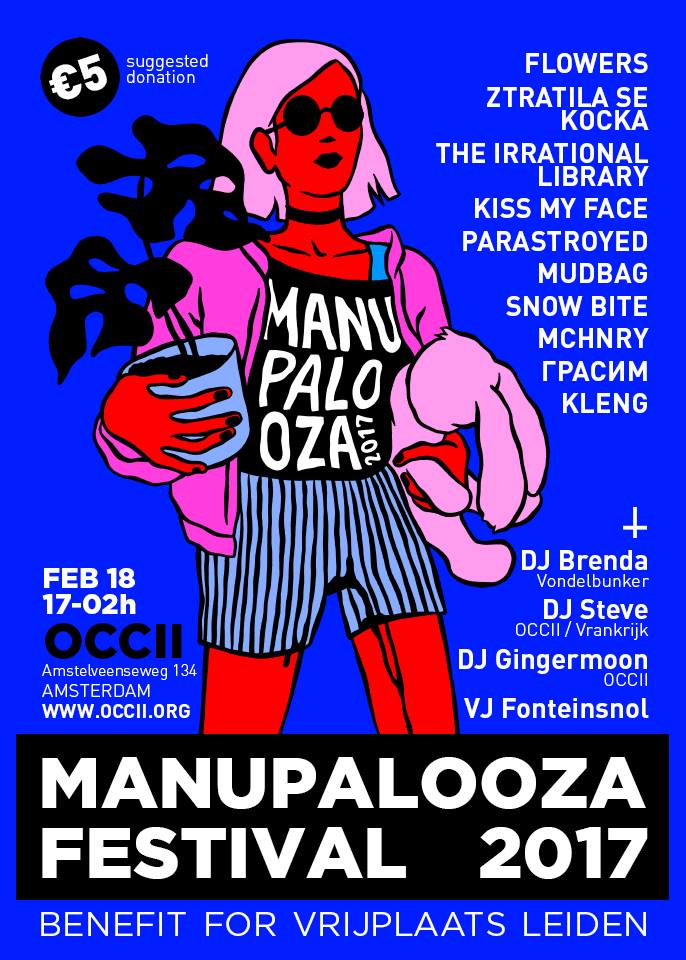 MANUPALOOZA FESTIVAL 2017 is coming!!! With (as is Tradition): Brand New Bands, First-timers, One-offs, Solo & Side Projects!

All proceeds of this evening will go towards supporting the making of a new LOUD MUSIC venue in Leiden, the town Manu started operating in. #givingbacktothecommunity

“Once upon a time, I did not know what a backline was. I did not realize a drumkit had several parts, or that a guitar amp needed a top as well as a speaker. I wondered why you need a P.A., don’t you just sing inside the mike? ….Thanks to the people in LEIDEN, I now organize events around the world!”

BAND ANNOUNCEMENT: Kiss My Face!!!! I am super honored to be announcing the 10th and last live band/act of the night. “We slipped through a gap in the fence and stepped into the shell of a derelict townhouse. Broken tiles, splintered wood and plaster dust rained down around us. We stood our ground, raised our faces to the sky and yelled “Hi, I’d like to add you to my professional network on LinkedIn.” KISS MY FACE – poppy – “Because the world is fucked now and we all deserve to forget that and escape to a happier place every once in a while” – by Kelly Chambers , Maaike Muntinga , and a mysterious Ben . 17:30 SHARP – (Doors 17:00)
1 HOUR ADDED!!! we have been flooded with #Hartvoordezaal love, and Manu is now adding 2 extra names to the bill, all good people that are linked to LEIDEN in special ways: Joshua Baumgarten ‘s The Irrational Library band !!! ZTRATILA SE KOCKA !!!! Yup, words, music, THOUGHT. —— and we haven’t even finished telling you all about the Already Confirmed acts which are hiding awayyyyyyyy —- FINAL PROGRAM WILL BE ONLINE A.S.A.P.
NEW DJ: Gingermoon ! our very own OCCII volunteer and artist Charlotte Caldwell is scheduled between the bands mid evening…yup, that time when memories start getting fuzzy, what with 4 bands down and 4(5?6?) more to go….
SNOW BITE!!!! -ANOTHER NEW BAND debuting at the festival. New duo of Kire from Black Wednesdays and Nadia van Osnabrugge from Rêverie. Doomy, heavy, angst giving. Let is snow, let it bite – see you in the pit!!!
NEW BAND! DEBUT SHOW! Flowers from Amsterdam is the super-baby project of Juju Be & Roos Pollmann , alternative rock coming right out of our Krakende Notenpret collective. We have been eavesdropping them too, and it’s gonna rock!!!! ***Sneak preview***
NEW LIVE NAME!! Герасим – A sonic rigmarole exploring themes of narratology, polyphony, performing motions, plagiarism as praxis and the prostethic origin of langue.
NEW NAME! Remy de Kok & Semuel Leonardo Leijten have started a breakbeat/electronica duo, Kleng . They will debut at the festival later in the night, super excited about this one!
NEW NAME 2: DJ Steve, yup, from your fave quirky OCCII / punx Vrankrijk nights! Steve has an immense collection of grrrreat music, mostly grrrrl-fronted but not always. Manu often wonders what his house must look like, records everywhere. He will be OPENING the fest at 18:00 and spinning in between those first 3 “OMG-it’s-my-first-show” acts – can’t reveal those yet
NEW NAMES! 1. Mudbag : nobody knows much about this side project of Derek Liggett ‘s, an old faithful playing at every Manupalooza fest to date, often reuniting bands for it. Time to change this! Derek has always supported Leiden and its d.i.y. scene, and all its pre- Vrijplaats Leiden venues (r.i.p. Koppenhinksteeg). We’re all curious to hear this one new band whose noise often spills into the kitchen, on wednesdays when we’re cooking with Guerilla Kitchen Amsterdam ….!
DJ BRENDA! our first DJ name….famous already thanks to Vondelbunker and the best office parties. Music? “ALL your guilty pleasures from the 90s”. She will spin after the bands, for all you dafties that need to get drunk first before getting loose. More TBC! But yeahhhh – shh, it’s Brenda’s birthday that night so Expect Balloons.
Mchnry is the art/music project of my friend Levi van Huygevoort , who has a very special bond with Leiden ’cause he once live action painted for SUB071 , the venue that is now dead but whose people are investing LOTS in the new Vrijplaats Leiden – what goes around comes around!
Let’s announce the first 2 names! MORE COMING – some people are starting bands especially for this, so….l! Parastroyed : when Eline Korff de Gidts from † Lifeless Past † started recording her own music, she realized she had enough for an album. So she decided to invite some people to play live with her. They’re working very hard right now to debut at this festival!

eks designed us a poster
https://www.facebook.com/eks.graphics/