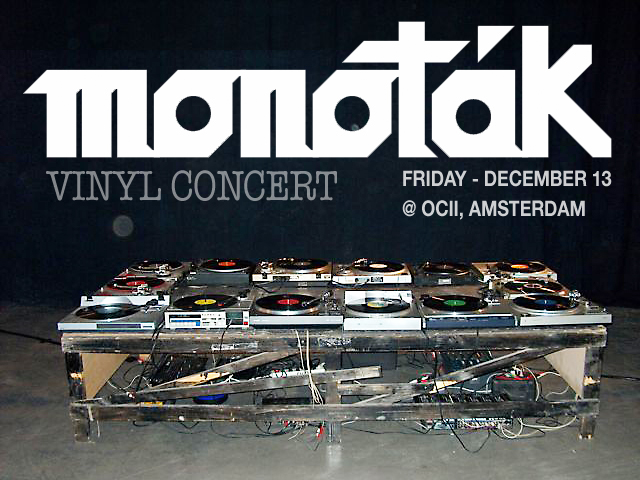 The composers collective Monoták presents itself this year with a concert series in various special venues in Amsterdam. On 13 December compositions making use of up to 10 turntables and various acoustic instruments will be performed at Occii.

7090 (formerly known as Trio 7090) gets their inspiration from new music, aleatoric and improvised performances and older music. In 2007 they recorded and produced the widely acclaimed cd “Béton Armé”, with chamber music by Iannis Xenakis. The trio regularly works with other musicians, composers, visual artists and sound designers. This exciting way of programming resulted in establishing their own series of concerts, SNEAK 7090, in the Bethaniënklooster in Amsterdam. In 2010-2011 the trio works with composer / performer Michael Finnissy, wind player Michael Moore and the composers / improvisors of Field of Ears. Together with the Orgelpark Amsterdam, Trio 7090 organises the Xenakis Festival, to commemorate the death 10 years ago of this composer / architect.