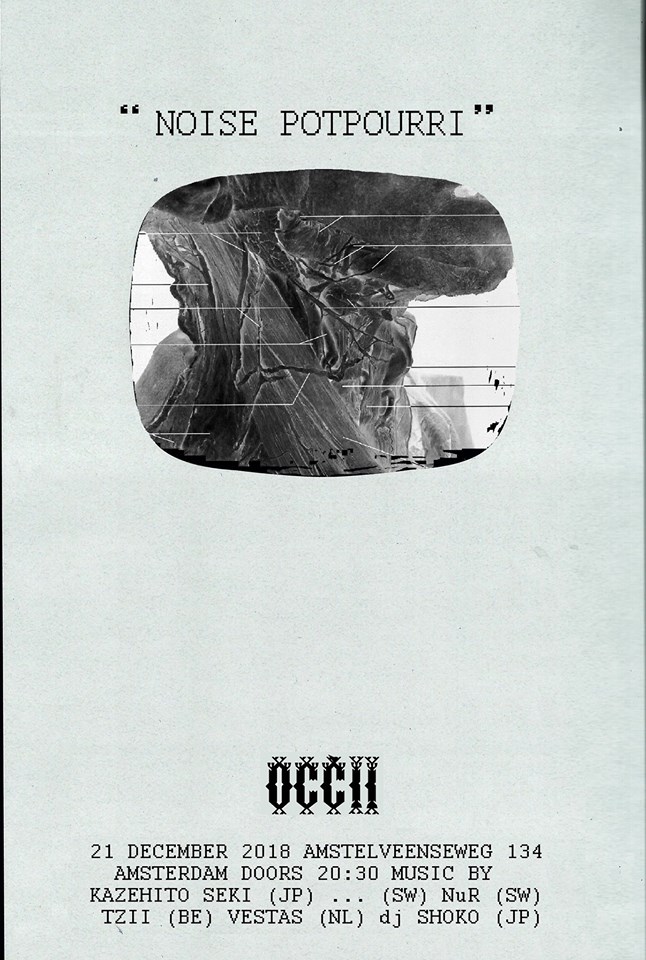 Kazehito Seki
is an amplified voice artist. From Tokyo. Voiz set is played just with 1 or 2 microphone/s with NO electronic FX. Working on the sound produced from the vocal organ in broader and more concrete sense, relativises the existing interpretation of the “voice” (such as singing, talking, etc). The wide spectrum flickers in subtle ambience, intense silence and brutal harsh noise in a microsecond.
Self Toxication is another project that abstracts the “voice” forming into the sound deeper. The toxin over amplified in stereo channels feedbacking between soundsystem and the physicality (as the hardcore), cuts up himself messing up at the top speed of harsh noise.

https://soundcloud.com/unkodaisuki
——————————————————————————————-
. . . :
Since his twenties, the being behind the soundless moniker . . . (as known as Nikola H. Mounoud) process in real time; analog, digital and hybrid feedbacks in order to produce unique, powerful and highly dynamic live performances where irresponsible noise, unexpected dense sonic blasts, total non-sense and deep irrationality meets allowing the audience to absorb the unleashed raw beauty of the frequencies wrath. For more details, here is a good start > http://ooo.meovco.com

some sounds : soundcloud.com/nikolamounoud or http://dotdotdot3.bandcamp.com/releases or on archive.org
many videos are available on youtube and vimeo.
Profile pictures : https://drive.google.com/drive/folders/0B6PcBtTnLK1RcFlVN2hST3RFZGc?usp=sharing
——————————————————————————————-

Traffucked field recordings. Severely screwed and always delayed recordings due to high levels of compression. a set for the last ones and the retarded.

Tzii
Since the 90’s Tzii, music composer and filmmaker, spreads his frequencies all over the world through touring from Eastern and Western Europe to Australia, passing by USA, South-East Asia, Canada, Japan, Indonesia and Africa, where he played hundreds of shows..… “A mountain of multiple figures” as defined by Nyx … His main aim is to reach transcendance through sound trance, layering and looping to another dimension …… To do so he explores infinite different worlds and expressions, from music to performance or collective creations. One thing always remains in his works : they’re impossible to fit in any box. He’s part of several other projects like SOLAR SKELETONS, MS30, 1997EV, VIRIL, AEROBICONOISE and works also for dance companies, living performances, movie soundtracks and any other mediums with sound inside ….. He collaborated on stage or in studio with numerous other fellow musicians around the world and is currently engaged in a never ending world tour …..

Vestas
Frank Vis is a Amsterdam based, Noise Artist, Label owner and Performer, known for unpredictible set ups, uncountable numbers of collaborations and a high vary of sound shapes, ranging for quiet and subtle soundscapes to harshest noise walls.”Vestas” is his newest soloproject and based around acceleration, controled by partly a modular system.

Dj Shoko (Green Tribe)
Hello, we are the “Green Tribe”.
A mixed group of creative people of different ages by their together found common beliefs and ideals.