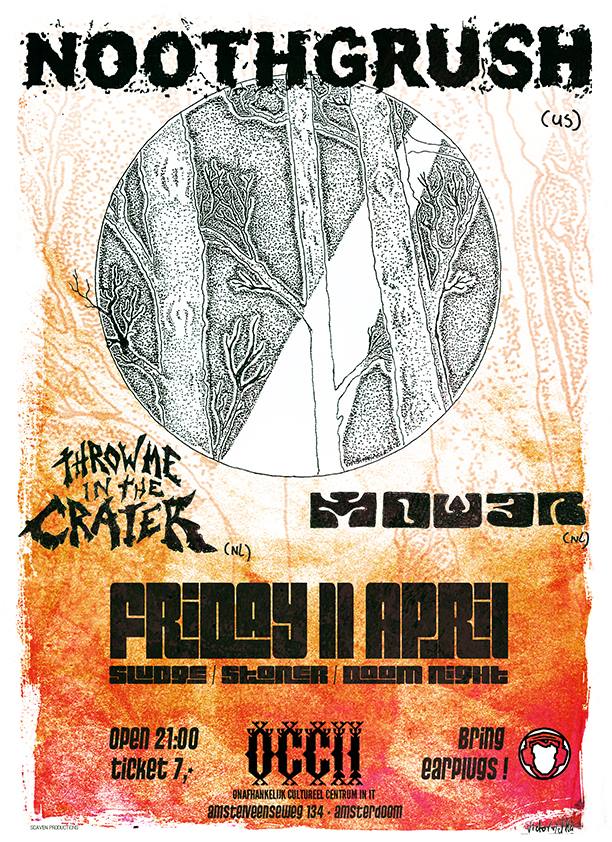 In 1994 Gary and Chiyo decided to start a band that played slow, heavy, riff-based music. They were soon joined by Tom Choi and Luis DaVilla. Their slow tempos and sound was punctuated by a severe low-end attack when Gary and Luis both played bass on many songs. Turned out Tom and Luis had different ideas on direction and just several months into the project and directly after recording the songs they had written together, both of them departed.

Russ joined, new songs were being written and the band began playing out. Chiyo’s friend Chris Dodge soon offered to put out a 7″. This created a buzz and offers started coming in to do splits culminating with the ultimate honor of doing a split 12″ and CD with Corrupted. Matt Harvey played guitar and sang on many songs that ended up on 7″s and we played some great shows with him such as our first Slap a Ham’s Fiesta Grande festival. Then Matt departed and Gary played 2nd guitar for awhile and Al Ruel took over in the bass department. Al also left the band after a year and Gary took over the bass duties once again. The 90’s were filled with writing, recording, endless shows and doing a few tours along the way with others like Seized, Corrupted and Wisigoth.

Creativity was waning and it appeared that local interest in the band was as well. They needed a break but could not see it and the band drifted apart in Summer of 2001. Over those years there was a bit of activity, mostly when Throne Records did the first official release of Erode The Person in 2006. Then in 2011 Parasitic, Southern Lord, Fuck Yoga and Emetic Records all agreed to do releases. The band decided that it would be a good thing to help support these releases and played three shows in Summer of 2011, their first in ten years, two of which were with Winter for Southern Lord’s Power Of The Riff Festival.

Noothgrush is currently working on new material to record in late March of 2013 to be released by summer’s end. We will only be playing a select number of shows in 2013 so we hope to see you there. Thanks for your continued support.

THROW ME IN THE CRATER

Mower starts with Joeri and Victor jamming on christmas eve 2011. It would take a while before more would be happening, also because they both allready played together in hardcore punkband O.D. Kids.

in 2012 Mark (Abaco)was asked to playe the drums, and a bassplayer was needed to complete the picture.
At the Obsessed show 12 september in effenaar, Eindhoven, we asked our friend Milo (former 13eaver) to play bass. The name was not there yet.

It took a while before we actually went to practice for the first time, but when the famous Snakehouse (a squat in Amsterdam, also where Mark and Joeri live, with deep roots in stoner history) would be celebrating there 30th birthday and a 3 day art-festival would be held, it would be the perfect place for a first show. And so it was to be….
http://www.m0w3r.com/

MOWER, NOOTHGRUSH, THROW ME IN THE CRATER
Posted in HC/PUNK!