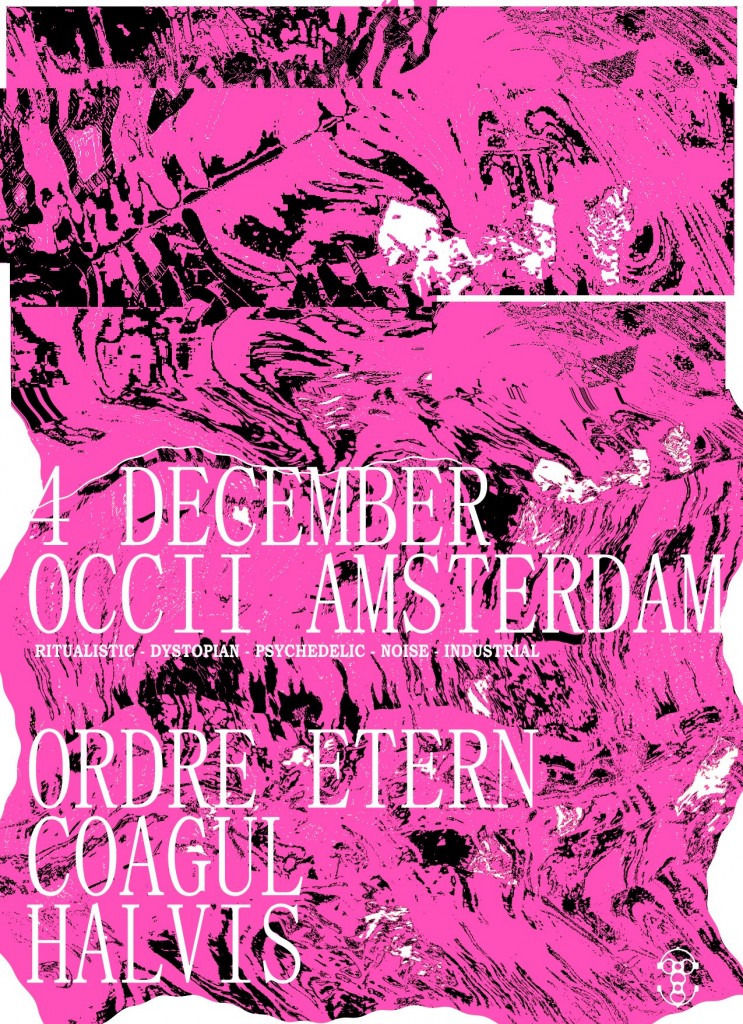 ♒♒ORDRE ETERN
Ordre Etern is formed by the members of ex psychedelic noise band Qa’a, Víctor Hurtado and Yarei Molina, and Gnod members Chris Haslam and Paddy Shine. Hurtado also has projects and has collaborated with artists such as Jochen Arbeit (Einstürzende Neubauten) and Nurse With Wound under his solo moniker Huan.
In this project they modify drums and guitar to ressemble metallic percussions and debris and together with timpani and soviet synthesisers create a desolate mechanical nightmare. The music is guided by visceral vocals sung in Catalan and Spanish that portray dystopian themes and reflect on the duality of human nature. The band are presenting their first album which premiered at Sónar festival in Barcelona last June.

♒♒COAGUL
Coàgul is the musical moniker of visual artist Marc O’Callaghan. With synth, vocals and bells he creates minimalist industrial music which at the same time seems medieval, almost rural, with chants and proclamations of lyrics from dark esoteric poems in Catalan. With an aesthetic between black metal and David Tibet, his themes are plagued with ancestral Mediterranean symbology, references to Tarot, surrealism and old secrets, and through all this he still manages to sound punk.
His live shows are ritualistic and primal combined with animations of his visual artworks. Coàgul is presenting his first vinyl LP “La Roda de la Justícia”.

♒♒HALVIS
HALVIS is an experimental noise/psychodelic/lounge outfit based in Amsterdam. With distorted feedback accompanied by keyboards, guitar pedals and bassy vocals the two-piece concocts a barely comprehensible soundscape of fragments, blasts, subtility and more or less controlled chaos. Taking their cues from diverse musical damaged goods hailing from lounge music all the way through to harsh experimental noise HALVIS creates a truly furious and highly inventive symphonic noise. Bandmembers: Frank Vis on Vocals and Keys, H.A. van Hees on Feedback.

SOTU (Sounds of the Underground) is a music festival and cultural
foundation organising events centering on and celebrating some unique
aspect of the global independent music and art community and its diy and
counter cultural traditions. The festival takes place in Amsterdam (the
Netherlands, since 2012) and Lithuania (since 2014), yearly around April
and September.

SOTU´s passion for genre bending sound and performances is at the heart
of all their events – you can listen to noise, prog, folk, avant jazz,
hardcore, electronica and bass.