“A 21st century take on Thailand’s indigenous Molam style, pairing lute and Asian harmonica with a beefed up rhythm section.”

The Paradise Bangkok Molam International Band are set to release their debut album ‘21st Century Molam’ on 1st December. Born out of the legendary Paradise Bangkok sessions run by DJs Maft Sai and Chris Menist in Thailand, the band play vintage molam music from Isan, in the North-East of Thailand, with a 21st century twist.

Featuring Kammao Perdtanon on phin (Thai lute), Sawai Kaewsombat on khaen, a type of bamboo harmonica, and backed by Piyanart Jotikasthira on bass, Phusana Treeburut on drums and Chris Menist on percussion the band have just completed a successful 2nd tour of Europe, which included a support slot for Damon Albarn in Berlin, as well as gigs in Germany, France, Switzerland, Belgium and the Czech Republic. Both tours, the first of which in 2013 saw them stepping in at short notice for Solange Knowles at Off Festival in Poland, took place before any recording had taken place, so there is a serious buzz of anticipation for this debut.

The album was recorded in Bangkok and mixed with Nick Manasseh in London, who also contributed a masterful dub to the band’s debut single ‘Roob Lor Pu Tai’ (included on the CD version). The single flew off the shelves when it was released over the summer. 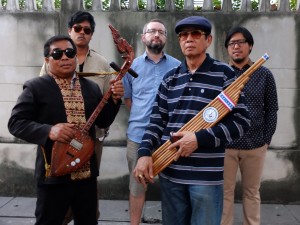 Whilst based on the traditional molam sounds of Isan, the band also draw out the trance-like qualities of the music be it the repeated motifs of ‘Sao Sa Kit Mae’ lead by Sawai’s ethereal khaen, or the driving grooves of ‘Lam San Disco’ where Kammao’s psyched out phin comes to the fore. Rooted in tradition yet with an eye to the future, The Paradise Bangkok Molam International Band have already made waves on the live stage, and their first studio recording very much continues in the same vein.

Chris Menist and Maft Sai are also behind the highly acclaimed ‘The Sound of Siam’ compilations on Soundway Records, as well as releases for Finders Keepers, Light In The Attic and their own Paradise Bangkok label.