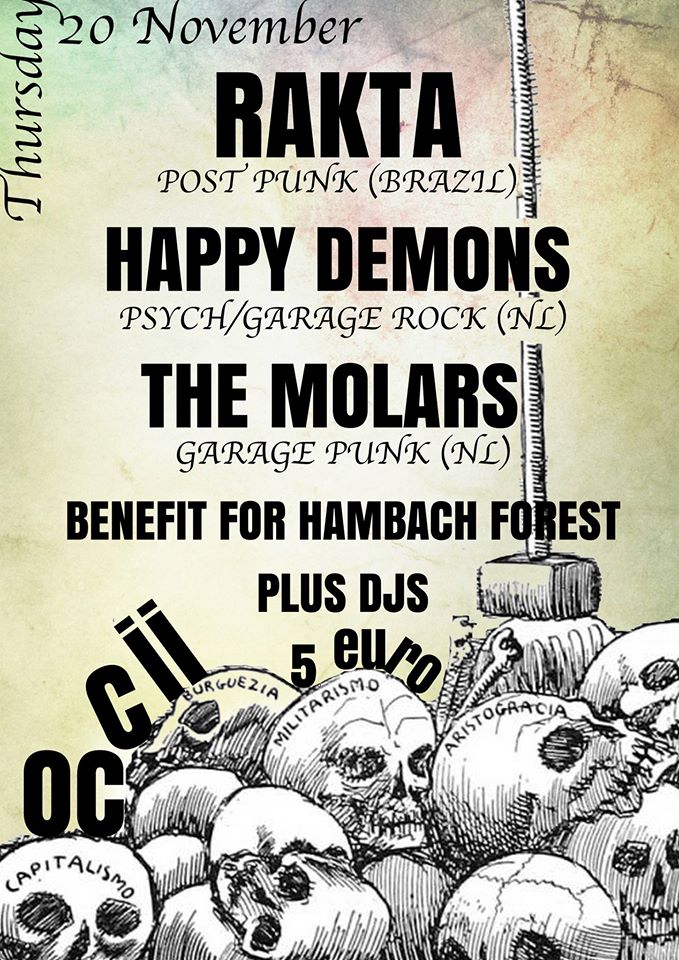 RAKTA is formed by 4 crazy women that are preparing themselves for a half of the world tour about to begin on October 6th. They hail from São Paulo, Brazil, a disturbing metropolis filled with poverty and misery but punk and chaos as well.

Their influences may come from UK 80’s anarcho-punk adding lots of experimentation and wilderness. You can also hear echoes from Can, Crisis, Dead Can Dance, Cocteau Twins, Crass, Pink Floyd, Xmal Deutschland and others but these ladies can’t get tied to anything and there is where the mystery goes on.

Prepare yourself for a trip to an unknown universe.
http://rakta.bandcamp.com/

HAPPY DEMONS The one and only swamp rock band from Amsterdam. Psych/swamp/futurism/rock n roll!!
http://thehappydemons.bandcamp.com/releases

A benefit for Hambacher Forst campaign. The Hambach Forest is one of the oldest forest in middle europe, but already more than 4/5 of it is destroyed for open cast mining. The open cast mining in the Rheinland (between Colonge and Aachen) is the biggest climate killer in all Europe. The forest gets destroyed year by year, so that RWE the coal company (wich is the mother company of N-Power) can open cast the land. Also villages are getting destroyed for the open cast mining. All proceeds will go to Hambach Forest. For more information on the campaign and other ways you can help out please check out: http://hambacherforst.blogsport.de/