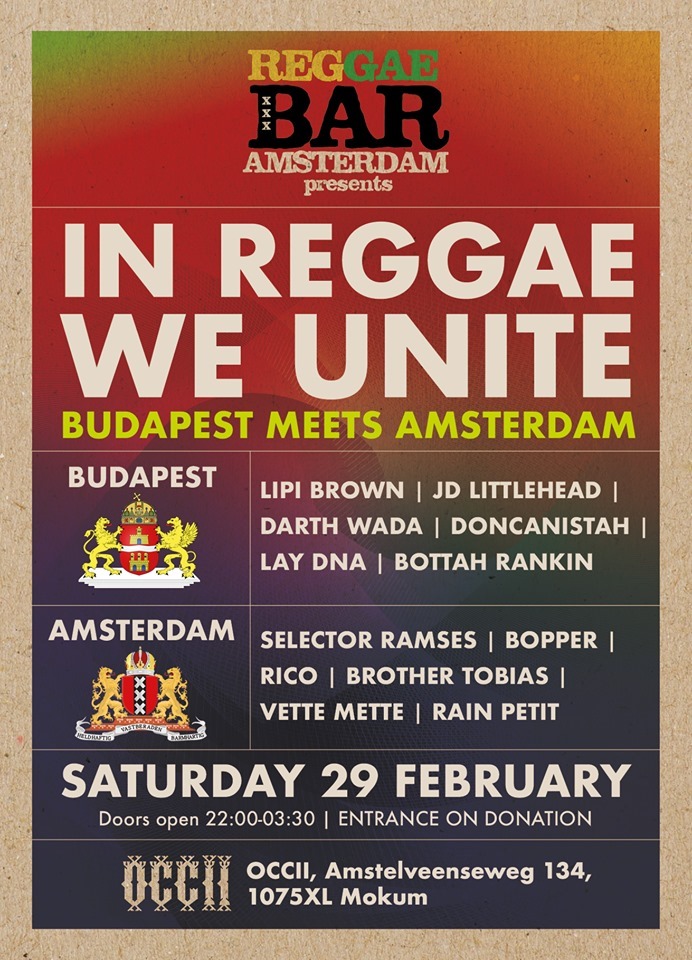 The cream of the crop of the Budapest Reggae scene will mix up with your Amsterdam locals for a night full of niceness!

Western Sound System. Consisting of Dart Wada and JD Littlehead raise all roofs with their mix of Ska, Reggae and Rocksteady!
JD Littlehead is also known to be singer of bands like ‘The Mighty Fishers’ and ‘The Yellow Spots’. Expect this seriously great
stageman to vocally lift their show even higher!

Doncanistah. One of the members of Engineers Sound and, just like all the other artists mentioned here, to be found on every
serious (Reggae) festival in Hungary and around. Known for playing broad selections of Roots and Rub-A-Dub from the early 80’s till now.

Bottah Rankin. The winner of the Hungarian Reggae singing/toasting contest in 2016. Singer of his self founded live band ‘Jah Golden Band’
and often siding with previously mentioned Engineers Sound. Coming to spice up this evening with his conscious, yet enigmatic lyrics!

LAY DNA. This lady needs hardly any introdcution to the Amsterdam Reggae scene. With her unorthodox selection and mixing technique
she moves all dancefloors with her tunes from the sweetest loversrock to the roughest dancehall!

Amsterdam:
Selector Ramses & Brother Tobias. Both members of ‘One Love Tribe’. Brother Tobias being a world famous singer, having released many albums as
main singer of the Class A Rocksteady/Reggae band ‘Rude Rich and the High Notes’. This night putting his sweet voice on the riddims played by
Selector Ramses, known to be a Reggae veteran who’s been playing for decades all across Europe. Owner of Disfish Records label, member of
On-U Sound and founder of Reggae Bar Amsterdam.

Reggae Recipe. One of Amsterdam’s finest when it comes down to throwing Ska, Rocksteady and Early Reggae parties in the Netherlands.
Their anual Reggae Recipe weekenders with international sound systems, DJ’s and selectors and the tastiest food you can imagine are legendary!
Bopper and Rico are the ones who will represent this great movement with verve!

Vette Mette. Arguably the best Reggae DJ currently in Amsterdam. Member of ‘Cut It Dub’ and ‘Bassculture Sound System’. This man is known for
his surprising and skilled mixes and is a guarantee for a top party!

Rain Petit. Only on the Amsterdam Reggae scene for about one and a half year, but booming like a mofo! To be found on more and more parties
around town, for instance on the next Church Of Dub party in Ruigoord in April.

See you all there and then for this unique party night!