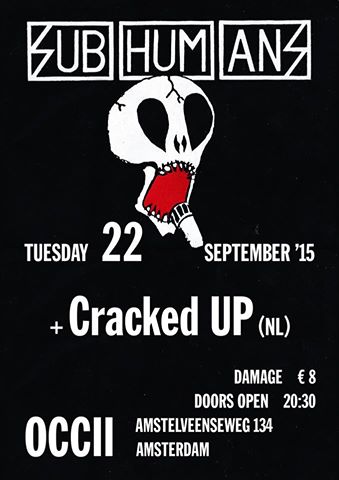 Subhumans gig CANCELLED due to heart problems of the guitarist. Bruce is recovering from surgery but is alive. Wishing him all the best!

Subhumans were, between 1980-85, one of the most prolific and original of the evolving UK punk scene.

Musical influences were a mix of Sex Pistols, Damned, and similar punk originators and prepunk bands like King Crimson and Frank Zappa, which led to a style of punk more intricate in its structure than their contemporaries, without losing the base energy and dynamics of punk.

Dick’s lyrics, at once socially aware and heavily critical of social norms, placed them in the anarcho-punk area, alongside Crass, Antisect, Conflict, and Flux of Pink Indians, who released the band’s first 3 EPs and their first LP “The Day The Country Died”, which became an instant classic.

In ’83 they formed their own label, Bluurg Records, and over the next two years released “From the Cradle to the Grave” LP, which was released after splitting up in ’85. By then they’d played 262 gigs including several European tours and 2 in the USA (which was in the 80’s a rare achievement for a non-commercially minded band).

Dick went on to join seminal ska-punk-reggae band Culture Shock, and met up with Phil and Trotsky again in Citizen Fish, who have so far recorded 7 LPs of their politipunk-ska songs and clocked up over 1000 gigs across the planet. Then in ’98 these 3 ex-Subhumans roped Bruce back in to reform Subhumans, to ‘see what it felt like’, and, it feeling rather excellent, have kept going with occasional touring and a limited release CD of old unused songs, “Unfinished Business”.

Since then, Subhumans have released a new album, “Internal Riot”, and toured in Europe, the USA and Australia.

Queens of the Stone Age recorded and released their version of a Subs song ‘Wake Up Screaming’, and the film director Asia Argento has asked to use Subs music in her adaptation of “The Heart is Deceitful Above All Things”.

“Frontman Dick Lucas is totally engaging. There is a fierce intelligence here in his lyrics, his delivery and his between song banter where his passion for the old school punk political hits home. They play fast and there is a wild, feral energy to what they do. They have this punk rock thing so honed down, so perfect – the fluidity of the rhythm section, mind boggling brilliant bass lines from Phil to let yourself go to and Trotsky’s stop start drums that never settle for a boring 4/4 when something more exciting will do are so effective. Bruce’s rasping punk rock guitar completes the perfect backdrop for Dick’s passionate delivery – he works himself up into a sweatshod frenzy as the band hit the stage in top gear and never leave that level of intensity. If you still need any proof of the intelligence and anti establishment smarts in punk rock then the Subhumans are still out there, still meaning something and still making sense in a senseless world.”
– Louderthanwar.com

“Considering how long this band have been going it’s incredible how much energy they still display when they play live. Frontman and lyricist Dick Lucas is still an absolute inspiration. Somehow he doesn’t seem to have aged a bit proving that the anarcho punk lifestyle is obviously good for your health. Incredible band.”
– Caughtinthecrossfire.com

CRACKED UP
Started in the late 2013, Cracked Up puts together a quartet of ladies who, coming from different backgrounds, are equally pissed off at certain things, and eager to lay them down in a bunch of songs for you to enjoy. Consequently, all our songs are our own. Born and bred, and grown up in all their nastiness.
We’re Amsterdam-based, punk-rooted, loud, opinionated and,fundamentally… cracked up