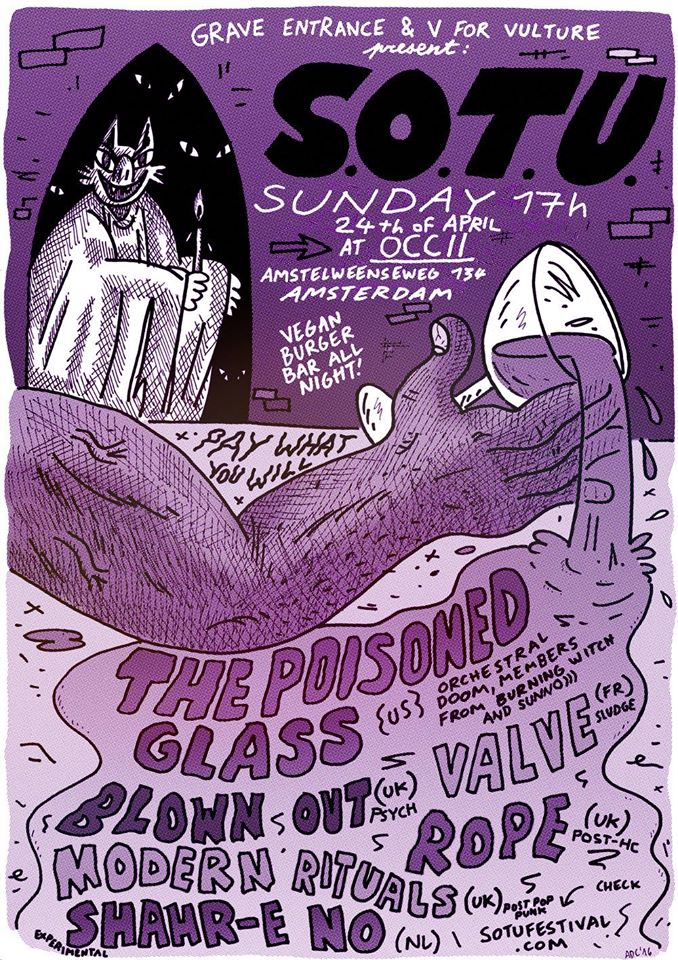 Ritual Productions are exceptionally thrilled to announce the signing of The Poisoned Glass, a duo comprised of two members of the legendary doom band Burning Witch; vocalist Edgy59 and bassist G.Stuart Dahlquist.
After the demise of Burning Witch in 1998 and going their separate ways, the two kept in touch, occasionally making overtures towards working together and knowing that they would when it felt natural. The Poisoned Glass started with the song ‘Silent Vigil’, a twelve-tone progression Dahlquist had originally intended as a tonal bass solo. After experimenting, he felt that the resulting sound was heavier, more despondent and unforgiving than any of his existing projects and sent the rough mix to Edgy, who understood immediately that this music represented perfectly both voices as a unit. It came naturally, as though it was meant to be, and with that, the duo formed, and set out to record as The Poisoned Glass.
The instrumentation is exclusively centred around bass guitar, organ, and voice – nothing more. In spite of seemingly limiting instrumentation The Poisoned Glass is far from minimalist; the atmosphere is bleak but so dense it is virtually without air. Dahlquist’s unison bass and organ is massive, building, evolving and expanding, punctuated by Edgy’s unbridled tenor and the irregular jarring of one or two note dissonant harmonies.
https://www.facebook.com/TPGeternal/

The Poisoned Glass 'Toil and Trouble'

Blown Out are a UK based power trio that evoke the psychedelic jam music of San Francisco’s glory days – effects-laden guitar jamming that goes nowhere and everywhere, held down by a hypnotic groove that never misses a beat, no matter how long they play without pause. The blues-rock roots of the jamming makes for a calming experience, after the head-fuck you’ll experience waiting for them. Sonically heavy rolling-thunder basslines, shaped by total head-change waster infused guitar freak-outs, gelled together with steady freeform rhythms. You have to learn to die before you die. You give up, surrender to the void, to nothingness.

VALVE is a sludge/doom/hardcore band from Paris, France, that has been playing for about three years now. The music of the quintet has evolved towards a blend of dark, heavy and oppressing sludge and chaotic, aggressive hardcore, following the enormous footsteps of some of the biggest European bands playing that kind of music – Amenra and Celeste, just to name a couple . The band has been rushing European stages for the last two years delivering a wild and intense show and has no intention to stop. After releasing their self-titled demo, back in 2012, they now finally deliver their debut full-length album that goes by the name of Apnée. CVLT Nation described it as an album containing “five jams of sludge laced with some raw and uncut hardcore. VALVE are not afraid to fuck with song structures, which only helps to keep their songs interesting. It’s now time for you to press play below so that you can hear this kick-ass band for yourself!”

Formed from the ashes of Cardiff hardcore mob Goodtime Boys, there’s a looser energy to Rope. Recorded live and often just a hair’s breadth from improvised, it’s driven by instinct. Tracks seem to echo on for an eternity, moulding themselves into captivating new shapes throughout. Calling to mind the cavernous, twisting work of groups like Shellac and Self Defense Family, ‘Manteision Bodolaeth’ nevertheless keeps two feet on the floor throughout, vocalist/guitarist Kai Woolen-Lewis’ throat-shredding takedowns of modern etiquette and societal bleakness ensuring these otherworldly structures retain their foundations in the here-and-now. – DIYmag.com

Modern Rituals play a fuzzed out form of noisy post-punk. They perform as a three piece, though the project exists in differing line-ups with the core song writer Harry Fanshawe, formerly of The Long Haul.

They began life with a demo that was recorded in a day with Sam Thredder at the Cro’s Nest, but a debut EP has just been completed with the collaborative help of producers Lewis Johns (Creeper, More Than Life) and Mark Jaspers (Witching Waves, Slowcoaches).

Formed in August 2015, this band is still very much starting out. However, given the experience of their current members, they have already carved themselves a unique and varied sound. Their debut carries the British post-punk sensibilities of The Nightingales or Protomarytr, the heavy fuzz of Ovlov and the pop dynamics of The Lemonheads.

Shahr-e No is Persian for ‘New Town’. It was the name of a red-light district in Teheran, bulldozered after the 1980 revolution and featured in Kaveh Golestan’s photo series ‘The Citadel’. You might find this combination of eastern sensibility, realism and dark subject matter an interesting thing to hear and see.

The age old fact that technology and policies change but human nature won’t hands us enough musical and verbal subject matter to not have to resort to today’s endless copies of bands that already copied Black Sabbath. We look towards other influences: the Belgian h8000 scene, the 19th century decadent movement, progressive black metal, Justin Broadrick, Brainbombs, Ramesses and our own Hieronymus Bosch in pursuit of eliciting the darkness that we all already know. We are as much the Prodigy as we are Serge Gainsbourg, combining human-played breakbeats with the sounds that elevated Tim Bagshaw to the height of Gloom and Doom. To be able to play this concoction, we jammed with each other for so many years and did so many strange things to ourselves that we wield near-practical telepathy with abandon.

And we still like Kool Keith, Pusha T and Skip James better than Sleep.

♥PAY WHAT YOU WANT♥

Entree: Pay What You Want.

SOTU (Sounds of the Underground) is a music festival and cultural foundation organising events centering on and celebrating some unique aspect of the global independent music and art community and its diy and counter cultural traditions. The festival takes place in Amsterdam (the Netherlands, since 2012) , yearly around April. In 2014 a special edition took place in Lithuania, over 10 days in 5 cities organised by Arma Agharta. SOTU´s passion for genre bending sound and performances is at the heart of all their events – you can listen to noise, prog, folk, avant jazz, hardcore, electronica and bass.