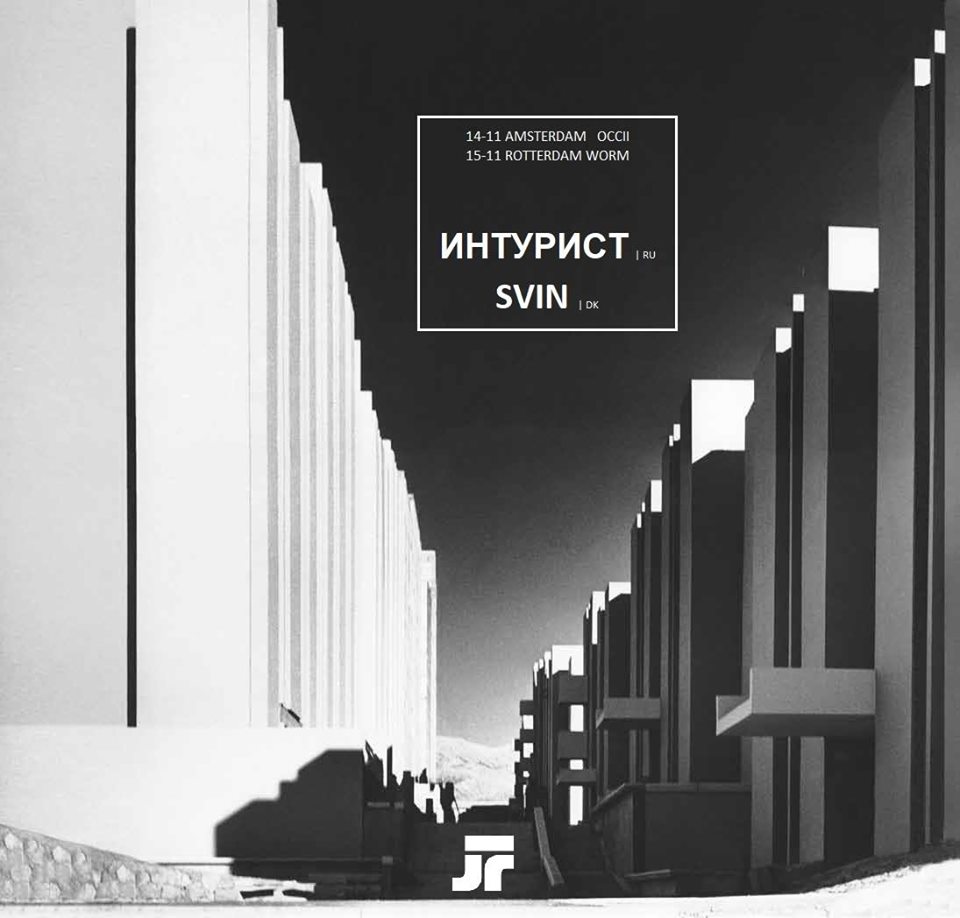 SVIN (DK)
SVIN is an avant-garde rock band based in Copenhagen, Denmark. The band’s debut LP 2011 Heimat made waves and since then SVIN have been busy developing their pulsating abstract rock with layers of drone-based folklore and ambient noise.

Интурист (RU)
Inturist is an audio-visual project by producer and media artist Evgeny Gorbunov, known from bands such as ГШ / Glintshake and Interchain. At the core of Inturist’s approach is an intuitive act of creation, improvisation, work of the unconsciousness, therefore all of the concerts of the project are different, with the different cast of musicians and instruments. Inturist builds a new sick world around him using the absurdity of everyday life and abstract sound structures.

The first album includes several spontaneously written and arranged on the fly songs about everyday routine, which is run through the unconscious filters. «Командировка» (‘Business Trip’) finds itself in the position of a person, who doesn’t live in a current moment, who sleeps, while being awake. Maybe he is busy with some repetative procedure or is on his way — not in the point A anymore, but not in B yet, therefore nowhere. In this condition a person can randomly focus his attention on the most negligible details, unwittingly expanding them to the humongous sizes, replaying same phrases again and again in his head, repeatedly move random part of the body without even realizing it. The second album «Экономика» (‘Economy’) shows us the same person (maybe) waking up in a panic and confronting reality, a man in a hurry. Today’s Inturist’s gigs are somewhere between these two states.

Spoelstra
Spoelstra calls his music ‘extreme songwriting’. Far fetched mutations of noise rock, math, avant garde, electro and country. What Spoelstra makes live on the spot, as one man using a guitar, a synthesizer, samplers and effects, is radical in many ways and certainly a menace for the average dancefloor, but Spoelstra firmly believes there is no reason to let abrasive riffs, loose strings, stumbling patterns, rural outbursts and tearjerk twists stand in the way of a good song unless it is funny.

His latest endeavour involves gross misrepresentations of all songs of the musical West Side Story as performed in seven chapters. Spoelstra has been known to tackle gargantuan projects. On his resumé you will find a cd about the almighty internet, a cassette about the mysterious world of pallets and a vinyl record about everything you need to know about sports and finance. And now there is West Side Story Winner of Ten Academy Awards, an album on which Spoelstra has confronted all songs of West Side Story against all better judgment. West Side Story Winner of Ten Academy Awards is filled by hysterical prog events, discordant guitar alarms, polyrhythmic pile-ups, untrue country and fluffy drone