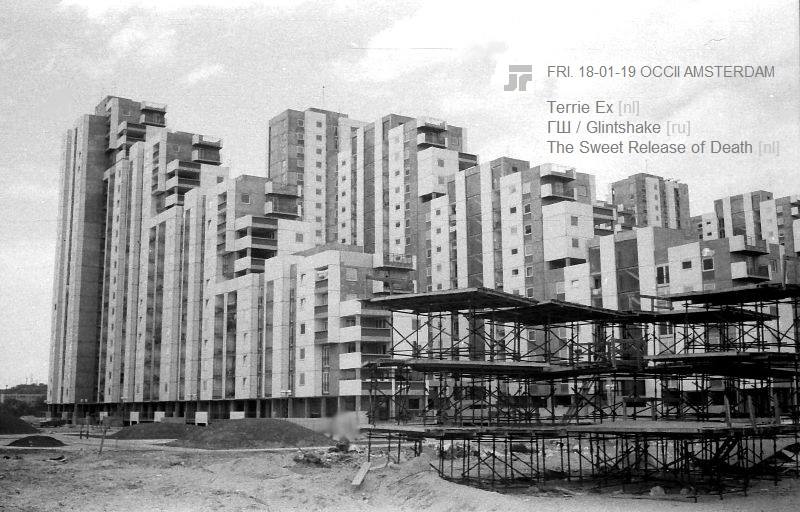 ГШ / Glintshake are a remarkable band. Driven by the twin forces of singer and guitarist Ekaterina (Katya) Shilonosova and guitarist Yevgeni (Jenya) Gorbunov, and propelled by a fearsome rhythm section in Yegor Sargsyan and Alexey Yevlano, this Moscow-based five piece make intelligent and forward-thinking rock music with a breathtaking skill and verve.

An incredibly charismatic and experienced live act, if still something of a secret outside Russia, гш / Glintshake’s sound is one of driving rhythms and chiming guitar duels fuelled by an unquenchable appetite for sonic experiment and risk, plus a humour and wit that need no translation.

Praised by the likes of Simon Reynolds, John Robb and The Quietus, the Moscow-based five-piece release a new album, Польза (‘Benefit’), their third full length and the follow up to 2016’s ОЭЩ МАГЗИУ (‘Oesch Magziu’).

Terrie Hessels started playing guitar when he co-founded The Ex in 1979. Kind of coincidence; it was the instrument no-one wanted to play. Some 1900 concerts with The Ex ever since. More than 2000 in total.
Next to all The Ex releases, he started free-improvising from the very start. From a little guitarsolo on the Awara/Ex 7″ in 1981, till tours with Han Bennink or impro-groups Offonoff or Lean Left (with Ken Vandermark, Andy and Paal Nilssen-Love).