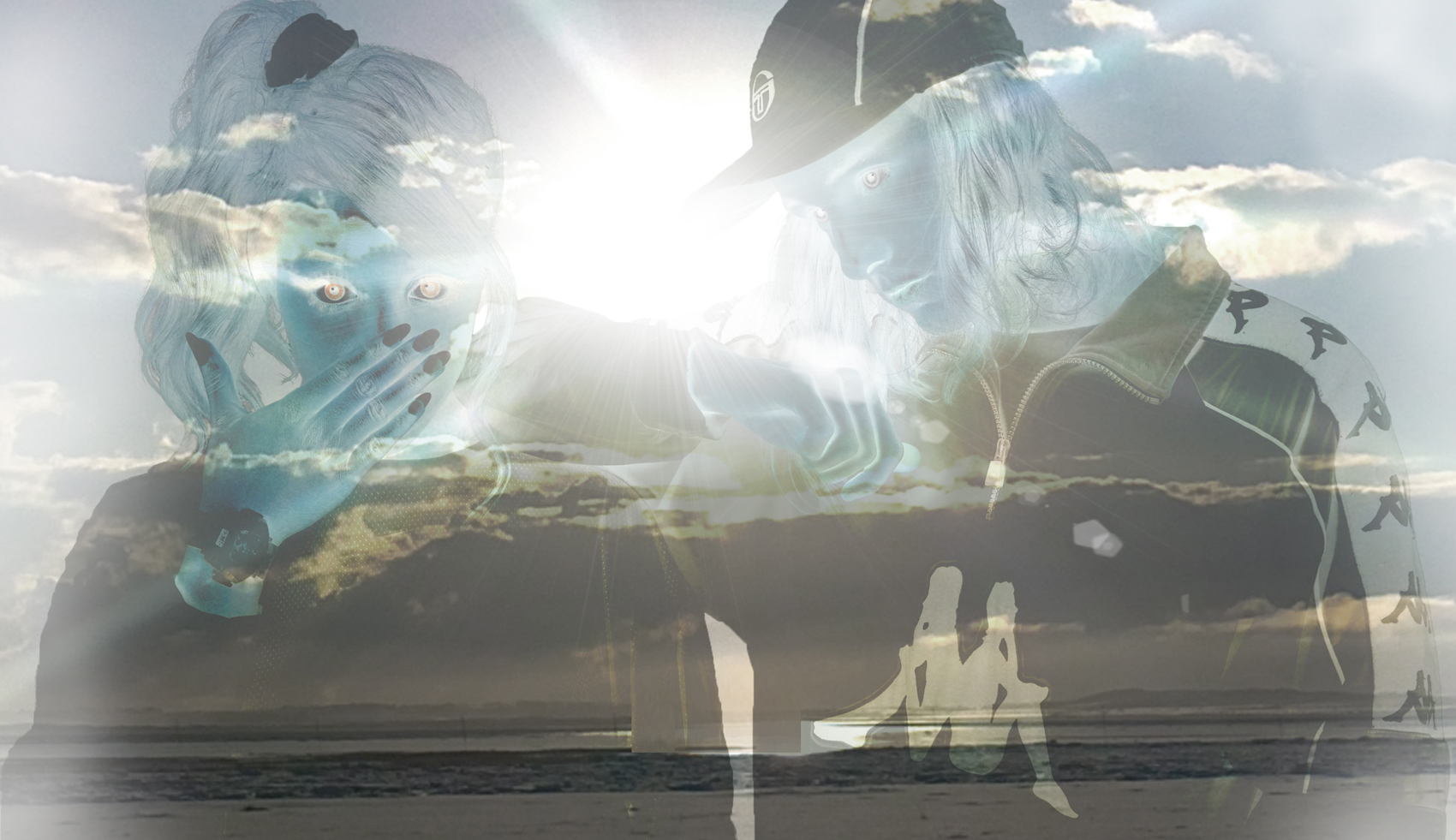 Over the past years the Marseille duo Ideal Corpus has brought their energetic mix of hip hop, ghetto techno and seapunk to audiences in Europe and Japan, and even further across the internet.

In chatting with KNiK, Ideal Corpus’ MC Kawaii and Fruity Free share their thoughts about online music, handsome boys and their dream of an underwater show.

Fruity Free and MC Kawaii sit next to each other behind the webcam. Fruity Free has a perfect curly line shaved on the sides of his head, and MC Kawaii has dark purple eye shadow and a neon yellow cap on. They frequently giggle and discuss a question between them before answering. When we start talking, they accidentally let slip their real names and ages, and as they discover their mistake, they ask if today I can let them be 40 and 14. “We like to make up fun ages,” MC Kawaii pleads, “usually we prefer 1 and 99. Would that be OK?”

It’s impossible to pigeonhole these two musicians, and it’s almost as hard to define what they do exactly, because it’s more than one thing. It all started in a Parisian dance school back in 2007 where MC Kawaii took tap dance lessons. Fruity Free had breakdance lessons in the same school. The first time that MC Kawaii saw Fruity Free there were two other boys in his class who looked very similar, she remembers. “The three of them were super handsome, and at first I couldn’t decide who to talk to,” she says. But when she started talking to Fruity Free, they discovered that both were interested in exactly the same topics: music, the internet, and philosophy. “From that moment,” MC Kawaii says, “we couldn’t really stop talking to each other.”

While MC Kawaii was born in Paris with Malian parents, Fruity Free grew up in both Germany and the south of France, and studied in Paris. “After we met, Fruity Free told me that the light in Marseille was so beautiful,” MC Kawaii says, “that’s how he convinced me to come with him to Marseille.”

When they started making music together, they wanted to combine different musical styles. Fruity Free sums all the styles up: “Hip hop, grime, UK garage, Vogue, Kuduro (Angolan techno), juke/footwork, witchhouse and seapunk.” MC Kawaii interrupts: “Yes, but hip hop was too male dominated for us, and Vogue was mostly for gay men, and still not really for women. So we wanted something more inclusive, but we still wanted to play all those different styles.” They found a solution: the internet. Fruity Free: “The internet is the place where everything can exist together. It just stores all those different types of music and that’s why we focus on it too. We believe that the internet is the most important place for music. Without it, we wouldn’t know of all these genres, and we wouldn’t be able to combine them in our music.”

So how do they write their songs? “First I see something,” MC Kawaii says, “it starts with something visual. Then I sing about it and then we find sounds that fit the image and story. But it’s not like all of our inspiration comes from the internet. We’re also still inspired by what’s happening in the streets of Marseille,” MC Kawaii says.
“We use the abbreviations IRL and URL,” Fruity Free explains. “IRL stands for ‘In Real Life’, and URL means ‘Unreal Life’. It’s a matter of combining the two well.”

A lot of Ideal Corpus’s activities are located between reality and dream worlds. Besides their music they’ve also done community work, doing kid’s workshops in both Marseille and India. “They are always a lot of fun,” MC Kawaii says. “We tell the kids to act like the person they would like to be, which can be the best football player in the world, or a famous singer or a director, whatever. And then we organise something together. Because they act like the person they want to become, they’re training to be more confident in the things they’re doing.”

The method they’re teaching these kids is what they believe in for themselves too: “If you set yourself a goal,” Fruity Free says, “it’s more likely that it’ll happen. In the summer of 2012 we had one month in which we wanted to play 15 shows in Marseille. And we succeeded.”

Soon after that summer they toured Europe and Japan. “Another dream of ours is to play Africa,” Fruity Free says. “But our biggest dream…” they look each other in the eyes and then Fruity Free continues: “is to play an underwater show! The audience will be under water, so they can experience the music through their whole bodies.” “They’ll be in a swimming pool!” MC Kawaii adds. “Michel Redolfi has done it before, and we want to do it too with our own music one day. We set ourselves that goal.”