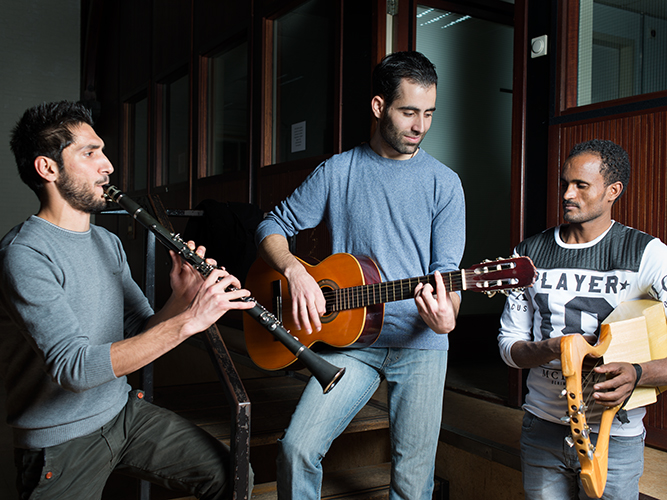 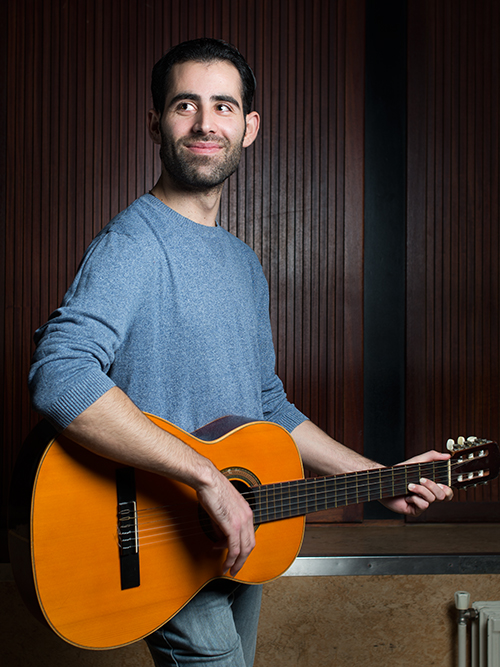 Around the corner from OCCII 220 men found a temporary home in refugee shelter De Havenstraat. Among them, Gerrie, a professional krar player from Eritrea, and Shaghaf, a popular young band from Syria. We spoke with them about their music and their hopes for the future.“Our first dream is to have our band complete, our second is to play Het Concertgebouw.”

They were friends first, studying at university, then they became a band. We meet the Syrian musicians Nezar (27) and Kenan (24) in the central hall of the Havenstraat, a former prison in Amsterdam, which is now being used as a refugee shelter. Around 220 men from Eritrea, Iraq, Syria and Afghanistan have a temporary home here. Dinner has just been served, and some people are still eating from a plastic plate. The hall is buzzing with men conversing. Nezar and Kenan want to talk about their music, but not about war or being a refugee.

They take us to the theatre room of the old prison, where they practice now. After the whirlwool of people in the main hall, it’s strangely quiet in here. “Unfortunately we can’t have shows here, Nezar says, “because the fire-brigade doesn’t allow that. But we can practice here, which is nice.” 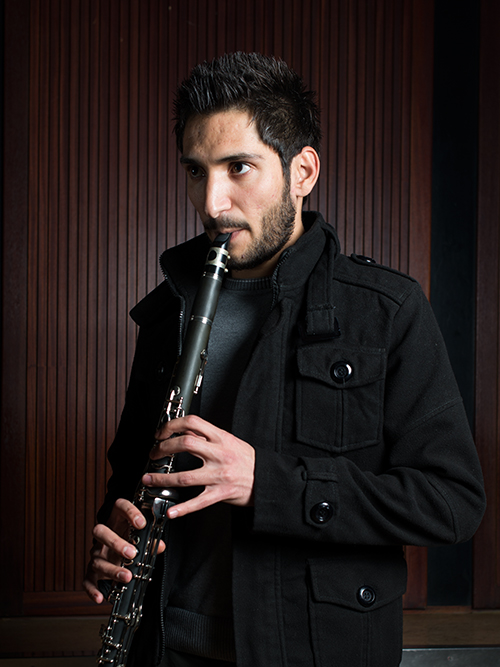 “Our band is called Shaghaf,” Nezar says as they offer us tea. “That means Passion, because music is about passion. We play old music with modern elements.” Back in Damascus they practiced on the streets and in their homes, and sometimes a practice became a concert. They played around 10 official shows, Nezar estimates. They remember in particular one of their performances: “We were playing in a basement,” Nezar says, “and then we heard a mortar shell at the entrance. It didn’t fall down the stairs, but everyone was scared of course. We decided to continue playing, to calm people down.”

Shaghaf has seven bandmembers, but many of them fled; to Austria, France, and The Netherlands. It was a coincidence that Nezar and Kenan met each other again. “That was on the 1st of October, here in the Havenstraat,” Nezar says. “I had arrived the day before, and when I went downstairs in the morning, I saw Kenan. We were like: ‘What are you doing here?’” he laughs. “That was such a surprise.”

The two of them discuss something in Arabic. “You have to write down the names of our other band members,” Kenan, says, and he takes my note book as he writes:

Even though the band is now spread over different countries, they still keep in touch: “We send each other music through video calls,” Nezar says. “That way we still know from each other what we listen to and what we’re learning to play.”

Asking a band that’s escaping a war what’s next for them, seems weird, yet the members of Shaghaf think about the future. “Our first dream is to have the band together,” Nezar says, “no matter where. Our second dream is to play Het Concertgebouw. When we were standing in front of it, we found that building incredibly beautiful.”

As we’re taking photos of Nezar and Kenan, the door opens and Gerrie and Merbrie, together with their Dutch teacher Tanja, enter the theatre room. Gerrie is a krar player from Eritrea. A krar is a five stringed instrument from Eritrea and Ethiopia, and Gerrie has played it ever since his father gave him one. Merbrie plays keyboard for Gerrie. When they met in De Havenstraat they found out that Gerrie’s wife is from the same village as Merbrie, and that’s how they became friends. Mebrie plays the krar too, but not professionally he says.

While Nezar and Kenan continue playing softly in the background, Merbrie translates for Gerrie. “I learnt how to play the krar by listening to music and playing along,” Gerrie says. “I have played a lot of Eritrean weddings. My biggest wish now is to play Eritrean weddings here in The Netherlands.”

The instrument is hard to find outside of Eritrea or Ethiopia, yet during his stay at De Havenstraat he got one. How did that happen? “A few weeks ago,” Merbrie says, Shaghaf was playing in the sports hall, and we went to the party in our festive clothes, the kind that we wear to weddings. Then people started asking if we would play too. But we couldn’t, since we didn’t have a krar.” That’s when Tanja, helped out. “I didn’t have to do much for it,” Tanja demurs. “I only posted a call on Facebook, and people shared it, and then people wanted to help and we got these instruments for free,” she says. “Quite easy, I was surprised too.”