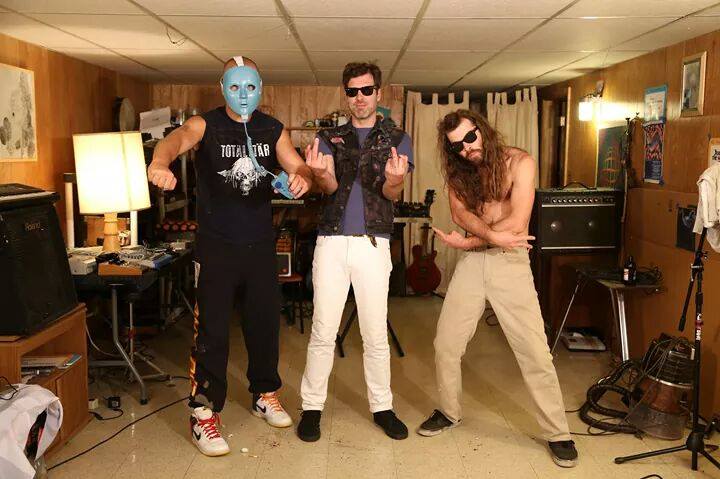 Wolf Eyes, recently dubbed ‘the kings of US noise’ by The Wire, are a band from Detroit that has been around since the nineties. Wolf Eyes member John Olson (b. 1972) talked to us about their upcoming European tour, his label American Tapes, and how making music is a lot like trading skate boarding tricks.

KNiK: Hello!
John Olson: Can you see me?

No.
But you can hear me?

Yes!
Oh, alright. It’s my first time using Skype, this will be fun…

Let’s start the fun. What are the sounds you’re looking for when you’re writing music? Your bandmate Nate Young has used the term audio horror..?
Well, we just keep moving sounds around and keep rehearsing a song, till it’s got the spook.

A spook?
You know, you’re playing a song, and all of a sudden, it’s real haunting and you know it’s there. It’ll chill up your spine all of a sudden. It’s a bounce between eariness and simplicity. So we just keep working on songs till they have the bonafide spook, and then they’re done.

Do you always agree on when they’re done?
We disagree a 100% of the time. It’s not easy to change a song into a good one. It takes time.

What do you do when you disagree?
We keep trying in different ways, you slow down the tempo, you add different layers to it. The songwriting process is just like clay. It’s real slow. Right now we’re getting ready to go on tour, and we got a bunch of new songs, so you don’t know till really the end of the tour, after you played them live, if they’re gonna have the spook. You gotta play them in front of people, and push them around here and there until they develop their own natural chores. But we all really love playing live. So it’s a labour of love.

You’ve compared recording to creating universes. How does that work?
When home recording was invented and there were devices for people to record themselves, that really opened up possibilities. You were suddenly able to create your own history of your own recordings and your own sound! It was very self-empowering to be able to control everything yourself; it goes back to the whole punk ethos, that you can do completely everything yourself.

The first time I experienced this was in the spring of ’92. I was teaching art classes at college that year, and I got home feeling tired. It was the day when people turned their clocks forward, and everybody was completely screwed up by it in the morning. I was confused when I got home and I just went to the basement and recorded some organ lines and I just felt… everything. And then the taperecorder made it possible for me to record all those feelings, and to listen back to them later. I realised it would be there forever, that I had control over it. So ever since then, it was so addictive. It’s kinda like a diary, but a little bit more abstract, because not everybody wants to read a diary.

What was the best recording you heard recently?
This morning I was listening to Sidney Bechet. That was really good. I have a schedule for listening to music, I only listen to one style a day. I kind of isolate myself for one style of music a day, rather than just listening to a bunch of stuff on random. That way I feel I get more out of the music. So Mondays are reggae days, Tuesday is usually jazz or German stuff, Wednesday is usually Indian music, Thursdays I just listen to organ music or classical music, and Fridays is metal, Saturday is sometimes Velvet Underground and then some more metal, and Sunday is DJ Screw day. I wished you could see my phone, but I don’t know how to Skype yet, haha!

How did that start?
Well, I’m a really insane record fan and all that. So I would listen to the one thing, and just get completely obsessive over it, for weeks on end, and I would get burnt out of it, which I thought was a waste. So changing it up every day gives a jump start, it’s shock therapy for my brains, so that I’m starting from scratch everyday. And every day when I return to a certain style, like every Monday I return to reggae, I find something new. I feel like I’m getting more out of the music this way. 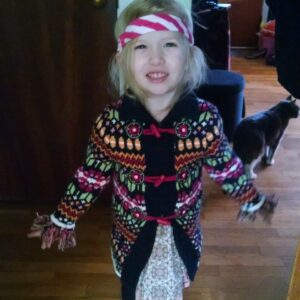 You have a daughter. What would be the ideal music for her?
I don’t want to force her to do anything. She just turned three, she’s taking her afternoon nap right now in the other room. But I can tell you that another advantage of listening to one kind of music a day, is that she hears a million different styles. She really likes the reggae Mondays. And she like death metal a lot too. She loves to dance more than anything. So I’ve played the drums and she sang a couple of times. I think she’s going to be the singer kind of person in the band. She likes the attention and she loves to trick people.

Wolf Eyes make handmade art on tour to sell as merchandise. What is the value of that to you?
Early on we were hardly paid anything when we were on tour so we had to have a bunch of merchandise to be able to eat and go to the next gig. So since we didn’t have access to mass produced things, we would do it by hand. It became so normal for us to make stuff to sell, that even to this day we still do it, for every single gig. It’s kind of an aesthetic decision rather than something else. When you see brand new sterile things.. not only is it wasteful for a bunch of things, but to have something recycled and handmade, I think it has more of a spook to it than if all objects would be the same. And we all like to draw and be hands on, which goes as far as the circuitry of our equipment. In terms of control it’s just getting closer to the actual experience itself.

You play both small and bigger venues, where can Wolf Eyes be heard best?
Having both is amazing, you gotta be able to convey your message on both. There’s something to be said about playing in a club to a bunch of people that don’t want to hear you. You’re more isolated, so you have to make your message a little stronger. We played for Aphex Twin, for like 3000 people, and no-one wanted to hear us. In terms of aesthetics it doesn’t get much better than that. Because you’re being yourself in front of a bunch of people who don’t want you to be yourself, and then you play even better. So small clubs are fun, they’re amazing, but the big clubs are a challenge. You don’t want to play for the converted all the time. It makes your aesthetics weak. It’s like skateboarding, which I’m getting ready to go do in about an hour, what makes skateboarding so amazing is there’s always the threat that you’re gonna die, hahaha. And you learn a new trick and not only does it feel amazing, it’s like getting eight new words that you never learnt before, and you can form new sentences with them. It’s hard to sleep at night, it’s so exciting!

In 1992 you started a record label, American Tapes, on which you released noise bands. If you look at the list of releases, could it tell us something about the development of the noise scene?
I’m glad that American Tapes existed in a certain period and that it documented a scene that was really fresh and creative. I hit a thousand releases, but now I’m in the process of stopping the label. I think that every scene has a life span of five years, and it always needs a turnover. What appealed to me about experimental music was exactly the fact that it was experimental and that people were taking chances. But as soon as the experimental scene got to a certain level, people were just laying upon the tradition, and upon stuff that’s already been layed down. That’s not radical anymore, it isn’t making anyone mad, it’s not taking any daring chances on a social level.

Isn’t the noise scene experimenting with any new things anymore, you think?
Well it got categorised and it got divided and it got so many rules. When I was a kid it was the insane abstract wilderness of it that was so appealing to me. There was nothing to find, it was a wide open space. It’s what Jackson Pollock must have felt when he finally turned the canvas into a two dimensional linear universe with no end or beginning. But you can only do that for so long. Nothing is for forever. The more new stuff you can inject into something, the better. Newness and criticism are the best things for radical culture. I think Salman Rushdie said that anything that is not able to be challenged or criticised doesn’t need to be existing. That’s also why he says that religion is such a dying thing, because it’s not able to be criticised or changed.

Do you think that music scenes funtion like religion in some ways then?
Yeah. Music shouldn’t be a tradition at all, it should be fiery and it should rock foundations, especially under the disguise of underground music. There needs to be new generations all the time. Music needs to be like the ocean, it needs to be one set of waves coming in, and then the tide going back out. It needs to be constant in and out, a flux of energies. Everything is in a constant state of decay anyway. Your life is. Everything is. At the other end there’s new things being born all the time, and you just need to go with the motions of that, and not bitterly hang on to ideas.

It’s kinda ironic to say, Wolf Eyes being a band for so long, but we try as hard as we can to keep things fresh and new in terms of instruments that we use and appraoches and stuff. It’s a reciprocal thing to reference all the new cats and all the new kids that are going around under this… I wouldn’t say fatherly band, but sometimes it ends up being like that. It’s kind of where I’m going to skate in a little bit, I’m the oldest there, and I got a bunch of tricks that are old, but there’s these new kids that haven’t seen these tricks. So I trade old tricks and see their new tricks. They can take old things and make them new, and I can take new things and turn them old, haha. There’s a reciprocal energy running through the whole thing. And that’s all we’re trying to do with Wolf Eyes.