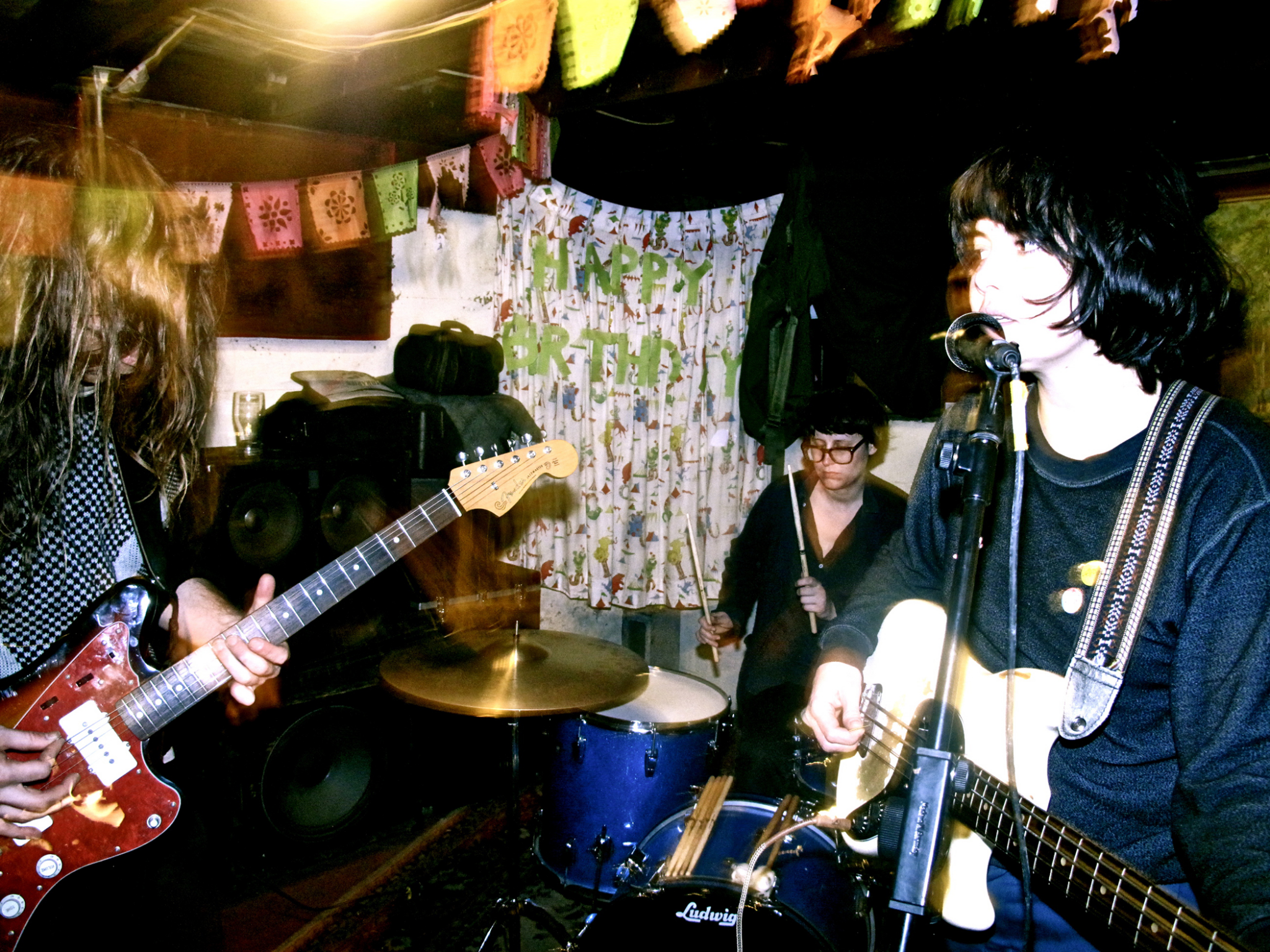 With roots dating back to the early nineties riot grrrl movement, the Olympia (US) band Broken Water could definitely be described as political. Their experimental sound is both noisy and dreamy with lyrics that reveal a refreshingly radical feminist voice.We recently had the chance to catch up with Kanako Pooknyw (drummer and singer) about her ideas on filmmaking, Olympia’s feminist community, and the upcoming American election.

For a punk band some of your songs are quite long. How do you decide if a song should be long or end after a minute?

You’re going to tour Europe for five weeks this fall. This will be Broken Water’s first European tour – how do you expect it to be different from touring the US?

I assume I will be in contact with many more people that have a connection and understanding of their own radical histories as well as the world’s. Broken Water is at a point in their trajectory where we play for more than just punks. I have found myself surrounded by folks that don’t know any radical history, or any history, because many of them simply were not taught any in the public school system in the U.S.

For example when I went to middle and high school in El Paso TX, we were only taught Texas history through a neo-colonialist conservative perspective. I believe most public school textbooks are written and printed in Texas for the entire United States to this day. I am not sure where I got the idea, but when I see protest in Europe, I think they must know their history. People don’t seem as conditioned to comply out of ignorance and fear.

You are also a filmmaker and make your own music videos. What do you like best about the combination of films and music?

I love being on the shooting side of the camera. I love the creative control over making our music videos and storytelling power found while editing my short films. However, music for me is a very physical experience where I meditate deeply and am present, while filmmaking is much more cerebral, yet very emotionally charged.

The video Beach took three years to make. Could you say something about the process?

I seem to get motivated to sit in front of the computer to edit when I am morbidly depressed. I took months planning, rehearsing, and coordinating the dance performance aspects of the video piece with other working class people and our schedules. After the shoot, the footage just sat on my computer until I was sad enough to want to work on it.

The aerialists in the video, Carlin Briner and Erica Keeling, are self-taught and practice and perform outside of any moneymaking reality. They do it for the love of the form. I had seen them each perform on various occasions and chatted Erica up for years as she pulled my shots of espresso across the street from where I work. I had also seen them both attend gay events that I would frequent over the years, so I was very interested in connecting with them and pleased when they agreed to work with me. (I came out later in life so the visibility of queers congregating and collaborating resonates deeply with me). I asked Erica and Carlin to play the eyes of the moon, that was their only direction, and they performed magically.

Your documentary 9 Weeks focuses on artists working to keep their community alive – what was it like to make this film in 2000?

I was in my early twenties when I made the video with Stefan Simikich. We shot and edited the entire film in 9 weeks, hence the title. The making of the documentary looked like me getting stoned, calling my cool friends on my land-line, showing up somewhere after lunch and hanging out to interview and document.

If you would make this documentary now, how would the overview of the community change?

Kill Rock Stars, K Records, Chainsaw Records were all vibrant businesses that employed many cool cats at the time, a very different scene than the mostly service industry and/or drop out community I am part of now. Most of my community in 2000 was older than me and had jobs at a label or made music for a cool label. Now, I am the 39-year-old weirdo that still goes to all-ages hardcore shows. Most people I hang out with currently are much younger, so a new documentary would include the voices of those with less experience, strong opinions, and new ideas. I have also been fortunate enough to work for the past 20 years at a vintage clothing store that also provides a low barrier clothing bank to those in need. The clothing bank has lent itself to creating relationships with street folks and build mutual respect with many people in need that live without shelter in my community. I consider many of the folks that frequent the clothing bank my friends and the diversity of experience and ideas (as well as the reality that those without shelter or are poor get scapegoated for Olympia’s problems by those in relative privilege) would motivate me to include interviews with my clothing bank friends, which would be a broader socioeconomic scope then the original video.
(You can watch 9 Weeks here!  https://www.buyolympia.com/q/Item=nine-weeks)

What are your hopes for the upcoming election?

That the Bush administration’s subsidized Lockheed Martin voting machines (which a four year old can rig) all crash and we have to actually count our votes and Bernie Saunders wins in a landslide.

In 2000 you helped organize the first Ladyfest. What was your key take away from that?

Teresa Carmondy and I were the two main people shouldering the financial aspects of Ladyfest 2000. This lent itself to being in contact with and supporting members of every sub committee that was involved with the huge (feat) event. I believe over 70 people were involved with the organizing. The residual effect was that after the year long process, I had a massive feminist community that I was surrounded by and included with for many years after. Having a living, breathing, functioning feminist community in 2000 and still to this day, is/was invaluable to my political and personal development. There is nothing in the world like girls getting along and supporting each other.

You’ve often talked about how supportive the music scene in Olympia is. Would you be in a band if you didn’t have the support from the community?