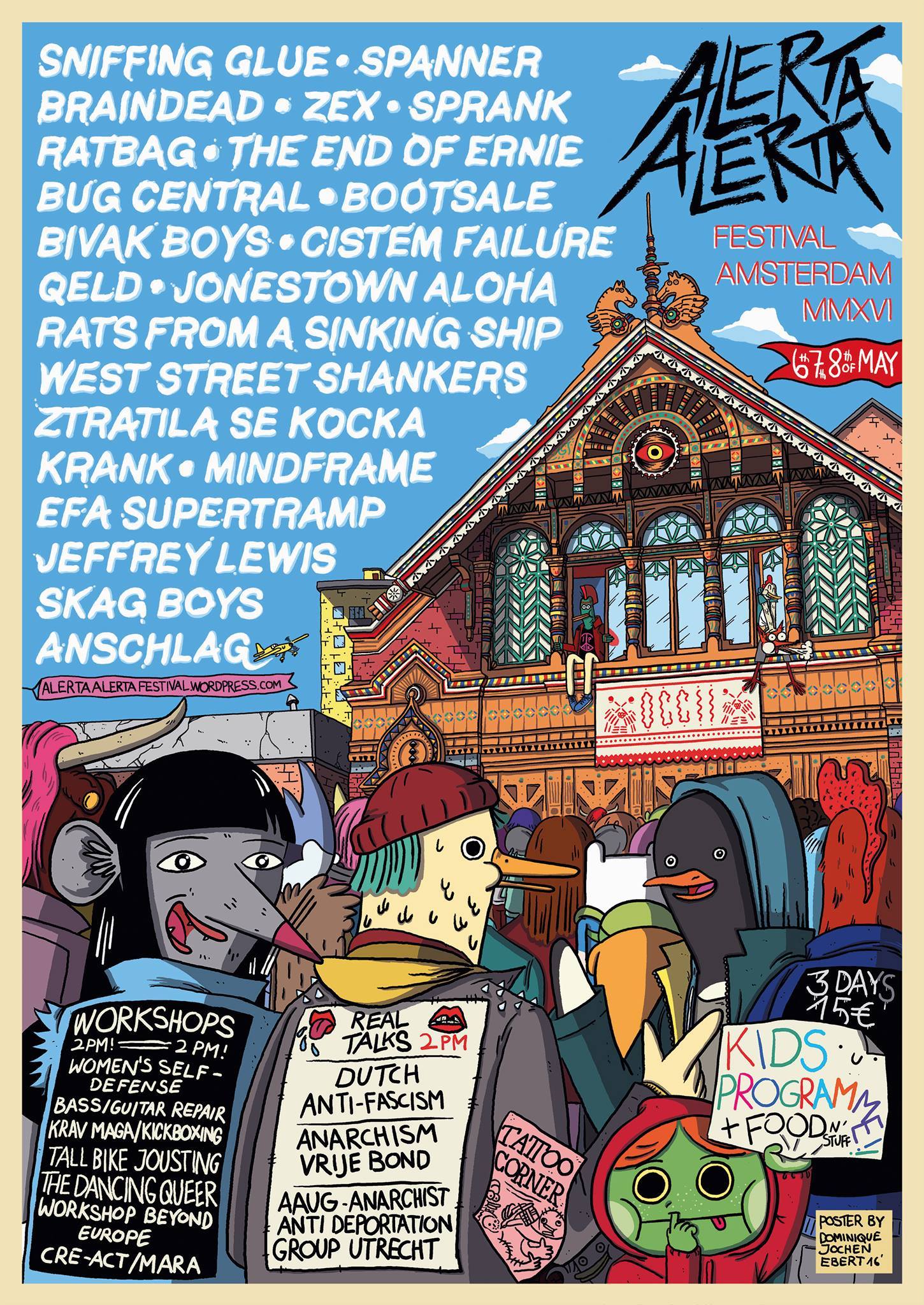 Get involved! Perhaps you have a distro or an idea for a workshop? Contact us at alertaalerta@riseup.net

SNIFFING GLUE (GER)
Playing straight forward 80’s hardcore punk in your face since 2006 they have released multiple records and toured even more.
“But as you read this kind of shit everywhere, just come along to one of our shows and get your ass kicked by punk.” -sniffing glue
We are Sniffing Glue-fuck you!
sniffingglue.de
https://www.facebook.com/sniffinggluepunk/

EFA SUPERTRAMP (UK)
Efa Supertramp is a folk punk singer/songwriter from Wales. Making a name for herself in the underground scene in the UK with her truthful attitude to life and politics. Her songs are angry but uplifting. Efa has been playing gigs since the age of 15 when she started Welsh punk band The Stilletoes. She has since toured all over the UK and Europe, playing in protests, squats, street corners, living rooms, bars and festivals, and has supported punk legends such as The Damned, TV Smith (The Adverts), Viv Albertine (The Slits) and Attila The Stockbroker. After touring Europe last year as a solo artist, experiencing grassroots and DIY projects, Efa was inspired to put on shows and start a label called ‘Afiach’ to release radical Welsh music.
https://www.facebook.com/EfaSupertramp
https://afiach.bandcamp.com/

SPANNER (UK)
Looking forward to UK ska punks SPANNER!! Knock out in-yer-face political punky ska from Bristol, England. They almost exclusively play benefit gigs at grassroots / DIY venues.
“Spanner has been mixing politics and pleasure since around 2000, and we aim to still be at it when it’s time for dancing on the ruins of the empire. We’re taking bookings for the after party now! Our sound is a small contribution to the soundtrack to revolution and we hope to inspire both much dancing and more direct action. We play militant, ska’d up punk that’s not just for entertaining “alternative” consumers or being part of the illusion of rebellion. Punk for us has to be more than noise and more than a hairdo. We want punk and punks to be part of a community in opposition and resistance to this murderous system which leaves everything it touches damaged or dead. We know that with our creativity and determination we can make a new world, and punk is about doing it now! We’d also very much like our music to strike fear into the hearts of capitalists, cops, bosses and politicians everywhere… if only they could hear the words!”
http://spannerintheworks.net/
https://www.facebook.com/spanner.easton/?fref=ts

BRAINDEAD (DE)
Ska/Dub/Punk/Hardcore from Hamburg, Germany.
Braindead set out to play political Punk/Ska/Dub, musically influenced by Bands such as Operation Ivy, P.A.I.N. and Dub Trio (not too mention all the radical Roots Reggae artists), but also Hardcore bands like F-Minus or Spazz. Being true to the DIY fashion of political Punk, they do most of the work like booking, printing shirts or creating artwork for flyers and records themselves or with help from close friends, and have played every thinkable venue from squatted house basements, action camps, boats, youth centers, festivals, and so on. The band is always happy to play benefit gigs for political causes they support.
https://www.facebook.com/braindeadskacore/?fref=ts
http://braindeadpunk.bandcamp.com/

SPRANK (NL)
A subversive folk trio that originated in the Gelderland countryside. Seem to thrive best in cozy living rooms and cozy eetcafes. Shooting up on any street corner with klezmer tinged waltzes filled with critical speeches that bring out the dancing mood!!
https://sprankband.wordpress.com/
https://sprank.bandcamp.com/releases

ZEX (CAN)
Punk from Ottawa, Canada. In the few years they have existed the band have already toured extensively around the globe including the United States, Malaysia, Indonesia, Singapore, Australia and New Zealand. The Ottawa quartet split the difference between heavy metal guitar action and punk attitude. The band features former Germ Attak member Jo Capitalicide (also of Iron Dogs) on guitar alongside vocalist Gretchen Steel, bassist Gab Sex and drummer Tasha. Can’t wait for their live show!!
http://zexzexzex.bandcamp.com/
https://www.facebook.com/zexzexzexofficial/timeline

JEFFREY LEWIS & LOS BOLTS (US)
Bringing together a nihilistic world view, a self-deprecating sense of introspection and a healthy dollop of absurd humour. Born and raised New Yorker Jeffrey Lewis leads a double-life, as both a comic book writer/artist and a musician. His band also has a multi-faceted existence, restlessly exploring a stylistic swath from contemplative folk narratives to distortion-fueled garage rock to soundscape abstractions and more. They have toured the world, blowing minds all along the way, can’t wait smile emoticon
www.TheJeffreyLewisSite.com
www.Facebook.com/JeffreyLewisBand
https://jeffreylewis.bandcamp.com/


JONESTOWN ALOHA
Four piece hardcore punk band from Amsterdam. Always ready to put on a tight show. Let yourself be swept away in the maelstrom of punk, hardcore and heavy rock that lowers down when the band are on stage.
https://www.facebook.com/jonestownaloha/?fref=ts
http://jonestownaloha.bandcamp.com/

QELD
Anarcho hip-hop duo from Bristol, UK, Bob Savage (MC) and Jenre (MC/producer), They have been friends since they were young and have been making music and performing together since 2007. They have played gigs in Bristol, London, Manchester, Milan, Geneva amongst a few for numerous anarchist, antifascist and other radical benefits. After a few years of gigs and pushing music videos online QELD are about to release their debut album Kush Zombies in early 2016. Soulful, golden-era, boom-bap beats. Angry, funny and radical words.
Laugh, dance, fight!
https://www.facebook.com/theQELD

BUG CENTRAL
Anarcho punk band straight outta London, England. Formed in 1996, they were staples of the 90s Hackney punk squatter scene. They were really active until 2002 then seemed to have taken a long break before kicking back to life in 2008. They play angry pissed off punk. ” This is one kick ass album! if u like punk. and im not talking about that lame blink 182 punk i mean REAL FUCKING PUNK! “.
https://bugcentral.bandcamp.com/
https://www.facebook.com/Bug-Central-113566775345698/

KRANK
Punk from Hamburg, Germany. Its loud, pissed off and they will be headlining the festival on Sunday night!!
https://www.facebook.com/wirsindkrank/?fref=ts
https://krankpunk.bandcamp.com/

BIVAK BOYS
Homegrown talent from the squatted marshland of Amsterdam!!
“Its a shame that producers leave their beats empty!! Thats not what they are meant for, ya know. Empty houses are occupied and in use, I do not see why it would be so different with beats. Empty is empty, we make no such distinctions.” After a long and arduous search through the city streets we managed to track them down and get them on board. They squat empty beats or “KraakRemixes” and they’re squatters, not rappers. They rap in Dutch and English and you are all allowed to sing a long to the beats that without doubt you will already know. Can’t wait for this one!! Goodnight Copyright!!

CISTEM FAILURE
Anarcha feminist folk punk queers from all over the place, fighting the cisheteropatriarchy one banjo at a time… members include Momma Swift and Roverrr. “We are a travelling Anarchist feminist queer band. We are involved in different political projects/spaces/struggles and try to combine our words with our actions when we can. We play rowdy political banjo folkpunk. We would like to see more non binary peeps, Transfolk, and female asociated people play music, make zines, take the space in male-dominated music scenes that we all deserve to be part of.”
http://cistemfailure.bandcamp.com/releases

THE END OF ERNE
Punk hc crust from Hellgium!! Being Around For Over 20 Years, Many Changes Of Line Up And Sharing The Stage With All Different Kinds Of Known! But Whats More Important! Unknown! Bands! That Circulated The Punk/Hardcore Scene In HEllgium,HOLland And GerMONEY!! Are here FASTER, STRONGER, CRITICAL And ANGRY! In You’re Face! Punkrawk!
https://www.facebook.com/THE-END-OF-ERNIE-144437752324480/…

RATS FROM A SINKING SHIP
Rapper Lusty’s savvy, often mercilessly funny lyrics make wise observations of bullshit in the news, coupled with Jamie’s chainsaw riffs makes a gripping, searing-hot metal/punk crossover sound that incites the ensuing rebellion that must follow in order to reclaim the world as that of one belonging to individuals and not that of corporations, governments, cult religions, mass ideologies or thinking. Add Tom’s dirty bomb basslines and Rob’s thunderous drum beats, and Rats From a Sinking Ship present bird flickin’, shit kickin’ punk rap.

+++ KIDS PROGRAMME +++
– Kraakopoly; a cooperative live board game to help eachtother prepare to squat a house. Throw the big dice and beware of the police! with Eri Kinderpret
– Paint living art with bacteries from your own body or surroundigs together with Malcolm Kratz
– Kids film screening with some homemade popcorn…

Will be running on Saturday 7th and Sunday 8th afternoon.