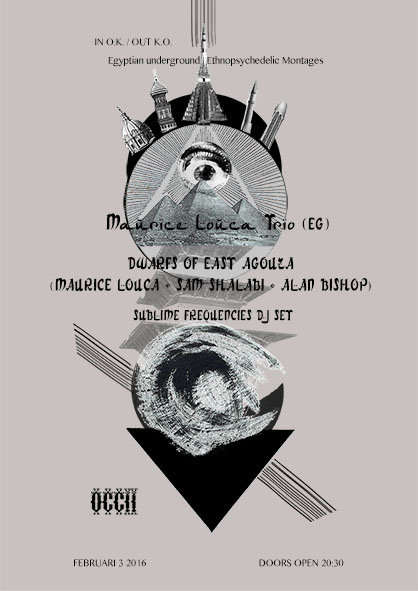 2014 release ‘Benhayyi Al-Baghbaghan (Salute the Parrot)’ has catapulted MAURICE LOUCA to the forefront of contemporary Arab underground music.
Inspired by many influences, from psychedelic to Egyptian shaabi, Louca shattered the confines of musical and cultural labelling with laying out a trajectory where beautiful and mesmerising fragments sparingly punctate the full-blown pounding episodes. For the recording Louca collaborated with Arab and international guest artists like Alan Bishop (Sun City Girls, Alvarius B.), Sam Chalabi (Land of Kush, Shalabi Effect) and vocals by Egyptian Mahraganat MCs Amr 7a7a and Alaa 50, to name a few. For live shows Louca has switched from performing solo, which he is continuing to do for special occasions, to performing with a full live trio.

2015 has been seeing him touring Europe extensively for the first time ever including prime gigs atIncubate Festival, Tusk Festival, Cafe Oto and a residency at Stuk in Belgium. He will return early 2016 to play Berlin’s CTM Festival.

The Dwarfs of East Agouza is a trio from Cairo formed in 2012 by Maurice Louca (keyboards/electronics), Sam Shalabi (electric guitar/synth), and Alan Bishop (guitar/saxophone/vocals). The group utilizes improvisation to propel their unique, exciting, and hypnotic musical vision. They are putting the finishing touches on their debut album which should appear sometime in 2016 and considering each member’s many individual projects and as difficult as it is for these three to be in the same place at the same time, this is a great opportunity to witness and hear this group perform live. 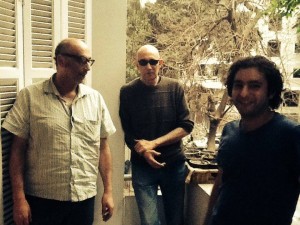 Do not miss it!

The night will be hosted by SUBLIME FREQUENCIES (DJ ALAN BISHOP)
Quite honestly one of the coolest, most out-there, most vital labels on the planet, Sublime Frequencies have been doin’ it since 2003. Founded by the brothers Bishop (Alan, Richard) and Hisham Mayet, SF was built upon a rich dedication to mining those parts of Earth that the anodyne construct ‘world music’ dare not even dip its toes. From their travels the trio have returned with- Cambodian Freak Beat, to Insect Electronica, to Syrian disco, Morrocan Desert Blues, Iraqi Pop and Burmese psych and… well just explore this outstanding imprint for evidence of its wild eclectic vision.

Listen to the exclusive mix Hisham Mayet of Sublime Frequencies made recently for The Wire’s Adventures In Modern Music on Resonance FM.
http://www.thewire.co.uk/audio/on-air/sublime-frequencies-mix

Reviews (excerpts)
‘One album rapidly making a home on the tQ stereo recently has been the new record by Maurice Louca’ -Best Albums of The Year 2014 -The Quietus
”Salute The Parrot’ is an exhilarating homage to the teeming energy of Egypt – politically ravaged but musically irrepressible.’ -Wire Magazine
‘While most other comparable local acts are still plodding around on the path set by Radiohead, Louca is miles ahead, comfortably experimenting with Flying Lotus-levels of complexity’ -The Egypt Independent