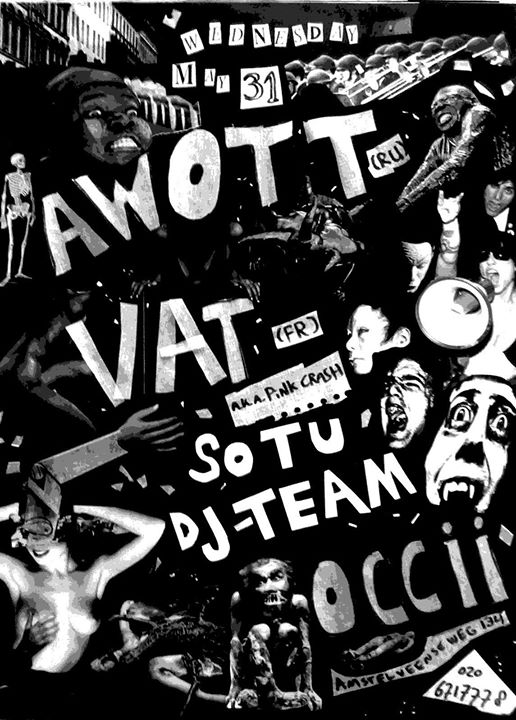 Always performing maked and in costume, Dadaist improv group Asian Women on the Telephone will play at OCCII ‘SOTU’ BAR May 31. The band’s sound takes from krautrock, noise-rock and sound collage.

From the ashes of Moscow’s underground, Awott came into being from a series of unskilled instruments and sound manipulations. The first recording went down in the home studio of Moscow’s esteemed sound fabricator Max Ionov, who later joined the band. Voice, sound and attire come into major play in the experimental outfit’s performances, where ghoulish figures produce strange sounds under the influence of Kraut Rock, Noise Rock and electronics.
Hailing in from France, VAT (aka Pink Crash) joins the bill with her voice experiments.

AWOTT
Москва, Russia
AWOTT since 2007 explore this and those Worlds, both sides of Good and parts of Evil, together with friends and random guests of both Worlds who disappeared into the volcanoes of Russia.
The Good first side is synth, which is came back. Another side is sax which became strong tenor instead alto. Drums and drummachine is stand for Evil in every beat it makes, good old Evil we all know since Ringo and Detroit. And Voices living in their wise lungs above bowels, who is evil of course. Alltogether this aspects boil-fight for love and peace and soul, against the limits, despite all square being. Behind the Masks.
https://asianwomenonthetelephone.bandcamp.com/

VAT (aka Pink Crash)
France
VAT is an improvised solo for voice and sound recorded with a telephone. This girl can do anything with her voice, you never know what will come out. It’s a soundscape written en directe.

Dj Bence from Haperende Mens will come and dj together with Tape dj VIS.