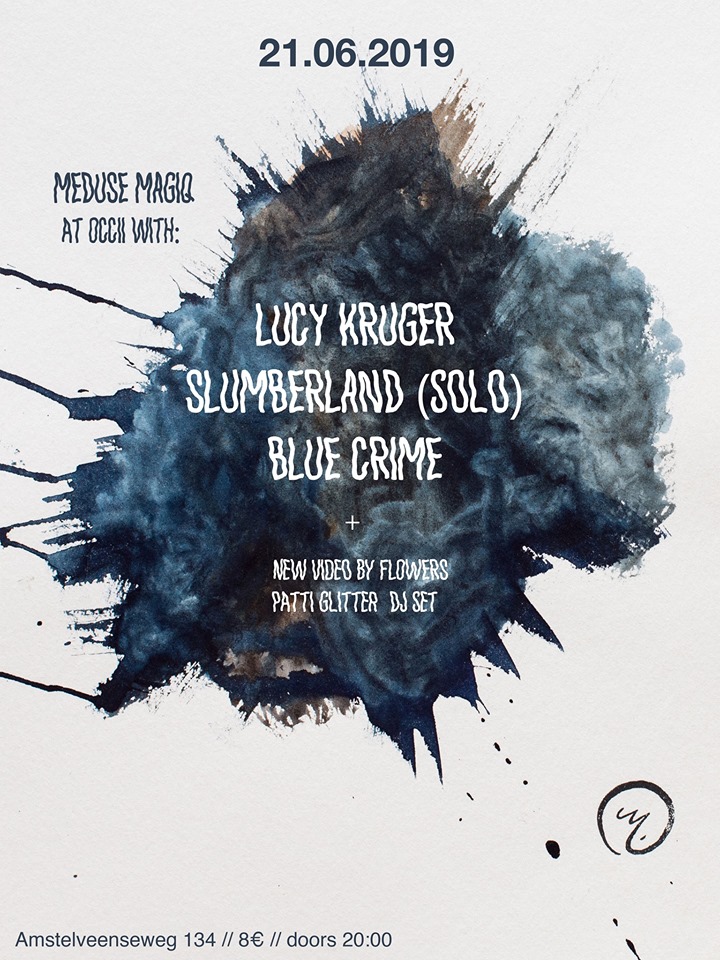 Summer solstice, midsummer, fête de la musique,
come out to OCCII on the 21st of June to dance to all of above with Meduse MagiQ.

Music by BLUE CRIME, who will play with new members and a new set. Since these new members all also have their own solo projects the house is full of other magic by the dreamy Lucy Kruger and the always mesmerising Slumberland.

For the latest album ‘Sea, sea, sea, drifter / See, see, see, drifter’ (Consouling Sounds), Slumberland has crossed the Atlantic, making landfall in Montreal to work with engineer/producer Radwan Ghazi Moumneh, amongst many others known from ‘Jerusalem in my heart’. As the unofficial sound guru for the Canadian label ‘Constellation’, he is right at home with the cinematic portraits and tribal realms of Slumberland. With his help, the album was recorded in a former refrigeration unit amidst the colourful Dutch tulip fields of Voorhout. Though there’s little evidence of this cheerful decor. This second album was mixed at studio Hotel2tango, Montreal, sounds murkier, rawer and more explosive than its processor.

Lucy Kruger
Lucy Kruger is a singer/songwriter from Cape Town, South Africa who now lives in Berlin. Her music focuses on the bare bones of the songs, a slow burning psychedelic folk that is both intimate and ambient. Lucy will be releasing her second full length album, ‘Sleeping Tapes for Some Girls’ through Unique Records on the 27th of September.

BLUE CRIME
Coming from separate mystical solar systems, and embracing different influences and methods, this collective implodes and explodes. Blue Crime’s strong imagery forms a tight symbiosis with the music–they dress to blend in with the spheric visual projections that swirl over and around them, adding another intriguing layer to what is a deeply immersive live experience. These visual elements are an almost ritualistic token between the individuals who’ve grown into one collective
unanimous voice.

After the 70’s cult era fad, we find ourselves in an the entropic modern day where ideas have been recycled and New Age stores open up a quick as a fast food joints. People need to feel routed and grounded to something. Blue Crime is a band that when you listen to their music, it changes how you feel about two parallel universes at the same time. Writer Alexandra Duvekot teaches us that rather than exploring a different age, we could look deeper into our past. To keep one foot
with our ancestors and one foot looking into the stars.

We will also premier a new video by doomcity band FLOWERS and DJ Patti Glitter will spin some tunes.