Blurt is an English post-punk band, founded in 1979 in Stroud, Gloucestershire.

Blurt: Let Them Be!

Founded by poet/performance artist Ted Milton in 1979, unclassifiable trio Blurt were associated with Factory Records during 1980 before moving on to pastures new. Albums include In Berlin, Blurt, Bullets For You, Poppycock and Friday the 12th. The band continue to tour and record, and released ferocious new album Cut It! in 2010.

‘funk from a funny farm’

Born in 1943, musician, poet and self-confessed ‘performance junkie’ Ted Milton had been around several creative blocks before meeting Tony Wilson in 1978. As a verse writer, his work appeared in the Paris Review and Children of Albion: Poetry of the Underground in Britain (1969), while as a left-field puppeteer in the Seventies he performed with Mr Pugh’s Puppet Theatre and the Blue Show, as well as supporting Ian Dury on tour in 1978. Ted also contributed a puppetry scene to Terry Gilliam’s 1977 comic film Jabberwocky. Few early Factory artists could boast such a colourful background.

Daylight’s wasted on her, this femme fatale only comes out at night. Not only does she organize shows in various venues, most recently the GRAUZONE Festival in the Melkweg (edition 2 will be held January 31 2014), you can also regularly find her behind the turntables with her impressive collection of vinyl. Postpunk, cold wave, synthpop; often dark and doomy, but always danceable. 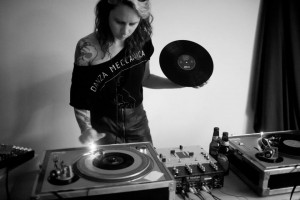 // BLURT //
English post-punk trio Blurt was founded in 1979 by poet and performance artist Ted Milton. They were associated with Factory Records during the 1980’s. Since this time they kept making new experimentel exciting albums.

// URBAN GREY //
Amsterdam based post-punk band Urban Grey played their first show in the OCCII just half a year ago. Poetic lyrics about a better world, friendship and nights out are empowered by driving guitars, synths and drumbeats.
Urban Grey

// LIFELESS PAST //
The haunting vocals and guitars from this Rotterdam based post-punk/new wave band could be comforting in this early winter.
† Lifeless Past †

// TRISH TRASH (DJ) //
A similarity between her Grauzone festival and dj-sets is the fine mix between classic and modern punk, post-punk, new wave and synth bands.
GRAUZONE FESTIVAL 2014