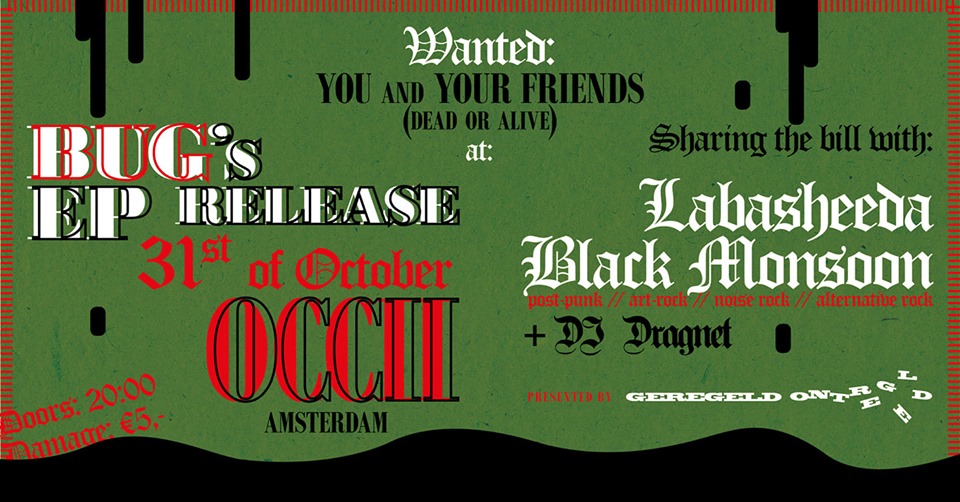 A night full of everything from intense Noise Rock to melodic Art-rock. A diverse evening with something for everybody.

BUG is an Amsterdam based band formed in the beginning of 2016. Following the tradition of bands like Husker Dü and Nirvana, their style can be described as a mix of raunchy punk-rock and experimental melodic pop. Members are Vincent de Bel (guitars/vox), Martijn Klippel (bass), and Klaas Dijkstra (drums).

Since they were formed in 2004, Labasheeda have built up a strong cult following from their unrelenting touring and recording schedule. Tours across Europe and Canada are where the band really holds their own, delivering intense and energetic performances.

“Experimental Noise Rock and Grunge from the Netherlands!”

Jamming into the dark, that’s songwriting for Black Monsoon. Melancholic vocals over gritty guitars and raw drums. Noise…, Grunge…, Period. That’s all what it takes for Black Monsoon to bring their impetuous Grunge in full-Noise live shows to the stage. Jacky (guitars, vocals), Marjolijn (drums, keys) and Teun (guitars, vocals) share their admiration for raw indie music styles that derive from the days of Sonic Youth and early Pixies and PJ Harvey.

In September 2018 Black Monsoon released their DIY music video “Silver” to announce the release of their first album, which the band had recorded with producer Joes Brands at SputnikStudio in Antwerp, Belgium. On the 6th of October the trio released their self-titled debut EP on vinyl. The release was celebrated by a sold out release party in the basement of Burgerweeshuis Deventer. This underground place in the Middle/Eastern part of The Netherlands is the band’s home from where the new songs arise.

After having played dozens of venues across The Netherlands the three now have started crossing the Dutch borders by setting foot to Germany, while they are stretching the boundaries of their musical experimentation. The band has supported bands as The Fresh & Only’s (San Francisco, California) and the David Nance Group (Grand Island, Nebraska).

‘Think of the raw and slower Bleach period of Nirvana, mixed with the most deserted stoner rock one could imagine’ -3VOOR12 (NL)