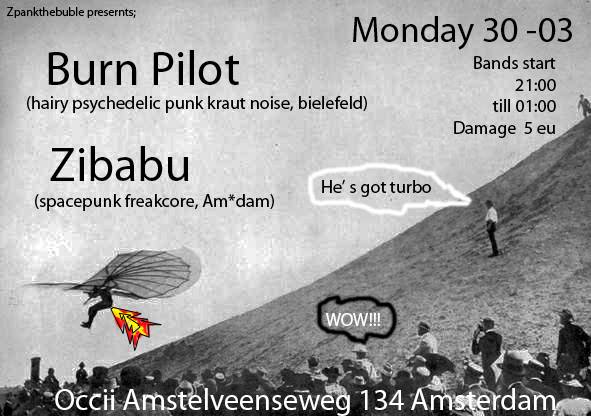 Burn pilot (hairyAmbientPsycadelicPunk Bieleveld, De)
3 strangers met on mars at the green girls bar in oxouyron city. master Joel :the master of green sabbaths and magic. murderer, tripper and stoner….he loves lollipops, blood, and the screams of a virgin at night spanky J:a fucked up son ..addicted to every drug in this galaxy, cowboy, huntin and longing for the ultimative orgasmic trip…he really likes big mama jane sidney foxx :an indian timetravler seachin for love, rollin around in his chevy timemachine, from planet to planet, born under a bad sign on proxima centuri(loolapalooza)…he enjoys green marsian girls all of them recognized that they all wanted the same :the ultimative cosmic psychedelic karmatrainride so from now on they had just one mission : rollin and rollin and rollin and rollin they triped thru the universe played some show allways lookin for the kick one day they traveled totally burned if you know what i mean thru time in the cheavy timemachine and rocked right into(thats how they got the name )a black hole because they were out of gas they were burned and landed on a fucked up planet named earth….
http://burnpilot.bandcamp.com/

ZIBABU (TROPICALspace punk skizo ska, ADM)
This triangle of energie consistius three intergalactic cleaning ladies. They have been traveling the universe trying to escape the ever consuming grey mass ‘shvna’. Now seeking refuge on the ADM where the shvna still has not fully taken controle they can bundle their powers with yours. With deadly ska hip-hop and hardcore combinations, lyrical lazer beams and a punk rock passion they combat the ever growing ‘shvna’ that is eating the soul of Amsterdam.