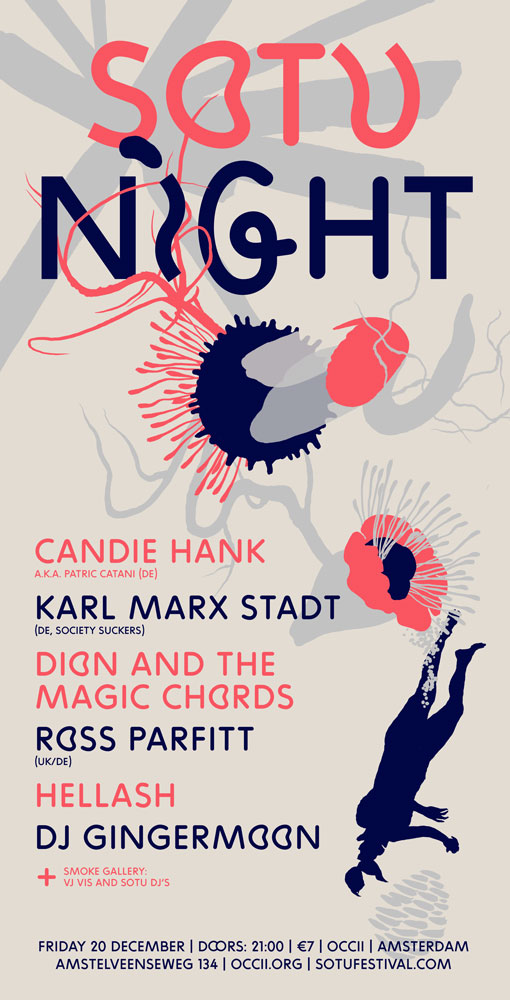 He got involved with electronic music after discovering the computer game music of the Commodore64 games, Bomb the Bass (Beat Dis), Public Enemy and other Electronic, Dance + Rap music of the mid- late 80s. After a passionate time of ripping his favourite music out of games, he moved on with using the old homecomputers for programming and sequencing his own sounds. Always being fascinated by unusual sounds, melodies and scratching, his way went straight to the early Techno, Breakbeat and Acid Hardcore Music which got played on certain Rave Parties like e.g. Cosmic Orgasm at that time.

Candie Hank
With Candie Hank he could create his own musical isle and even started to play shows secretly in the beginning not telling people that it´s him. Playing the first Concert in Berlin with Daelek and Angie Reed at their regularily self promoted Audio Chocolate nights, people were wondering where Patric went.. This way he could manage to get a new open minded circle of listeners and it turned out to be the ace up his sleeve.

By now Patric Catani is involved in the production of about 80 releases and he never stopped exploring new fields of music and sound art.

Patric Catani did also many remixes for artists like Kap Bambino, Ladytron, Jean Jaques Perrey and other side projects on various labels and compilations. His range of styles could possibly be described as an intense mixture of Electro, Swing, Rap, Soundtrack, Chiptune, Cumbia, Acid, Surf, Bass…. But actually no one really knows..

A cinematic, confronting journey through the eras of forgotten futurist lounge and Beat – He´s using the symbols of our darwinist pop society and the typical male stereotype character role model to appreciatively take it apart and dismantle the dictated, risk free attitude of the “New APP Order”. Hanks anarchistic approach taking and modifying statements in a plunderphonic way but giving it the spice and soul of Moog synths, 8Bit Roughness and the surreal twist of a Daniil Charms worshipping sample eating Bassmonster. Of course always in honour of Morricone, Rock Hunter, Hazil Adkins and the Euromasters.

Dion and The Magic Chords

Dion & The Magic Chords make electronic music with drums, casio chords and trippy visuals. They recently released there first record is called curiously enough ‘Curiosa’. Curiosa is a true curiosity in pop music. This is no jazz, no wave and no electro, but once it is all together and much more.

Dion and the Magic Chords – Casiotone

Noise music from greek. Improviser and experimental musician Charis Konstantinou is member of the improvising psychodelic absurdist band Brain Mastrubation. With a love for noise and exploding situations he will play some mad moments for you.

This Scottish mermaid swam all the way to The Netherlands, where she grew up in the small coastal town of Zandvoort. Unable to talk she decided to let the music speak for her, spinning records and mp3’s with a dark, romantic and sometimes humorous twist.

“He seemed to absorb the atmosphere and work in wavelike shifts to alter states” (Peter Taylor, Foxy Digitalis)