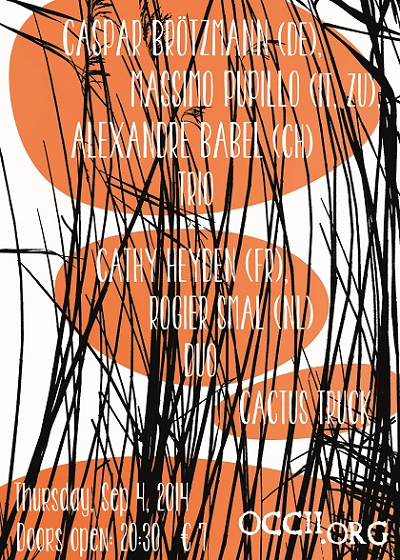 I’m happy to tell you that CASPAR BROTZMANN busier than ever.
He has a new trio featuring himself and MASSIMO PUPILLO on bass (ZU) + ALEXANDRE BABEL  on drums.
They d0 a world premiere. A unique show!!!  Not to be missed!!!

Caspar Brötzmann (born 13 December 1962) is an electric guitar player. He was born in Wuppertal, Germany.
While Brötzmann typically performs with the power trio lineup of Caspar Brötzmann Massaker (his early band), with guitar, bass guitar and drum set, he only uses rock and roll and heavy metal music as a basis for his music. Brötzmann’s technique has been praised: “…his attack on the instrument — explosive, obstreperous, large scale, textural, timbral — asserts the material facts of string-pickup-amplifier more bluntly than anyone else currently involved in rock.

Has been active as a bass player in the underground music scene of the city of Rome since his teenage years. He took part in the revolutionary experimental ensemble Gronge, an open project which blendedfree-jazz and noise rock with performance art. In 1997 he has founded ZU, along with Luca T. Mai (baritone sax) and Jacopo Battaglia (drums); the band has recorded fifteen albums so far, including collaborations with Eugene Chadbourne, Mike
Patton, Nobukazu Takemura, Dälek, King Buzzo (Melvins), and toured extensively in Europe, United States of America, Asia, and Africa.

Alexandre Babel is a Swiss born and Berlin based drummer and percussionist. He is involved in various contemporary contexts such as modern classical music, free improvisation, noise and performance art.
Babel feels equally at home performing the most complicated music by contemporary composers as when playing wild and sound-challenging drums in improvised situations. 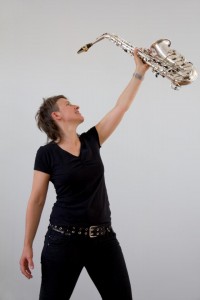 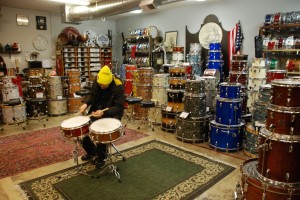 Cactus Truck creates startlingly intense music, not merely in terms of volume or velocity but through complete physical/psychological surrender. One can find hints of delta blues, early free jazz, Japanese noise, and no wave in the music. The band leaves audiences baffled everytime they play. The band started in April 2010 and has since traveled 1000s of kilometers on the ground and through the air as well as musically.. They played concerts in The Netherlands, Belgium, Norway, France, Switzerland, Austria, Italy, Slovakia, Slovenia. Cactus Truck loves collaborating, and does this very frequently. People like Terrie Ex, Jon Rune Strøm, Jeb Bishop, Nicolas Field, Peter Jacquemyn, Ab Baars, Han Bennink, Colin McLean, Teun Verbruggen, Dave Rempis, Hans Koch, Nicolau Lafeta and Gerri Jäger have been lending their qualities to versions of the band. 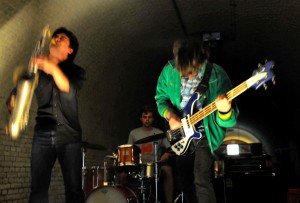 Their first official album entitled “Brand New For China!” was released in March 2012 on Public Eyesore Records (www.publiceyesore.com) and well received by critics world wide, describing the music with mere superlatives. Next to “Brand New For China!” they released a cassette tape featuring Terrie Ex as a guest on the Beyt Al Tapes label called “Macho Sex with Terrie Ex”, and a self made CD-R simply entitled Cactus Truck. After touring the Netherlands as part of the Young VIPs Tour with multiple guests, as well as touring Europe, Cactus Truck is getting ready for an epic tour all across the US at the end of 2012, which will include approx. 40 concerts. Cactus Truck definitely wants to take over the world, no doubt.

ALEXANDRE BABEL, CACTUS TRUCK, CASPAR BRÖTZMANN, CATHY HEYDEN/ROGIER SMAL DUO, MASSIMO PUPILLO
Bookings are closed for this event. No tickets will be sold at the door
Posted in IN O.K./OUT K.O.