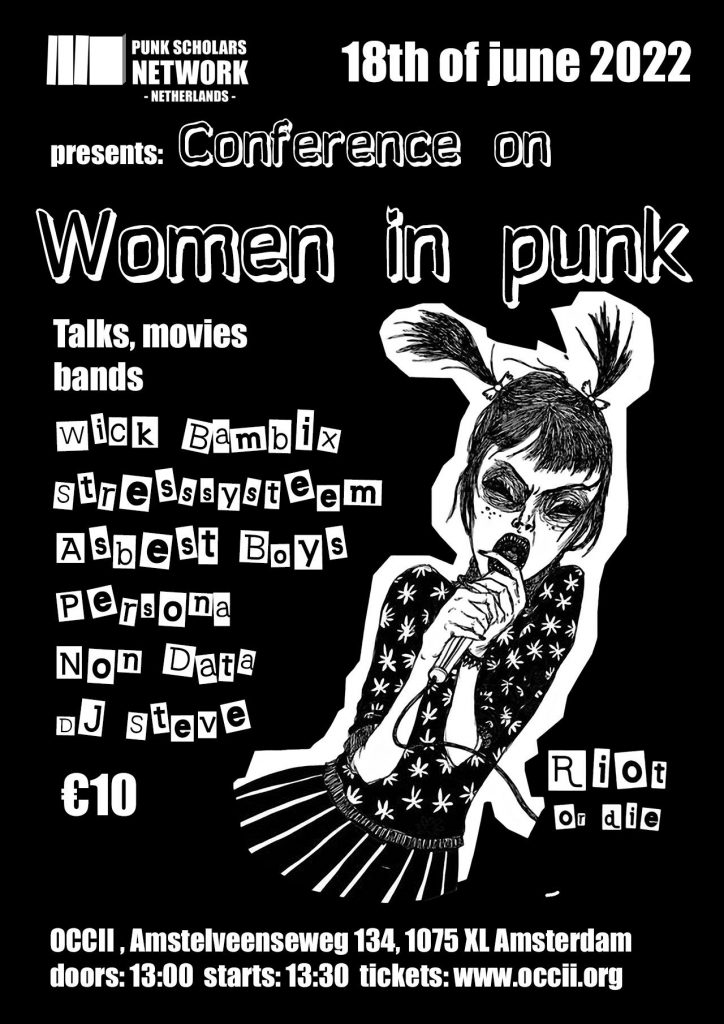 TiMELiNE:
13:30 Welcome from the organisers, and explanation about how the day will run
13:40 First panel: Women in punk in North America, in the UK and in the Netherlands, parallels and differences. Chair: Rosa Jonker
13:42 Film by Helen Reddington and Gina Birch (of the Raincoats): Stories from the She-Punks (music with a different agenda)

Chair: Anita Raghunath. Five women, interviewed by Helen Reddington, from first-wave punk woman to very recent one. One may ask: “What are the connections between these four generations of punk women?”

2020s representatives (two, as it it is the most important wave for the future) : Nana, guitarist of the band Shortcuts, founded in 2021, and Flo, bass player in the Blood Bags.

17:20 Some people in the audience may want to say something

18:00 Dinner (at the vegan restaurant MKZ >> eerste schinkelstraat 16, around the corner of OCCii).
20:00 To concert hall
20:15  Four bands, all including women. Stresssysteem, Wick Bambix, Persona Non Data. And Asbest Boys, not an all-boy band, like Poison Girls were not all-girl.

Read about, and hear, all these four bands here.

Asbest Boys live at Jasper's House
Last December, because of an unexpected rise in the coronavirus  pandemic, at the last minute we had to cancel the first-ever face to  face conference of the Punk Scholars Network the Netherlands at OCCII,  Amstelveenseweg 134 1075 XL in Amsterdam with as its main theme Women in punk, replacing it with a short webinar on Punk and venues.
On this Facebook link https://www.facebook.com/watch/?v=207667054852132&ref=sharing,
Read more at https://www.punkscholarsnetwork.nl/conferences/four-dutch-punk-women-1977-now-18-june-conference/

Film: Stories from the She-Punks, PERSONA NON DATA, Punk Scholars Network, WICK BAMBIX
Bookings are closed for this event. 150 tickets will be sold at the door

It’s a warm, breezy Saturday evening in Manchester and the Spice Girls are playing the Etihad Stadium. Over near the student quarter Manchester’s 02 Ritz is playing host to North West Calling, a punk festival headlined by Slaughter and the Dogs. It’s a strange juxtaposition but it seems weirdly appropriate given that, between these two extremes, another, quieter event is taking place that would speak to both audiences if only they would listen.

The documentary film Stories from the She-Punks has been made by musicians Gina Birch (The Raincoats) and Helen Reddington (alias Helen McCookerybook of The Chefs). It seeks to redress what can only be described as a jaw dropping level of cultural amnesia in the UK as regards punk (and women in cultural scenes more generally) by telling the stories of punks forgotten women. 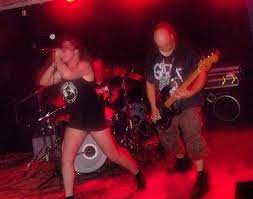