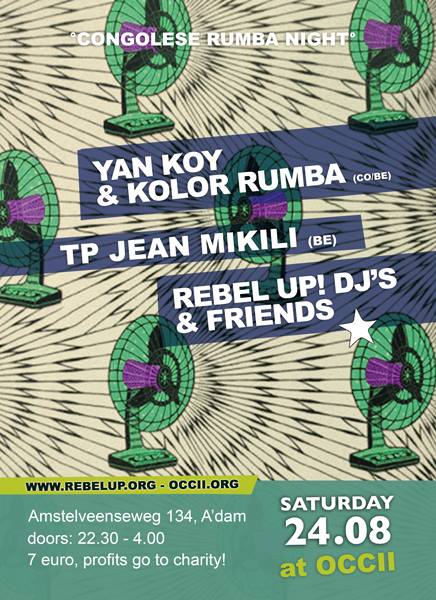 We’re very proud to have 2 special rumba bands playing live on stage to fully lose yourself in this addictive rumba rock sound. Here’s the roll down > > >

This Congolese band from Brussels plays vintage Congolese rumba soukous songs from the 60′s to 80′s, with master members Petit Poisson, Pappy Muntu, Alonzo Baba and several others who in the golden days played in famous Congolese bands such as Franco’s OK Jazz, Zaiko Langa Langa and Demba. In a 2 hour live set, they will play lots of classic rumba songs and take you into the Congolese underbelly of tropical rock with psychedelic guitar solo’s, hypnotising percussion and polyphonic vocals. Certainly not to be missed, ca va chauffer kitoko!

Belgian trio from Brussels that specialises in Congolese rumba with fresh indierock while keeping it real for all to swing and shuffle along to. It’s gonna be *Tout Puissant* for sure as perfect warm-up to Color Rumba!

dj’s Rebel Up! & friends!
Congolese & African sounds before & after the bands.

Doors will open at 22h, first band to play around 23h

For one time it”s 7 euro’s in (but 5€ if you become before 23h!), as we don’t often have 2 groups playing on our nights, especially no Congolese bands with lots of musicians! 🙂