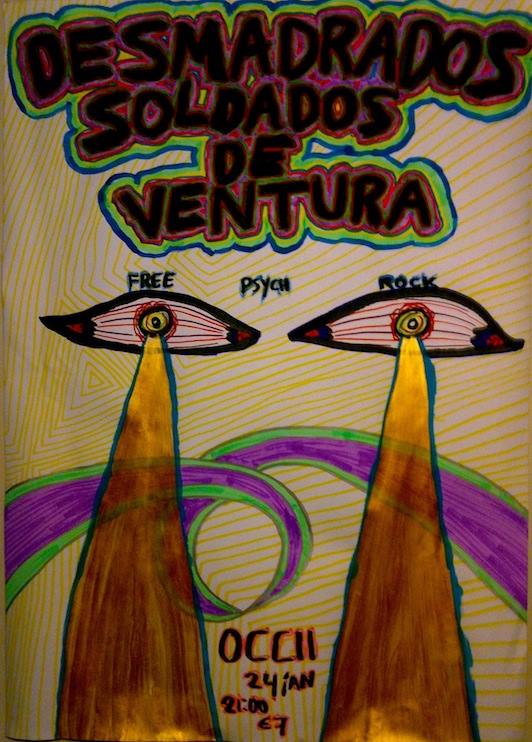 “This is some of the most intense, not-giving-a-fuck, freestyle psychedelic rock put to tape this year. Just as Fungal Abyss was ruling the tape realm with their psylocybin behemoths in 2011, Desmadrados Soldados De Ventura are ready to take over the wheel with their freight train of overdriven sound” Weed Temple

“A righteous nod in the direction of what psychedelic rock, unburdened of its newfound marketing status, should really be like, this monstrous UK jam session comes on like a triple-header to the dome and dances dervish around your skull… Any fool could get their medulla oblongata steamed, pressed and boxed by mere exposure to this beast. Maybe it’s your turn.” Doug Mosurock, Still Single

“As each of the four side-long jams unfold they build into the kind of trance-inducing constructs that short-circuit thought while touching on the desperate ascension style of Albert Ayler’s New York Eye & Ear Control Group, complete with that same weeping, testifying tone, with heavenly vibrato traded for endless wah-wah. At points you can feel them nodding toward the kind of rock dinosaur-ism that has yet to enjoy underground rehabilitation – Lotus-era Santana, for one – and it’s all the more thrilling for it, with the group straddling pre- and post-noise strategies without any of the guilt or militancy of the tabletop noise crew… Of course, guitars have long been middle-brow targets for commentators as somehow signifying everything that was cock-bound and self-aggrandising and technically impudent about rock music. But when it’s played like this, with a blurring of technique that allows a bunch of northern punks access to the combined freak potential of more than a half century of electric six-string excess, it’s a reminder of the electric guitar’s uncanny ability to respond not just to where it’s been, but to where it’s at.” David Keenan, The Wire, Feb 2014 issue

S/T full-length LP out now on Golden Lab. S/T cassette album out now on Feathered Coyote. New LP ‘Striiide’ due out on Deep Distance in Sept. Touring party will include the full 6-piece band.

(Frankie Vis & Stephen Doyle)
Frankie Vis is founder of plattegrond records, DJ, noise artist, mad vocalist and conspirer with many of amsterdam’s greatest free improv/noise musicians. He is known for his humour and willingness to engage with all those witness to his performances. Unpredictable, chaotic, those present never know who is fully in control. Stephen Doyle is a free improv musician/vocalist who plays in amsterdam improv groups dagora and the lock. He is know for his willingness to step outside the boundaries of the conventional audience/performer set-up. Together they combine to create a vocal duo with percussive interludes, freaked out noise and an open door that anything can come through.
http://www.plattegrondx.com/