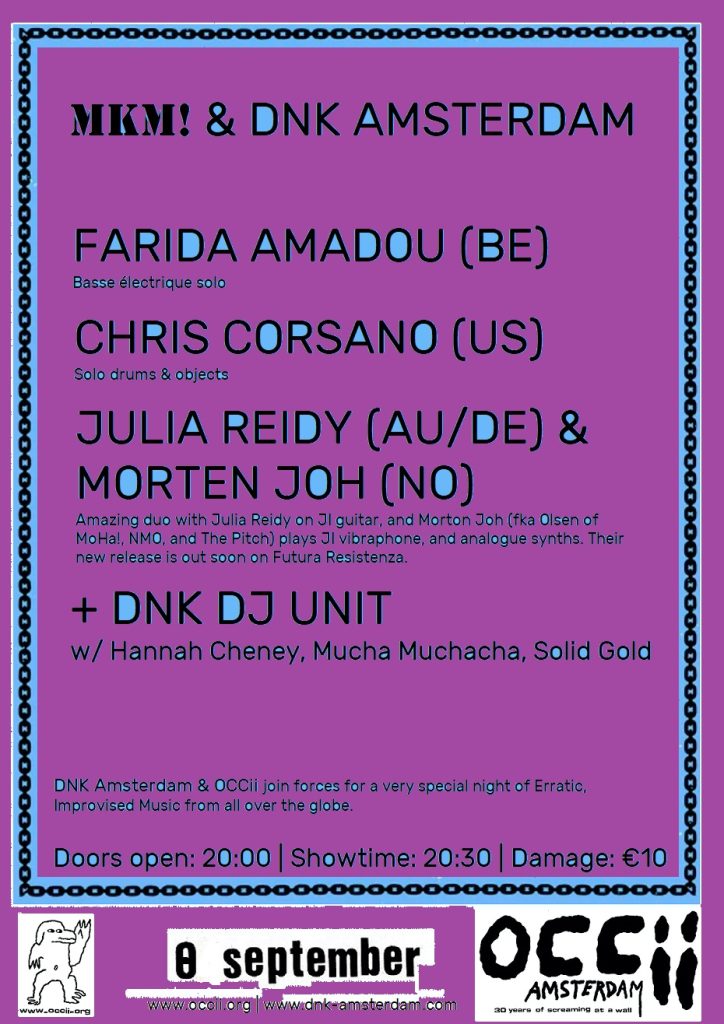 FARIDA AMADOU (BE)
Basse électrique solo
Farida Amadou is a self-taught bassist (and ex-bass guitarist in the punk/noise band ‘COCAINE PISS‘) based in Liège, Belgium. Since 2011, she has been exploring the various sonic possibilities of her favorite instrument, whether solo or collaborating with two many other musicians, including Peter Brötzmann, Thurston Moore, Mette Rasmussen and Julien Desprez. On stage, Farida Amadou becomes one with her bass, her amp, her effects pedals and the frequency flows she generates, playing short concerts full of electrical tension.

CHRIS CORSANO (US)
Solo drums & objects
Considered by many to be one of the best drummers in activity, Chris Corsano has developed over the years a percussive language of extraordinary amplitude and infinite resources. Able to play absolutely everything (from incendiary free jazz to the most explosive noise, passing through the most adventurous rock and pop), he has played with figures of free jazz (Joe McPhee, Paul Flaherty) of noise (Bill Nace , Bill Orcutt, C Spencer Yeh) and pop (Björk). A virtuoso of her instrument, the American drummer questions her playing at each of her (rare) solo appearances, plunging headlong into the purely questioning matter of her instrument, seeking again and again new directions and possibilities.

JULIA REIDY (AU/DE) & MORTEN JOH (NO)
Amazing duo with Julia Reidy on JI guitar, and Morton Joh (fka Olsen of MoHa!, NMO, and The Pitch) plays JI vibraphone, and analogue synths. Their new release is out soon on Futura Resistenza.