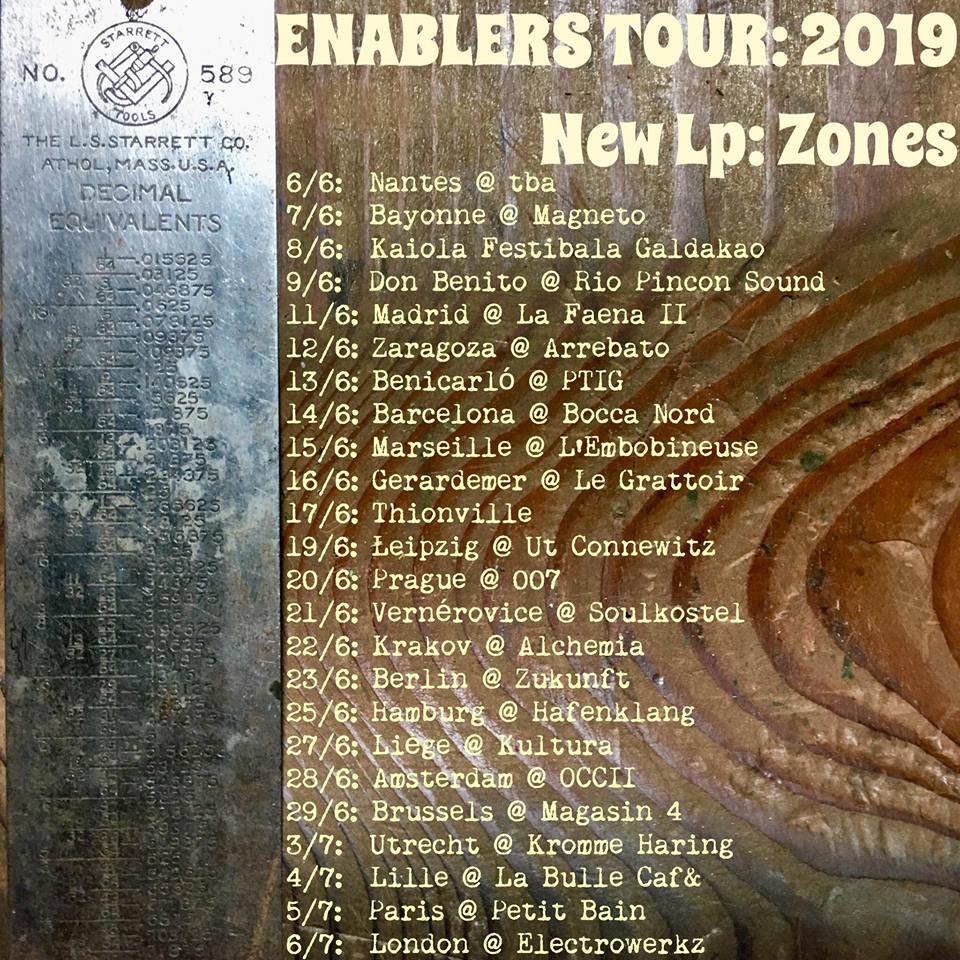 Since the 2004 release of their first LP, End Note (Neurot Recordings), Enablers have established a new direction in spoken word music. The prose and poetry of Pete Simonelli is intricately woven into the dynamic interplay of guitarists Joe Goldring and Kevin Thomson, and has been punctuated by compulsive and precise drumming of changing drummers, among them such illustrous names as Doug Scharin, Yuma Joe Burns and now Sam Ospovat. Musically, the compositions range from melodic minimalism to heavy, rhythmically challenging thickets of sound.

The 2019 LP, Zones— a dual release by Lancashire and Somerset and Exile on Mainstream again — is a further example of Enablers’ push for musical expansion and growth. Zones represents a band that is increasingly more comfortable with experimentation and improvisation, while continuing to embrace all the musical elements that have established their sound for close to twenty years. This has produced a fully realized record that further cements the band’s refusal to be pinned down by category or genre. Zones is the impetus for the 2019 tour.

In 2005 Gerben Houwer (We vs. Death) wrote the first The Fire Harvest song. After a first seven song EP in 2012 (Subroutine), two European tours and a Record Store Day split seven inch with Belgian band Reiziger, the Utrecht-based band changed from a side project to a priority. In 2016 The Fire Harvest released their first album ‘Singing, Dancing, Drinking’ recorded by country artist Daniel Romano. Followed by several international tours. Late spring 2018 brought the band back to the studio together with Canadian songwriter, long time friend and touring buddy Michael Feuerstack.

You’d be forgiven to think that not having a story and not striving for success or money are goals in themselves. However, the four members of The Fire Harvest are just pure music lovers, survivors of a rich music scene that originated in the Dutch city of Utrecht in the nineties. The slowcore / indie rock quartet released their second album ‘Open Water’ in March 2019. A record that is stronger and more melodic, but still flirts with the desolate ambiance that makes The Fire Harvest an act on their own.

British multi-instrumentalist AJAY SAGGAR has been involved in making music for over 30 years, evolving from one acclaimed band to the next. Starting out in the late 80s, with John Peel favourites, “Dandelion Adventure”, he moved on to underpin his musical tapestry in bands such as “Donkey”, “The Bent Moustache”, “King Champion Sounds”, “Deutsche Ashram”, “The Common Cold”, and “University Challenged”. For anyone who has been under the spell of one or another of his previous / present incarnations, then BHAJAN BHOY is another thrilling musical gift to cherish. Venturing on a solo plain, the music reaches out to the stars in the same vein if Popol Vuh jammed with John Fahey, Grouper, and Robin Guthrie,
to produce a beautiful, calm and ethereal soundscape in which the listener can sink into and float downstream.

BHAJAN BHOY, ENABLERS, THE FIRE HARVEST
NO PRESALE, TICKETS AT THE DOOR, CAPACITY 250, CASH ONLY AT VENUE
Posted in IN O.K./OUT K.O.