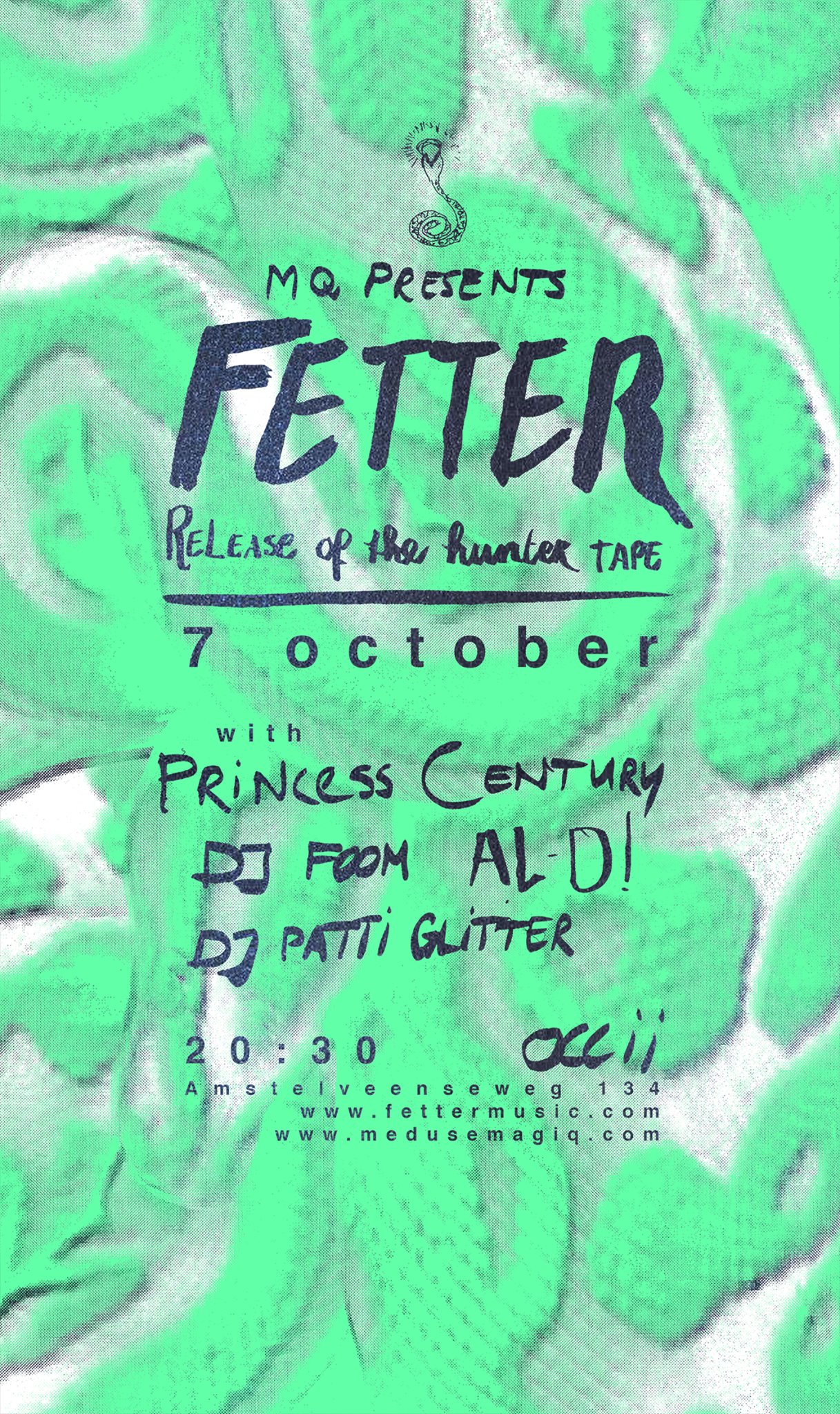 On the eve of Friday October 7th, MQ and Fetter invite you to come celebrate the Release of the Hunter Tape! Put on your finest snake suits and dance the night away into oblivion!

FETTER
With foggy, stumbling synthetic rhythms and tenderly woven vocal tapestries, Fetter produces layer by layer a haunting, arresting noise-pop. With a warm voice guiding you through a saturated wilderness, Fetter’s sound bridges the lo-fi surrealness of experimental electronics with the drama and magnetism of pop, resulting in a supple and hypnotic industrial synthpop you can dance and weep to.

Having spent the springtime months in Berlin conjuring up songs and visuals for a new album, this October Fetter reveals a mini-EP featuring the two singles “Hunter” and “Stickie Self,” a tantalizing preview of the full-length album to come in 2017. Incorporating noisy yet unavoidably danceable textures, Fetter’s latest work reclaims bliss in catastrophe and invites us to find refuge in absurdity through stories of disappearing aircraft, selfie-deaths, fertile wastelands, and the curiously persistent urge to procreate. Join us to get your hands on the freshly pressed and printed tape!

PRINCESS CENTURY
Shooting stars and icicles glimmering weave a reflective thread while mechanical pulses ground soaring delicious keyboards that could melt the heart of a cobra. An active member of the Toronto music scene, Maya Postepski has been making music for over 10 years, currently as part of electronic group Austra (Paper Bag Records/Domino). She is a prolific remix artist, DJ, and she co-wrote and produced TRST with Robert Alfons as Trust (Arts & Crafts). In her solo project, she takes us on a journey through minimalist cosmic disco psychedelia, crossing through glacial poly-rhythmic territories soaked in dark dripping goo.

AL-D!
Alexa D Saster is a DJ and crossover artist based in Berlin.
Under the name AL-D! she runs her indie-electronic solo-project, where she combines electronic sounds with vocals and electric guitar and works with loops and effects.

Doors: 20.30
Cassette tape available for the first time at the party!!

Meduse MagiQ is a music label based in Amsterdam.
It is a community for musicians by musicians. Artists are invited to play and collaborate on MagiQ nights with concerts, exhibitions and performances. More music, radio & underwater love on medusemagiq.com