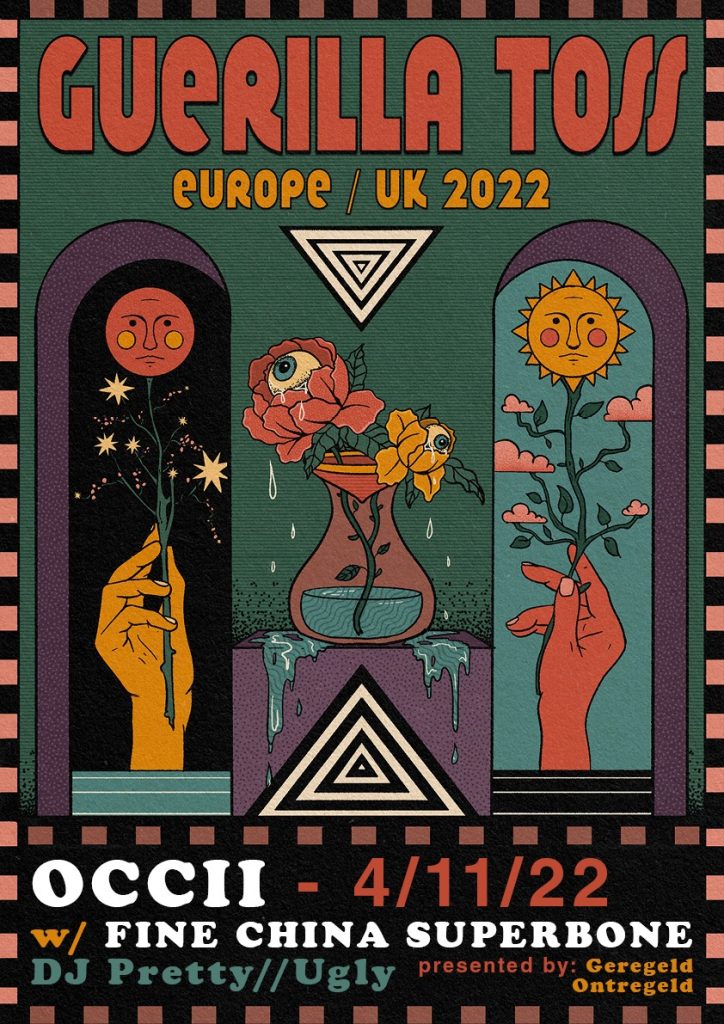 Dig deep enough inside yourself – start treating your body as your sanctuary rather than your enemy – and eventually you’ll find yourself blooming right back out into the sun. That’s the transformation Guerilla Toss trace on their newest album Famously Alive, their effervescent Sub Pop debut. After a decade sprinkling glitter into grit, building a reputation as one of the most ferociously creative art-rock groups working, the upstate New York band have eased fully into their light. This is Guerilla Toss at their most luminescent – awake, alive, and extending an open invitation to anyone who wants to soak it all up beside them.

Singer and lyricist Kassie Carlson, multi-instrumentalist Peter Negroponte and guitarist Arian Shafiee wrote Famously Alive at home in the Catskills during the pervading quiet of the pandemic year. The uncertainty of COVID-19 lockdowns and the total disruption of routine forced Carlson to negotiate with herself in new and challenging ways. “You have to be with yourself all the time during the pandemic,” she says. “I had to figure out a way to manage my anxiety. The pandemic was hard, but it helped me get comfortable inside my own body. My peace of mind came out of being thrust into the deepest shit. This album is all about being happy, being alive, and strength. It’s meant to inspire people.”

The album’s title derives from a poem written by a close friend of the band, Jonny Tatelman, who supported Carlson through the early stages of her recovery from opiate addiction. The poem comprises the entirety of the lyrics to the title track, an exuberant ode to loving your own survival and charting a course into unconditional self-acceptance. “The song ‘Famously Alive’ is about living with purpose and excitement whether you’re famous or not, accepting your strangeness and thriving even if your successes look different than other people’s,” notes Carlson. “To me, ‘Famously Alive’ means flipping the notion of dying famously to living famously,” Negroponte adds. “I also like to think of it as a way to describe living through something traumatic and coming out of it a stronger, wiser person.”

Songs like the expansive, gleaming “Live Exponential” similarly invite the listener to lean into the light. “It’s about loving yourself and finding a way to be comfortable in your own body – to live life to the fullest and beyond,” says Carlson. Throughout the record, Guerilla Toss meet themselves with curiosity, generosity, and acceptance even for the harder parts of being alive. Opener “Cannibal Capital,” a song about the exhaustion and dread of social anxiety, came together in a flurry toward the end of the album’s sessions. A taut bass groove erupts into competing squalls of guitar and synth that support one of the most immediate and arresting vocal hooks of Guerilla Toss’s catalog to date.

Together with guitarist Arian Shafiee, Carlson and Negroponte cultivated a sound that spliced together psychedelic texturing and Krautrock syncopation with the gloss and glow of contemporary pop music. “I like to combine as many musical influences as possible,” says Negroponte. “We thought the sleekness of current radio pop would make our dense wall-of-sound aesthetic both more bizarre and more accessible and fun at the same time.” Carlson was similarly inspired by a wide range of artists from around the world after diving deep into obscure 7-inches for her weekly show on Radio Catskill, Rare Pear Radio.

While writing the album, Carlson took voice lessons online for the first time. Though she has been singing since she was four years old, at first with a vocal harmony group in her family’s church, she hadn’t formally trained her voice since joining Guerilla Toss. The lessons allowed her to deepen and broaden her range, helping her feel more embodied and connected to her voice. Underneath ripples of Auto-Tune, playful, searching vocal melodies suspend lyrics about reaching for yourself and holding fast in your own love.

Famously Alive finds Guerilla Toss coming into the fullness of their power, celebrating their prismatic idiosyncrasies from a place of optimism and abundance. “It felt like I didn’t need to force myself into this dark place to create anymore,” Carlson says. “For the first time in my life, I feel like I’m finally comfortable inside my body.”

“The trio’s latest is a beautiful mess of squelchy psych-pop.” — Pitchfork

FINE CHINA SUPERBONE are a noise-/mathrock outfit from The Netherlands that started out around the year 2000 and soon got a reputation for their manically raging noise/punk rock shows that were known for disruption and chaos. The release “How long is a Chinese” (2002) reflects the sound of that period, influenced by bands like Unsane, Dazzling Killmen and the like. After the vocalist left the band they continued as an instrumental fourpiece.
No vocals meant freedom to use more layers and complexity in the songs, of course without losing track of the vintage FINE CHINA SUPERBONE chaos and nervosity, with the guitar riffs twisting and grinding all against each other, and around the quirky patterns laid down by drums and bass. The second release ‘Make Machine’ (2010) found its way from the famous Next to Jaap studio to the famous Narrominded label.
Since about 2012, FINE CHINA SUPERBONE are back in the original threepiece form. With a back to basics filthy distorted sound, loads of new riffs and ideas, and the return of the human voice. All of this resulting in a bunch of abrasive, twisted, post noise/math rock. Nerve racking at times, a little evil; fuckin’ nasty, brother! But in the end, no harm is done to your souls; we just like to wrench your gut a little, not kick you out into the dark. No! Have another drink!
In 2017 they found themselves playing tighter than ever, and so it was time for another album, which they recorded and mixed in the great city of London in january 2018 with Wayne Adams at his Bear Bites Horse Studio – a place where many other great records were recorded (USA Nails, Death Pedals, N itkowski to name a few). This fine record ‘Plaguey’ was presented to you by the Geertruida record label. Great cover art was provided, like for previous FCSB releases, by Dutch artist Zeloot.
At present they are busy writing material for a new album.

DJ Pretty//Ugly, FINE CHINA SUPERBONE, GUERILLA TOSS
Bookings are closed for this event. 50 tickets will be sold at the door
Posted in Rock