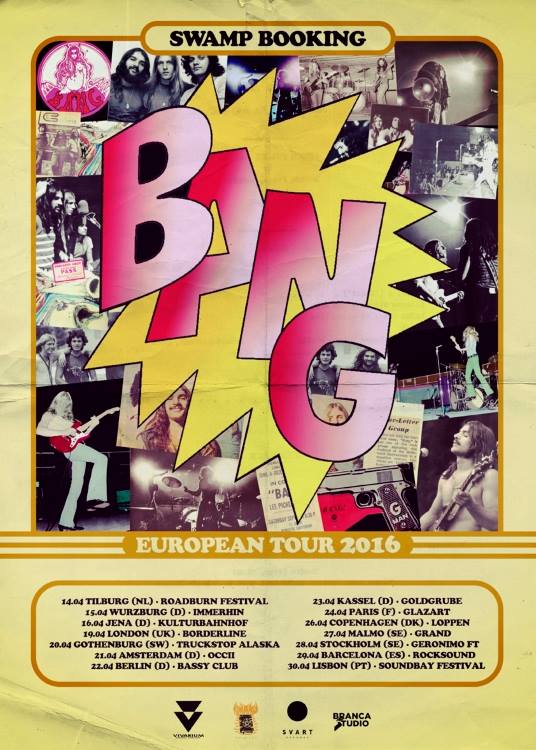 BANG, is back! With the heaviness of Black Sabbath and Led Zeppelin, coupled with the groove of Grand Funk Railroad, BANG released three critically acclaimed albums on Capitol Records in the early 1970’s before disappearing for a number of years. 2015 marks the 43rd anniversary of BANG’s critically acclaimed debut album and the band is celebrating with plans a major tour.

The 1971 self-titled debut album ‘BANG’ is considered an important forerunner to the early Doom Metal genre. Undoubtedly one of America’s heaviest ‘proto-metal’ bands from the period, BANG also had a strong sense of melodic power. The band’s versatility and songwriting skills are second to none. Highly regarded as a cult act by many for years, it’s now time for this truly amazing rock band to be enjoyed by a new audience worldwide!

Back in the spring of 1972, BANG was shaping up to be the proverbial ‘next big thing’. Signed a few months earlier to Capitol Records, the band’s first single “Questions” was taking off in the Billboard Hot 100. With the enthusiastic support of their record label, the trio’s self-titled debut album was also climbing in the charts. The group’s management had them opening shows for just about every major band of the era. Moreover, BANG had recently opened for their all time favorite band Black Sabbath, and by common consensus of opinion, stole the show! With two band members, guitarist Frank Gilcken and lead singer/bassist Frank Ferrara, still in their teens, and drummer/lyricist Tony Diorio, BANG seemed to be unstoppable.

With the mutual love for obscure, groovy, heavy and fuzzed out music from the 1960s and 70s, soon Gianni and Timothy found themselves spinning their record collection on The Hague’s underground radio station, Radio Tonka. With the addition of drummer Lennart Jansen, Supersonic Blues was a fact. Expect some nice jams, inspired by the likes of Jimi Hendrix, Blue Cheer, the MC5, Cream and even some hints of funk and soul music!