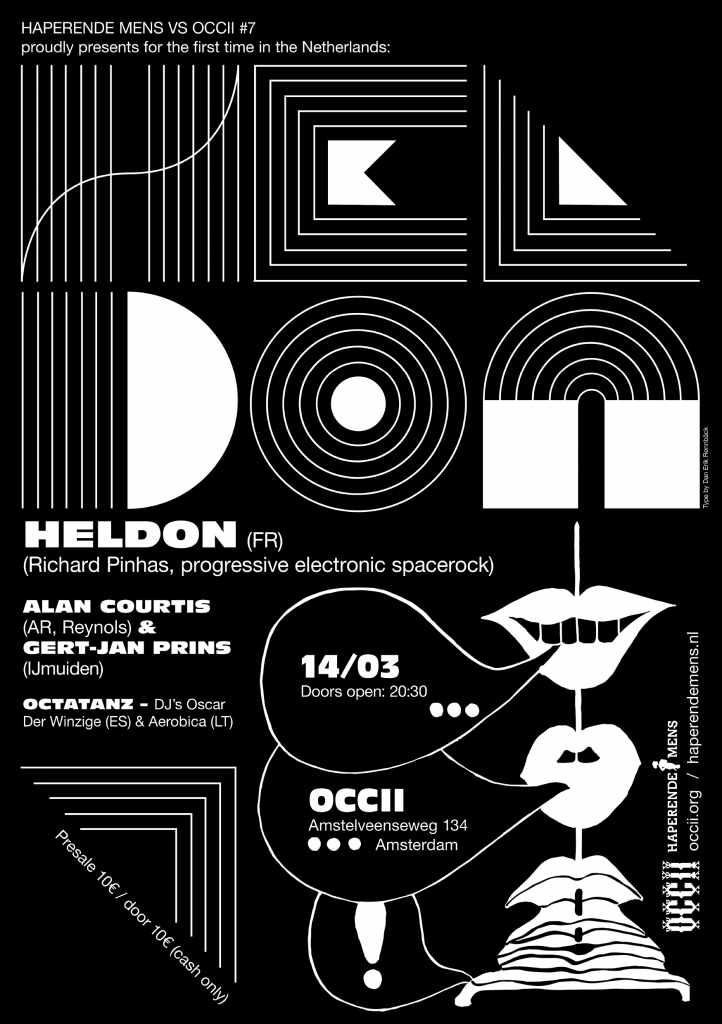 We are beyond excited to announce the first ever concert in The Netherlands (!) by legendary French band Heldon led by guitarist Richard Pinhas!

Already since the early seventies Heldon is one of the pinnacle French bands of electronic experimentation, cosmic soundscapes and the psychedelic prog-rock explosion. Richard Pinhas, having released dozens of albums both solo and with Heldon, is without a doubt one of the most important French underground musicians who kept true to his musical visions until today. His dreamlike guitar moves combined with modular synthesizer experimentation inspired by Robert Fripp and Brian Eno has given Heldon an important place in the historical development of electronic music, next to some of the most known Krautrock groups. Pinhas played with numerous important French musicians including members of Magma, Gilbert Artman (Lard Free/Urban Sax), Patrick Gauthier and many more. He was also student and friend of philosopher Gilles Deleuze who collaborated with Heldon in the 70’s. The musical themes of Pinhas vary from Deleuze’s rhizome theory to radical politics to science fiction creating a special musical universe of its own.

On March 14th this unique concert will take place at OCCII Amsterdam which cannot be missed!

Alongside Heldon there will be a support act: the duo of Dutch experimental music composer Gert-Jan Prins and Alan Courtis of Argentinian cult-band Reynols.

Behind Octatanz are two people who accidentally met through their shared interest in music in October, 2012. Oscar der Winzige (Oscar Olias Castellanos) and Aerobica (Matas Labašauskas) who are founders and initiators of the Braille Satellite Festival in Lithuania.

Together they offer a selection of ideas floating around in the deepest recesses of musical sub-culture. You will discover some artists or composers, which might be hard to find anywhere else because they usually don’t belong a label. Some of the authors produced a valuable number of records, while others dedicated themselves to audio-cassettes as a media for expression. Between them a few approached commercialism, however, most made no attempt in this direction. What, in fact, binds these diverse characters together is their valiant efforts to express a range of thoughts, feelings and atmospheres utilising conventional aural art as their experiences, perceptions and fantasies allowed.