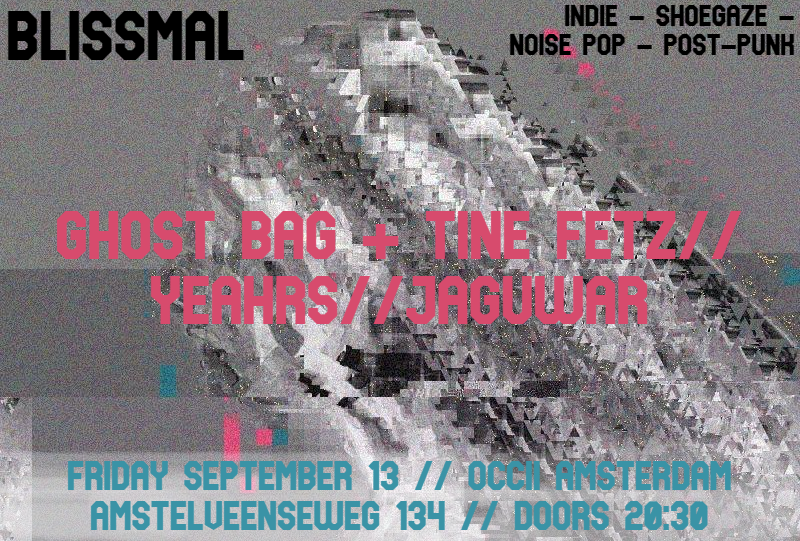 Made possible by Geregeld Ontregeld

Blissmall presents: Overwhelming frequencies from Germany and the Netherlands.

Jaguwar began life as a trio, formed in Berlin by Oyèmiand Lemmyin 2012. Their drummer Chris signed up in 2014 to complete the current line-up. Thus far they have released two EPs on the US label Prospect Records and have played countless shows in the UK, Denmark, France, Serbia, Germany and beyond. They have shared the stage with acts like We were promised Jetpacks,Japandroids and The Megaphonic Thrift, resulting in many happy faces and ringing ears.
File under: wall of sound, shoegaze, noise & pop. It is by no means injurious to surmise that My Bloody Valentine have had (and continue to have) some small, yet significant, degree of influence on Jaguwar.

A young and very anticipating three-piece from Berlin flying somewhere in between the clouds of dreamy shoegaze and catchy postpunk.
A beautiful and energizing musical trip in the vein of Nothing, Pity Sex and Slowdive.

‘Ghost Bag & Tine Fetz’ is the outcome of a long distance correspondence between Netherlands based musician Nick Jongen and Berlin based illustrator / comic artist Tine Fetz.
“What started as the loose concept of “Tine draws, then Nick records” turned into an artistic and personal dialogue that neither of us saw coming. It took two intense months to shape this project, sharing secrets and getting closer along the way. Drawing and recording every free minute we had, ‘Ghost Bag & Tine Fetz’ became the narrative of our fever dream.”

Nick will play guitar and Tine bass while Tine’s illustrations are projected on-screen.

A beautiful example of Tine’s illustrations accompanying their music.